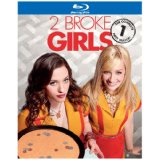 Everyone on TV has nicer clothes and a bigger house than you do. And I’m not just talking about TV doctors or lawyers. Even small-screen characters with relatively modest incomes manage to live in palatial apartments. (Friends is probably the most famous example.) We complain about how unrealistic it is for a barista and a line cook to be able to afford such a nice place, but part of the appeal of turning on the tube is temporarily turning off our real-world problems.

CBS’s 2 Broke Girls — along with Fox’s Raising Hope and ABC’s The Middle — seeks to follow in the blue collar sitcom tradition of shows like Roseanne and Sanford and Son. (Though 2 Broke Girls is nowhere near as good as either of those shows.) Despite the fact that their apartment is big enough to literally fit a horse, 2 Broke Girls is one of the few shows on TV where the main characters actually worry about money. (Not counting shows where the main characters are gangsters or meth dealers.)

Kat Dennings (Nick and Norah’s Infinite Playlist) stars as Max Black, an acerbic and relentlessly sarcastic waitress at the Williamburg Diner in Brooklyn, a greasy spoon of a restaurant purchased by diminutive Han Lee (Matthew Moy) from the Russian Mafia. The rest of the diner’s colorful staff includes Earl (Garrett Morris), the old cashier who likes to reminisce about the 1960’s (including all he drugs he did) and Oleg (Jonathan Kite), the Ukrainian chef who always seems to have a disgusting sexual come-on in his holster. (Sample punchline: “I’d like to Gisele on your Bundchens.”)

At the start of the series, the diner gets a new employee in Caroline Channing (Beth Behrs), the newly-bankrupt daughter of a Ponzi schemer. Initially, the bulk of the comedy comes from the fact that Max and Caroline are polar opposites, both in their attitudes and in their physical appearance. (Caroline is blonde, skinny and sweet, while Max is dark haired, busty and sour.) But as the season goes along and the girls work toward their goal of saving $250,000 to start a cupcake business — there’s a running tally at the end of each episode — I liked that Max and Caroline had each other’s back, whether they were battling ex-boyfriends, self-doubt or hipsters. (This show has an amazing amount of disdain for hipsters.)

Another chunk of the comedy comes from a surprisingly high amount of raunchy jokes — “It would’ve been nice to put my wad in his face for a change” — for a network show that aired during what used to be the family viewing hour. (2 Broke Girls will move from Mondays at 8:30 p.m. to 9 p.m. this fall.) Then again, the show was also TV’s #1 new comedy last year, so no one seemed to mind. (I’m no prude and some of the jokes land really well, but too many of them are simply groan-worthy.) In an era featuring some of the most daring and sophisticated comedies to hit the tube — like Community and Parks and Recreation, not to mention a bunch of cable offerings like Louie — 2 Broke Girls seems almost curiously outdated. It’s an especially odd choice for a show that wants to have a cutting edge sensibility and features two young protagonists

Besides the multi-camera format and laugh track (it seems like CBS is never letting those go), the show’s supporting cast seems to come from a simpler, less enlightened time. Morris (an original Saturday Night Live cast member) knows his way around a joke and fares the best as Earl, the only person Max openly likes. But in the end, he’s just another variation of Sassy Black Guy. Kite quickly drops in and out of scenes with his lewd jokes, so he doesn’t have time to get on your nerves. (Plus, some of his come-ons are so stupid, they cross over into being really funny.) I wish I could say the same for Moy’s Han Lee. Yes, most of the jokes at Han’s expense are digs at his short stature left over from The Fresh Prince of Bel Air, but that doesn’t stop the character from being an unfortunate stereotype and a constant punchline. Jennifer Coolidge (American Pie, Best in Show) debuts in episode 14 as Max and Caroline’s Polish neighbor Sophie, and the overqualified actress somehow wrings laughs out of a character that is entirely painful on paper.

It’s not so much that I find these stereotypes offensive, I just find them as obsolete as the idea that Brooklyn is some sort of apocalyptic outpost of New York City. 2 Broke Girls creator Michael Patrick King seems to have brought this attitude about Brooklyn over from his previous gig on Sex and the City.

Dennings gets most of the best jokes as Max, but sometimes her delivery is a bit flat. More importantly, she often risks coming off as unlikable as her character. Thankfully, the show allowed her to show cracks in Max’s armor and play up the fact that her brusque attitude is the result of having lived a rough life. Behrs also has a tricky job in a role that could’ve easily been a one-dimensional ditz. Caroline is still spoiled, but the character is also allowed to be smart and resourceful. Thanks to Caroline’s sunny disposition, Behrs is endearing enough for the two of them. Max and Caroline end up complementing each other and making a nice team.

Stand out episodes include Ep. 3/“And the Strokes of Goodwill” (Caroline is introduced to shopping at the Goodwill), Ep. 5/“And the Hoarder Culture” (Max makes a big move for love interest Johnny; actor Nick Zano looks like a hipster Josh Brolin), Ep. 11/“And the Reality Check” (Max gets emotional over parting with Caroline’s horse, Chestnut — did I mention the girls have a horse? — and Caroline “gets her rich on.”) Ep. 12/ “And the Pop-Up Sale” (Caroline proves she’s in it with Max for the long haul, and not just till she’s back on her feet.) Ep. 18/ “And the One-Night Stands” (best use of the ensemble), and the hour-long season finale which featured guest star Martha Stewart and hinted that Steven Webber (Wings) will be playing Caroline’s father sometime down the line.

2 Broke Girls – The Complete First Season is presented in an aspect ratio of 1.78:1. The 1080p image is arrived at with an AVC MPEG-4 codec at an average of 17 mbps. The show is very obviously almost completely filmed on a soundstage, and the Blu-ray is not asked to do a lot of heavy lifting. So despite the fact that all 24 season 1 episodes are crammed onto just two discs, there really aren’t any artifacting issues. The image is sharp and detailed — all of the tchotchkes in Max’s apartment come through nicely. The colors trend less toward popping and lean more toward being warm. The video transfer offers pleasing flesh tones (there’s a clear difference between Behrs and the paler Dennings) and does solid job on conveying the girls’ ever-present mustard-and-red diner uniforms. From a visual standpoint, it wasn’t essential for this show to come out on Blu-ray, but I’m glad it did.

The DTS-HD Master Audio 5.1 track delivers the dialogue clearly and effectively from the center speakers, which is the most important thing on this kind of show. The musical cues between each scene (featuring the show’s theme song, “Second Chance” by Peter Bjorn and John) were a little too punchy coming out of the rear speakers for my taste, but they never interfered with the dialogue. I wish the track had surrounded me more with ambient noise from the show’s city setting. However, as I mentioned before, the show is very clearly filmed on a stage so I never had the illusion this was taking place in a city. The laughter from the “live studio audience” is balanced and surprisingly varied, refusing to give us the same generic laughing sound every single time. (Though the fact that I keep putting “live studio audience” in quotation marks should tell you I still think at least some of the laughter is canned.)

All of the bonus material — presented in HD — is on Disc 2. For some reason, Disc 1 gives you a “Special Features” option, even though you can’t actually watch them there.

“2 Girls Going 4 Broke”: (14:06) This behind-the scenes featurette includes the cast, as well as creators Michael Patrick King and Whitney Cummings (NBC’s Whitney) chatting about the show. King talks about writing for 2 Broke Girls after working on Sex and the City, where none of the characters worried about money. Cummings explains the multi-camera/live-audience format (which is also used for Whitney) by pointing out that she’s a stand-up comedian and is used to writing jokes and comedic beats for a live audience. Dennings and Behrs talk about developing an instant chemistry with each other. A little self-congratulatory, but pretty informative.

Unaired Scenes/Alternate Jokes: (6:14) Features five scenes. The best of the bunch feature Max flirting with Johnny, and Earl crashing the season finale party to deliver an important message to Caroline.

2 Broke Girls is interesting in that it looks and sounds like an old-fashioned sitcom, but that illusion is shattered by all the sex jokes. The one-liners are hit or miss — there are so many of them, at least a few are a bound to nudge your funny bone — and the supporting cast could definitely be improved. However, the show is at its best when it’s focusing on Max and Caroline. (Behrs, in particular, is a nice comedic find.)

I recommend you at least give this show a look to see if it’s your flavor. However, I can’t recommend you run out and buy this Blu-ray. Everything you need to know about this show is in its title, so you’ll do just as well catching a random re-run or tuning in for season 2 this fall.

Sons of Anarchy: Season Four (Blu-ray) The Adventures of the Wilderness Family