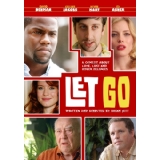 The movies have done a pretty good job of showing us the action, drama, horror, comedy and, yes, sex that lies behind prison walls. But there are far fewer examples of films examining what happens once an inmate is paroled and tries to re-enter the “real world.” The most famous movie parolee is probably Brooks from The Shawshank Redemption, and that didn’t turn out so well.

As the film opens, we are introduced separately to ex-convicts Darla (Gillian Jacobs), Artie (Ed Asner) and Kris (Kevin Hart). The thread that loosely ties their stories together is Walter Dishman (David Denman), their melancholy parole officer who can’t quite figure out why he’s melancholy. (His wife, played by Maria Thayer, seems lovely, but they have a dull domestic life.) Despite his own malaise, Walter shows genuine concern for each of his clients and is eventually tempted to have an affair with one of them. (SPOILER ALERT: It’s not Ed Asner.)

The biggest problem with the film is that Walter is simply not a strong enough character to hold the movie — and the various storylines — together. Denman is likable enough and nicely underplays the role, but, by the end of the movie, we don’t have a better sense of why Walter was depressed than we did in the beginning. Fortunately, the movie is more of an ensemble piece and doesn’t totally rest on Denman’s broad shoulders.

Let Go very conveniently gives us a trio of non-violent criminals we can feel fine rooting for. (The closest thing to a violent crook is Artie, a serial bank robber.)

I was particularly pleased to see Hart dial down his “I just downed 15 Red Bulls” antics to play a disgraced doctor struggling to perform menial jobs and facing one humiliation after another. Though Hart’s fast-talking persona has made him incredibly successful — Think Like a Man, hosting the VMAs, his various stand-up comedy specials — it can be grating over a prolonged period of time. I’m not saying this movie is going to earn him an Oscar, but it’s an encouraging sign that he can do subtle work as an actor.

Meanwhile, Asner once again rolls out the grumpy old man routine he perfected before I was even born. What makes his performance as Artie stands out is the way he and the script — written by first-time director Brian Jett — convey the old man’s intense loneliness, which is what fuels his bitterness. Don’t get me wrong: there’s also solid comedy to be found here, including a scene where Artie tries to buy a gun at a pawn shop. I also enjoyed the part where someone hands cranky Artie a balloon, which I’m convinced was a nod to Up.

Darla’s storyline was the biggest disappointment, which is a shame because I’m a big fan of Jacobs and her work on Community. Darla specializes in selling stolen goods, including an engagement ring from a psycho she suckered. (Simon Helberg of The Big Bang Theory plays Darla’s spurned lover Frank, but his creepy/nerdy performance doesn’t quite mesh with the rest of the movie.) Darla decides to use her feminine wiles to trick Walter into allowing her to leave town, so she can get away from Frank. The more time she spends with kindhearted Walter, the more complicated things get. Jacobs is good, but I wish Jett had a bit more confidence in his storytelling capabilities (there’s a scene where another character flatly points out that Darla can’t love anyone) instead of clumsily telegraphing things.

The film seems to want to make some sly points about the parole system — especially in the storyline involving Hart’s character and the kind of work that is offered to ex-cons — but rarely hangs around long enough to fully develop some of its more interesting ideas. For that reason — and probably because the cast is filled with TV actors — I actually think this story would work better as a TV show.

In the end, Let Go is an unnecessarily quirky dramedy that isn’t nearly good enough to be considered the definitive life-after-prison movie. However, I do give it credit for exploring a subject that hasn’t been done to death on screen.