Posted in: Disc Reviews by Michael Durr on September 27th, 2012 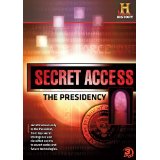 The presidential election is right around the corner. We have two candidates where either one could realistically win. We just hope that there is no funny business and that all of the voting is on the up and up. Regardless, the History Channel has produced many specials over the years that deal with different facets of the presidency. Let’s take a look at three of those specials in this 3-disc set.

Air Force One (44:51): This hour long (with commercials) specials focuses on the most famous plane in the United States, Air Force One. The first thing we learn is that Air Force can be any plane the president flies (it is a call signal). However, the plane most associated with Air Force One is a Boeing VC-25. A very heavily modified Boeing VC-25. But there is a lot more to Air Force One than just a big fancy plane with special cargo inside.

This documentary deals specifically with former president George W. Bush and his trip to Africa to raise awareness about Malaria. The amount of preparation and detail work involved is immense before the plane ever takes off the ground. Every spot is polished, every corner is inspected. Once the plane is off the ground, we get a look inside the spacious rooms and how it provides all the comforts of home and then some. But once they land, it is even more difficult to make sure that they make it home.

The White House Behind Closed Doors (1:07:02): This is another special with George W. Bush. This time he brings along his lovely wife, Laura Bush as we get a unique look inside the most famous in the United States, the White House. Leigh and Leslie Keno from Antiques Roadshow are our hosts as they sit with Laura Bush and go over many of the room that we have come to appreciate such as the Oval Office. But in addition to a tour with the former first lady, there is much history here to explore.

Did you know that every president except one has lived in the White House? (George Washington). However, one president has had more influence than any other president that has ever lived there (also George Washington). Each president has brought their own touches to the White House to accommodate taste and at the same time need. An example is Franklin D. Roosevelt who desired to hide his paraplegia from the public but at the same time, wheelchair accessible alterations had to be made to accommodate his condition.

The President’s Book of Secrets(1:29:01): Our last special is History Channel’s attempt at tawdry tales that might be in a special book of secrets if the White House even had such a book. This is done when President Obama was a president-elect and about to enter the White House for the very first time. Sealed in an envelope left by the former president, George W. Bush is a letter to the new president. But what does it contain? Could it be secrets that would shake the very foundation of the United States, or does it just include a recipe from Laura for roast duck?

Of course, the best example of learning a deadly secret upon entering the White House for the first time would probably be Harry Truman. When he entered, he learned that we had the atomic bomb and intended to use it when the time was right. But there are other secrets that only the most powerful men in the world and their most trusted advisors are privy to. If they were written down in a book, what would they be? Could they be medical secrets, economic tidbits or Bill Clinton’s tips to pick up the ladies? (Sorry I can not help myself).

These three specials were mildly entertaining. The White House behind closed doors was probably the best of the three as it was not too short and provided plenty of useful information along the way except for the silly parts with the guys from the Antiques Roadshow. Air Force One was also pretty good since they went into so much detail about the preparations they go into before the sucker even gets up into the air. It was also a treat to see how spacious the aircraft is and how much pride people have in taking care of the president’s ride into the skies.

However, there are two huge problems here. The first is that they leave out a whole bunch of information due to government secrets. Now I get the fact that you can not give up some of these closely guarded secrets. But when every other phrase is “but we can’t go into that” or “I can’t tell you that”, it gets very tedious. The other issue is with the entire Book of Secrets program. It really only has limited information stretched into an hour and a half program (2 hours for tv time).

The rest of the time is like a bad soap opera. What could be in the Presidential Book of Secrets? Who the heck knows, but this program will not get us any closer to finding that out. Perhaps it could be Jimmy Carter’s “How to grow a peanut farm in three easy steps” or Abraham Lincoln’s “How to kill a vampire in three easy steps.” The program does absolutely nothing to answer itself.

The video is in 1.78:1 widescreen presentation. Amazingly, this is actually in Widescreen thanks to the fact that the History Channel for the last few years has made the switch to HD. The color and flesh tones look reasonably accurate and while it is far from the high definition we are used to in today’s environment, we can feel good that we are watching a quality presentation. Of course, when we sit here salivating over Air Force One or the one of the many offices in the White House, we are not exactly looking for little specs of dirt in the video.

For the audio portion, we get a 2.0 English Dolby Digital Stereo. The audio is fairly simple and comes down to two things, dialog (or voiceovers) and your occasional mood music. Dialog is good and clear but nothing too special. Occasional mood music (like the ones you would find in Book of Secrets) are mostly standard fare and are not going to leave you on the edge of your seat (However, Taft’s weight loss shakes or light beer brewing advice might at least raise an eyebrow, okay I’ll stop now…maybe) No subtitles could be found.

Regardless of whether President Obama gets re-elected for a second term or Romney pulls it out for the Republicans, we will shortly have one of these men for the next four years in the highest office in these United States. These three specials (or at least two of them) show us some interesting information from Air Force One to the inside of the White House. It’s not groundbreaking or anything but at the right price, this set could be worth a couple of nights of entertainment.

The discs are very standard fare. Video, average, audio, average, extras non-existent. They could have opted to put this one two discs (combining the first two programs) but decided not to and go for three discs. It almost feels like they maybe had a couple more programs but decided to pull them at the last second. Maybe they decided that the 2 programs dedicated to the Bush Twins was a little too hot for television (if you know what I mean *wink* *wink*). Anyway, I give this one a slight recommendation, its entertaining, as a low budget piece or rental. Long live the president, whoever he may be.

Michael Durr has been reviewing movies for the better part of fifteen years now. He primarily enjoys thrillers, sci-fi, animation and even a little courtroom drama. His favorite films include Escape from New York, the Goonies and anything with Alyssa Milano. When he’s not praising Kurt Russell as the greatest actor of our time or scratching his head over a David Lynch flick, he’s spending time at home in Texas with his lovely wife, Lori and his amazing son. How they put up with him is a mystery, but even Basil Rathbone doesn’t have the time to solve that one.
Terra Nova Battlefield America