Posted in: No Huddle by Gino Sassani on October 3rd, 2012 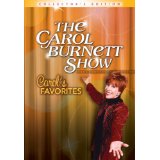 It’s hard to believe that CBS didn’t want The Carol Burnett Show. Not only didn’t they want it, but they fought hard to keep it from ever happening. It was the result of a 5-year contract the actress had with the network. She had been a popular member of The Gary Moore Show, and they wanted to hold on to her services. So they made her an offer she just couldn’t refuse. They gave her a not-so-standard 5-year contract that gave her the right to activate a special clause at any time in the five years. The clause gave her the right to produce her own variety show, and the network would be obligated to air at least 31 episodes of the show. Carol activated the clause with just one week remaining to do so.

So what made The Carol Burnett Show such an outstanding hit? You have to start with Carol herself, of course. She’d been doing this kind of show for years and was paying attention to what worked and what didn’t. She knew it started with the writing staff, and she hired only the best and the brightest. When it was time to put together a cast, she knew the first thing she wanted was a “Harvey Korman type”. She did better than that. She got Harvey Korman. She knew you had to have a lady’s man in the cast, and she got that element with Lyle Waggoner. He was relatively unknown at the time, but she knew how to spot talent. Then there was the need for another female lead. She wanted someone who looked a little like her to play her sister is an ongoing sketch she had planned. That’s when she remembered young 17-year-old Vicki Lawrence, who had written a fan letter to her a year earlier. Lawrence had invited her to attend a talent competition in her small town, and Carol decided to go. She was impressed enough by what she saw that she remembered the girl later when casting her show. The resemblance was quite remarkable. The last cast member didn’t even really become an actual regular cast member for the first eight years. That doesn’t matter, because who can imagine The Carol Burnett Show without the loveable Tim Conway? He would become such a great partner to Korman that the two continued to perform and tour together up until Korman’s death in 2008.

Carol herself was not only quite funny, but she was famously generous. It wasn’t important to her to feed her own ego. She was well known for feeding her fellow cast mates and guests the best material. She knew how to get out of the way and was perfectly happy letting someone else shine. It meant the cast was always very comfortable together, and it showed in the performances. There was almost no turnover in personnel, and the unit functioned very much as a repertoire company and family. It’s obvious that even today they enjoy each other’s company and have only the fondest memories of each other.

The show itself was your typical variety show, and it was pretty much the last of its kind. The episodes feature wonderful song and dance numbers. There were favorite characters and sketches that would become fan favorites and classics today. One of the sketches stared Lawrence as an old crotchety lady with her son and daughter-in-law. That sketch proved so popular that it went on as its own show for five years. You know it. That was Mama’s Family. Only Lawrence returned to the series in her role of Mama. It was enough, because she was the heart and soul of the character. The show also featured Carol’s question-and-answer period with the live audience. It was not a scripted or rehearsed segment. She swears there was never an audience plant, nor did she have any idea what someone would say when she called on them. She was quick on her feet, and this became one of the most popular segments of the show.

In the 1990’s there was an attempt to bring the show back. But the day of the variety show had come and gone. None of her original cast members were a part of the revival except in a guest capacity. It lasted less than a year. It would seem that you just couldn’t go back. That is until this very impressive release of the series by Time-Life. There is a huge collection of the show’s run on 22 discs with 50 episodes also available. Unfortunately, we were only provided with the 6-disc collection called Carol’s Favorites. Here you get 17 uncut episodes and a large number of extras that include plenty of interview material with the cast, a look back, a documentary on the show, and several rare classic sketches.

Guests on the 6-disc set include such fan favorites as Roddy McDowall, Dinah Shore, Steve Martin, Betty White, The Jackson 5, Shirley MacLaine, Carl Reiner, Joanne Woodward, Joan Rivers, Vincent Price, Pearl Bailey, Ken Berry, Rock Hudson, Nancy Walker, Jim Nabors, Jean Stapleton and Phil Silvers. The video quality is the best that can be expected from a taped variety show from the 1960’s and 1970’s. This wasn’t the age of high-definition television. The biggest problem with the set is that it will leave you wanting more. But then again, “that’s show biz”.

Gino Sassani is a member of the Southeastern Film Critic's Association (SEFCA). He is a film and television critic based in Tampa, Florida. He's also the Senior Editor here at Upcomingdiscs. Gino started reviewing films in the early 1990's as a segment of his local television show Focus. He's an award-winning recording artist for Omega Records. Gino is currently working on his 8th album Merchants & Mercenaries. Gino took over Upcomingdiscs Dec 1, 2008. He works out of a home theater he calls The Reel World. Favorite films: The Godfather, The Godfather Part II, The Body Snatcher (Val Lewton film with Karloff and Lugosi, not the pod people film), Unforgiven, Gladiator, The Lion King, Jaws, Son Of Frankenstein, The Good, The Bad And The Ugly, and Monsters, Inc.
Adventure Time 3: Jake vs Me-Mow Desperate Housewives: The Complete Eighth and Final Season