Posted in: Disc Reviews by Michael Durr on October 3rd, 2012 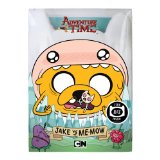 The residential cartoon aficionado is reporting for duty. I often think when I am 80 or 90 years old (if I live that long), I will be in my easy chair with a glass of Metamucil and my cane off to the side while I enjoy a heaping dose of cartoons. Then I will go yell at some kids and tell them to get off my lawn. That is the life, I am telling you. Today, I will be reviewing the third best of Adventure Time dvd with the always lovable Jake and Finn.

Adventure Time has not been reviewed here on the site before, so here is a quick synopsis. Adventure Time involves two main characters named Finn a human, and Jake a dog. The two have frequent adventures where they must go through dungeons, save princesses, and defeat evil monsters. Their adventures often border on outlandish and lots of craziness but it can be agreed that these two will always have a fun time doing it. Let us take a look at some of the assorted episodes from this disc.

Jake vs Me-Mow: Wildberry Princess has cooked up some meat pies for Finn and Jake. Just then, she receives an urgent summons that the Guild of Assassins is trying to kill her. As Finn and Wildberry discuss strategy outside, Jake continues to eat his meat pie. He soon uncovers a cat in the meat pie named Me-Mow who is part of the Guild of Assassins. The cat tries to kill Jake and soon threatens him with poison unless Jake carries out the assassination of the Princess.

Belly of the Beast: Something is shaking at the Finn and Jake house and it appears that a dream monster is on the loose. So of course, Finn and Jake go out to have fun with it. But this is not a dream, it is actually very real. They fight with the monster until they hear that someone is inside the monster. The two decide to ride the next tree into the mouth of the beast. Soon, they come upon a pack of bears led by a bear named Party Pat. Finn, concerned that the bears are just going to end up as stomach stuff tries to get them to leave. But they just want to party.

Mortal Folly: Jake, Finn and Princess Bubblegum are meditating. They each dream up on different things until we get to the Princess who stumbles upon the nightmare. She urges them both to follow her to a very special tree when an ancient evil is concealed in amber. She gives them special helmets that will silence the hypnotic chanting that will compel them to break the evil Lich free. However, a nearby snail is clearly not wearing a helmet and breaks the Lich free. Princess gives Finn the Gauntlet of the Hero (or Billy’s Beef Fingers) and a pink sweater to keep him warm. Finn goes off to defeat the Lich before he returns to full strength.

Dad’s Dungeon: Finn, Jake and BMO (Beemo, a talking computer with human like qualities) are spending time together. They find a cartridge player with a slot and a disc. They quickly insert the disc and it is a pre-recorded message from Finn and Jake’s dad. It appears that one point he made them a dungeon. The intent was to toughen up Finn and make him not such a whiney baby. However, Finn is plenty tough and has not whined since he was a baby. The reward for completing the dungeon is a family sword, made of demon’s blood. But standing in the way will be several trials that will test their might and intelligence.

After quite a few episodes, I am still struggling to figure out whether I like Adventure Time or not. Clearly it is not meant for my age group because I could easily see if I was much much younger (like grade school), that I would enjoy it. Finn and Jake are likeable characters and the strong sense of “Adventure”, pardon the pun is actually quite enjoyable. Their romps are often what I would envision a role playing game turned cartoon to be if they were catering to very young children.

But on the other hand, it is a very silly cartoon. Plot points are rudimentary, and often it seems like they find a solution to beating a monster or escaping a puzzle by pulling something out of their proverbial you know where regardless of whether it makes sense. I know, I know it’s made for kids, but adults will watch this too and we can only forgive so much. Also, the annoying music makes me want to hit mute about as quick as possible.

The video is in 1.78:1 widescreen presentation. The style of Adventure Time is very colorful but also very rudimentary. It is not bad to look at all, just do not expect any fine lines of definition. Monsters are blocky, people and animals usually fair much better however. This presentation should keep kids quite interested and I have to admit the variety of characters are numerous and I have a good time of poking fun at them.

For the audio portion, we get a Dolby Digital Stereo track available in English. The sound is quite loud and every word is perfectly audible. Sure, some of these characters have silly voices but I never felt I was straining to pick out phrases and words. Occasional background effects and cutesy songs fill the stereo speakers but this is your basic track executed properly. English SDH subtitles are provided.

You might want to grab your friends and go to distant lands in hope that the fun will never end when you watch Adventure Time, but lets face facts this series will probably only appeal to certain people. I do think that parents looking for a more modern cartoon might appreciate showing this to their children. However, just a note it is a tad violent. Nothing horrible, but some of the monsters would be on the scary side for a really young one (less than 8 years).

The disc is nothing too awesome, it has decent video, decent audio and its best extra is actually next to it in the box. I would have liked to see maybe a couple of commentaries and perhaps an interview or two. Of course, the fans of the show really just want to see complete season sets and to date only season one has been issued. My recommendation would be based solely if you are looking for a cute hat for a smallish head and want some episodes to boot, then grab it. It is not a bad show but then again it does not exactly transcend its age group.

Episodes
Jake vs Me Mow
The Jiggler
What is Life?
His Hero
Susan Strong
Belly of the Beast
Videomakers
Mortal Folly
Mortal Recoil
Too Young
Five Short Graybles
Thank You
Ocean of Fear
Goliad
Dad’s Dungeon
Another Way

Michael Durr has been reviewing movies for the better part of fifteen years now. He primarily enjoys thrillers, sci-fi, animation and even a little courtroom drama. His favorite films include Escape from New York, the Goonies and anything with Alyssa Milano. When he’s not praising Kurt Russell as the greatest actor of our time or scratching his head over a David Lynch flick, he’s spending time at home in Texas with his lovely wife, Lori and his amazing son. How they put up with him is a mystery, but even Basil Rathbone doesn’t have the time to solve that one.
“31 Nights of Terror” Dora the Explorer – Halloween Parade The Carol Burnett Show: Carol’s Favorites