Posted in: Disc Reviews by Gino Sassani on October 3rd, 2012 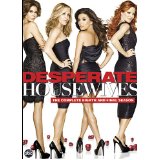 “It’s funny. Some people never get to know the folks next door. They share a fence and nothing else. And we’ve shared everything. How did we get to be so lucky?”

Fans of Desperate Housewives have considered themselves lucky to have shared many a night with their television neighbors on Wisteria Lane. But like all good things, the ride has come to an end, and it’s time to take up residence somewhere else.

The plot is pretty much standard soap-opera fare. There are love triangles, diseases, and the typical complications you can find on any given weekday during the networks’ afternoon programs. Of course, here we have prime-time production values and a decidedly A cast of actors. It’s very likely that Desperate Housewives might have actually benefited from the writers’ strike, which reduced the run of episodes down to 17. The writers spent more time dealing with the characters and less trying to pretend they were creating compelling drama. Where the show works is in these quirky, almost black-comedy moments between the characters. Since there is no “story” to really speak of, I guess it’s more important that you meet the residents of Wisteria Lane. Susan (Hatcher) is married to Mike (Denton). She’s kind of an airhead and is the housewife most likely to be on the outside of a joke or reference. Susan and Mike are raising their son MJ. Lynette (Huffman) was once a big-time corporate executive who is now raising five kids and is married to Tom (Savant) who also left corporate America and ran a pizza shop into the ground. Now he’s back in the corporate game. Bree (Cross) was married to Orson (MacLachlan), who has had more than one ex-wife turn up dead. Unfortunately for Orson, it is the husbands who are expendable in this show. And now he’s out of the picture. Last but certainly not least is Gabrielle (Parker). She’s obviously the best-looking of the group and acts like she knows it. Her husband is Carlos (Chavira), a wealthy and successful businessman. She has expensive tastes and wants to be pampered. Together these ladies go through guys and catfights like they were pitches at the All Star Game. Vanessa Williams is Renee. She’s an old college friend of Lynette’s who married a big-time baseball player and has been living the high life. But that’s all about to come to an end. She’s gets divorced and moves into the hood. That could spell trouble, because she once spent a secret romantic weekend with Tom and isn’t over him yet. The hood also grows by another rather unexpected resident. Gone is Katherine without even a mention.

The show had the huge advantage of knowing this was the last season from the beginning. That means that fans will get a lot of closure and not be left hanging. Okay, I made that last part up. It seems they do find a way to leave you hanging on a new mystery after the last episode has run its course. Yes, we do get to see what happens to the families in the years to come, but the show almost sets itself up for a spinoff of new residents on the Lane. So far, there doesn’t appear to be any serious talk that something like that is actually in the works, but who knows.

Each episode of Desperate Housewives is presented in a sweet 1.78:1 aspect ratio. Again, I can’t compare to broadcast versions of the series, but these DVD transfers are quite nice. They look identical to previous releases. The sharpness is excellent. Black levels are well above average for television, even in the HD age. Colors aren’t necessarily bright at all, but remain constant and solid throughout. Flesh tones are dead-on reference. These women often dress flashy, and the transfer does its job to make them look good.

The Dolby Digital 5.1 track is more aggressive than I expected going in. There are not a lot of dynamic opportunities for an audio track to particularly shine here, but it does a wonderful job of immersing the viewer in the show. The plentiful musical numbers are well-placed, usually not interfering with the action. Dialog is always easy to hear, and placement is spot-on. Not much for the subs here, but who cares?

Desperate For Trivia: (4:37) Play Desperate Housewives trivia with the cast.

Growing Up On Wisteria Lane: (9:55) The child actors gather to share their memories of growing up working on the show.

Deleted Scenes: I’m not sure any of these added anything. They are mostly extra character moments and pretty much more of the same.

Of course, if you’re a fan of the show this one is a no-brainer. You’re going to complete your set and say goodbye to the girls in style. Not a bad run when you consider that the show’s creator was out of work and hadn’t really had a career in television. I’m sure he’s not beating himself up over the show’s end. He’s counting his blessings…. and his money. It’s been almost a decade and you’ve gotten a little bit of a guilty pleasure watching these girls “doing what they loved best”.

Gino Sassani is a member of the Southeastern Film Critic's Association (SEFCA). He is a film and television critic based in Tampa, Florida. He's also the Senior Editor here at Upcomingdiscs. Gino started reviewing films in the early 1990's as a segment of his local television show Focus. He's an award-winning recording artist for Omega Records. Gino is currently working on his 8th album Merchants & Mercenaries. Gino took over Upcomingdiscs Dec 1, 2008. He works out of a home theater he calls The Reel World. Favorite films: The Godfather, The Godfather Part II, The Body Snatcher (Val Lewton film with Karloff and Lugosi, not the pod people film), Unforgiven, Gladiator, The Lion King, Jaws, Son Of Frankenstein, The Good, The Bad And The Ugly, and Monsters, Inc.
The Carol Burnett Show: Carol’s Favorites “31 Nights Of Terror” The Hole