“31 Nights Of Terror” The Hole

Posted in: No Huddle by Brent Lorentson on October 4th, 2012 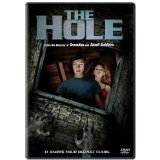 It took some time, but alas, Joe Dante’s movie The Hole is finally available for us all to see.  The impact Dante’s films had on my childhood is something I am thankful for.  I can’t imagine surviving the Christmas holiday without watching Gremlins.  I’ll still never be able to look at a tilt-a-whirl without imagining it being a spaceship because of Explorers.  Then there are the fond memories I have with Matinee, The ‘Burbs, Small Soldiers and few others.  Basically I hold Dante with high esteem and believe he’s one of our best working genre directors from whom I wish we were seeing more.

When I did get the title to review, I was a bit hesitant with this one.  Part of me wanted to hurry home and slide this into my player, while another part of me was cautious not to get my hopes up for this one.  Waiting was the best thing I could have done for this film, so as my stack got thinner I knew the time had come to give this movie a gander.

When we first meet the Thompson family they are arriving at their new home after a rushed move from Brooklyn to the quaint town of Bensonville.  Thankfully for the older son Dane (Chris Massoglia) there is a cute neighbor, Julie (Haley Bennett) for him to keep an eye on from his bedroom window.  Dane of course hates that he’s had to move and leave all his friends behind but his younger brother Lucas (Nathan Gamble) seems to be taking it in stride.  This is all stuff we’ve seen before, and already the movie had started to lose my interest, but it was just at this moment the kids discover the locked hatch, and I got reeled back in.

There is nothing fancy about the hatch cover, but the sight of all the locks made it rather ominous, which translates to the inevitability of the kids having to open the hatch.  Like you’d expect, once the hatch is opened unpleasantness soon follows.  The reveal of the seemingly bottomless pit that is the hole in question becomes a clever plot device that seems to never reach its full potential.  We never discover what exactly the hole is, but what it can do is conjure up your worst fears, and that is what will emerge to haunt you.

To hopefully get some answers about the hole, the trio search for the former owner of the home who is said to have gone crazy while living in the home.  The character is affectionately known throughout the town as Creepy Carl (Bruce Dern).  I wish there was more of Carl and more about what brought him to the brink of madness.  But this would develop to become a common theme I found while watching this; it kept making want more and just never delivered on what could have been a thing of greatness.  All the elements are there; it just never comes together.

But then I thought about this film a little differently.  What if I was a kid and this was the first time I had ever seen a scary movie?  Suddenly the movie took on a whole new light.  This is the movie to help coax those younger viewers of film and introduce them to horror, to enjoy the things that go bump in the night before they delve into the gore-drenched cinema that awaits.  With this new theory on the film, I think this could be a brilliant move on the part of all those involved.

With a story delving into the idea of kids facing their fears, it easily becomes accessible to each and every viewer.  Lucas being the youngest and afraid of clowns is relatable to some degree, but it’s the fears that Julie and Dane have to contend with that ground this in reality to a certain degree.  Fear of the unknown is a common theme we see time and time again, but it’s the fear of the known, the inescapable, that can actually be more terrifying.

The other problem I had was with the look of the film.  Some of this has to do with the fact it was shot to be seen in 3D, but still the whole film seemed to be over lit for some reason.  Too much light did remove a lot of the opportunities for suspense, and it just gave it an unappealing made-for-TV look.  I’d like to check this out again but view it in 3D and see if this makes any difference.

Though this didn’t deliver as much as I hoped, it still was fun seeing Dick Miller make an appearance; it was something I hope fans will appreciate.  If you’re going into this expecting the next Gremlins, then you’re going find yourself disappointed, but those of you with young kids that want to introduce them into horror in a smooth and non-terrifying way this is the perfect gateway film for them.

Brent Lorentson is a horror writer and film critic based out of Tampa, Florida. With a BA in Digital Film, he co-wrote and co-directed Scavenger Hunt. His short stories have appeared in various horror anthologies. In 2019 his short script Fertile Blood will be a part of the anthology horror film Slumber Party. He is currently working on his first novel A Dark and Secret Place set to be released in late 2019. Favorite Films: Taxi Driver, Fight Club, I Saw the Devil, The Wild Bunch, Dawn of the Dead, A Clockwork Orange, Pulp Fiction, Heathers, The Monster Squad, and High Fidelity.
Desperate Housewives: The Complete Eighth and Final Season Family Guy, Volume Ten