Posted in: No Huddle by Brent Lorentson on October 4th, 2012 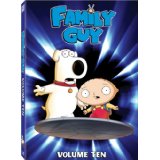 I don’t believe anyone could have predicted not only Family Guy being on the air for over a decade but how big a power player Seth MacFarlane (creator of Family Guy and American Dad) would become.  With several shows currently in production, the release of his first live action feature Ted earlier this summer, and now the recently announced hosting of the upcoming Oscars, I believe it’s safe to say MacFarlane is about as big a name as Oprah.  And to think he didn’t have to give his fans cars to do it; he’s just that talented.

What MacFarlane has done with the Griffin family is something of a miracle.  In so many ways these are some of the rudest, crude, obnoxious characters ever put to the small screen, but we can’t help ourselves but love them.  Every week the line of moral decency is pushed to the edge and crossed, but it’s all in good fun, because we the viewer can tell ourselves it is OK because they’re animated.

With the release of volume 10 we are given a collection of 14 uncensored episodes, and it’s hard to believe that MacFarlane and his staff of writers continue to bring us fresh stories filled with clever homages, elaborate musical numbers, and most importantly things that still make us laugh.

That being said, Volume 10 is a bit of a mixed bag.  My favorite episode in the set just happens to be episode one on disc one.  Halloween on Spooner Street, the episode where Stewie discovers trick or treating for the first time and seeks revenge on the gang of kids who steal his candy. This one was easily the strongest and got the most laughs out of me, but it simply left the rest falling short in comparison.  The Christmas episode, Road to the North Pole, is one of the episodes my feelings were split the most on.  Everything leading to Stewie and Brian’s arrival to meeting Santa is good, but this episode just went on for too long when the only payoff came with seeing Brian and Stewie taking over for Santa and things simply going horribly wrong.

There isn’t an episode that I can say I didn’t like or get at least a few laughs out of; the middle of the set felt a bit dry, but each managed to still have at least a few good if not great standout moments.  The musical number in Friends of Peter G. is great, and the German Guy episode and the fight scene between jealous Mr. Herbert vs. a Nazi over Chris were epic to say the least.

The most clever of the episodes for me was The Big Bang Theory where we see Stewie and Brian going back to the time of Da Vinci to stop Bertram from changing past events in history.  A lot of fun is had here with Stewie and Brian playing with the laws of time travel, and the final (?) showdown between Stewie and Bertram is violent to say the least.

Being able to watch these without commercials and without the bleeps makes the viewing experience easy.  Once you hit that ‘play all” button, I hope you’re ready to be indulged for a few hours.  I had no complaints watching these, even if some I had seen a few times already.  This show is simply too much fun to turn off.  Thankfully it’s as good as it is, because it looks like it’s going to be in syndication for a long time to come.

Brent Lorentson is a horror writer and film critic based out of Tampa, Florida. With a BA in Digital Film, he co-wrote and co-directed Scavenger Hunt. His short stories have appeared in various horror anthologies. In 2019 his short script Fertile Blood will be a part of the anthology horror film Slumber Party. He is currently working on his first novel A Dark and Secret Place set to be released in late 2019. Favorite Films: Taxi Driver, Fight Club, I Saw the Devil, The Wild Bunch, Dawn of the Dead, A Clockwork Orange, Pulp Fiction, Heathers, The Monster Squad, and High Fidelity.
“31 Nights Of Terror” The Hole “31 Nights Of Terror” Frankenweenie