Posted in: The Reel World by Gino Sassani on October 5th, 2012 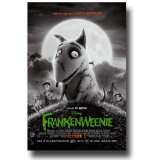 To his credit, Tim Burton has managed to keep the art of stop motion alive and well in Hollywood. He’s also proven that it can still be quite effective and just as commercial with such classics as A Nightmare Before Christmas. Since that time he’s had a modest number of hits and misses but nothing that has come close to the holiday staple…until now. Frankenweenie is destined to become a Halloween tradition at our house, and I suspect I’m not alone.

Of course, Frankenweenie isn’t exactly a brand new idea. In 1984 Burton created a short film on the idea. It made the usual festival circuits and has shown up a couple of times as an extra on his more recent films. The original short certainly had its limitations, but it was a rather sweet little nugget that fans have been quietly enjoying for nearly 20 years. It’s actually a bit of a surprise that it’s taken the filmmaker this long to revisit the idea, but this time with a budget and running time geared for the mass audiences. Whatever the reasons for the delay, it was well worth the wait, particularly after Burton’s very disappointing take on Dark Shadows. While Frankenweenie might not completely redeem that colossal disappointment, it has gone a long way toward making me believe the filmmaker still has the wit and genius that have marked some of his earlier films.

Young Victor Frankenstein (Tahan) is an odd boy. He doesn’t really have any friends except his faithful dog Sparky. He’s an aspiring horror filmmaker who has an inconvenient habit of “borrowing” anything in the house that might add some production values to his films. His life changes drastically when poor Sparky runs across the road chasing a ball one too many times. It’s curtains for Sparky, and it leaves Victor in an inconsolable funk.

Enter new science teacher Mr. Rzykruski (Landau) who offers some unconventional thoughts about life and death. He also challenges the students to reach high for the school’s science fair. It gives Victor the idea that perhaps he can bring Sparky back from the grave. The experiment is a success, but it gets complicated when sinister student Edgar E. Gore (Shaffer) discovers his secret and blackmails him into revealing the process. Before you know it all of the town’s kids are bringing dead animals back to life with disastrous results.

The first think you should know about Frankenweenie is that it is shot entirely in black & white. It’s a brave choice, particularly for what many look upon as a kids movie. It’s amazing how quickly you forget the monochrome presentation. It’s entirely appropriate and helps to make many of the homage moments really work. The second thing you should know is that it’s not a kids’ movie. Yes, there were plenty of children in the audience, and one expects animated films to be targeted at a younger audience, but this is no more aimed at kids than Nightmare Before Christmas was. The kids laughed and genuinely enjoyed the exotic characters and situations. But you can be sure that that audience had a good time without actually getting the movie. Fans of classic horror from the Universal days are who this film is truly intended for. Tim Burton has delivered what is essentially a love letter to those Universal films that started it all for many of us.

It’s all there. There are enough references both subtle and overt to make you drunk out of your mind should you decide to turn it into a drinking game. Of course, that’s not going to be easy at the cinema with 5-year-old Cindy Lou Who looking at you the whole time. Save that for the eventual home video release. And you will want to own it. This one will play annually in your home for decades to come. It would be a horrible injustice to point them out for you here. Suffice it to say that you’ll be digging deep into your own Universal horror experiences throughout the film leading up to a wonderfully rendered windmill scene that will bring the original Frankenstein front and center in your heart. It’s not just Universal that gets the love. You’ll find plenty of Hammer references, and Dr. R. looks eerily like a caricature of Vincent Price. Even the Japanese monster movies get some attention. Gamera fans will be particularly pleased.

The characters are classic Tim Burton. They have the exaggerated body shapes and stick legs that dominate his stop motion style. You won’t find the crazy architectural designs here. The film draws heavily on the Suburban 50’s look for that. There are wonderfully exotic characters. There’s young Elsa Van Helsing (Ryder) who has a deadpan cat that predicts dramatic moments in your life by dreaming about you. How do you know she’s dreaming about someone? She poops in the shape of their first initial. The Mayor or Burgermeister (Short) looks like a character from the Rankin and Bass Christmas specials. Then there are the marvelous creatures brought to life when the experiments go viral.

There’s also a pretty good voice cast here that includes Martin Short, Martin Landau, and Winona Ryder. The film is loaded with plenty of heart and humor. Every frame appears lovingly prepared by a man who has the same fondness for these films that you do. Burton manages to make one of the most charming films in decades. It was a risk. We’re talking black & white, stop motion, and 80-year-old film references. It’s very risky indeed. But, you know what? “It worked. It really worked.”

Gino Sassani is a member of the Southeastern Film Critic's Association (SEFCA). He is a film and television critic based in Tampa, Florida. He's also the Senior Editor here at Upcomingdiscs. Gino started reviewing films in the early 1990's as a segment of his local television show Focus. He's an award-winning recording artist for Omega Records. Gino is currently working on his 8th album Merchants & Mercenaries. Gino took over Upcomingdiscs Dec 1, 2008. He works out of a home theater he calls The Reel World. Favorite films: The Godfather, The Godfather Part II, The Body Snatcher (Val Lewton film with Karloff and Lugosi, not the pod people film), Unforgiven, Gladiator, The Lion King, Jaws, Son Of Frankenstein, The Good, The Bad And The Ugly, and Monsters, Inc.
Family Guy, Volume Ten Hart of Dixie – The Complete First Season