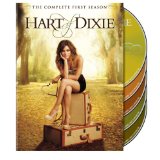 “All the food here is fried. The whole town smells like mold. But they could use a good doctor; one who cares about her patients.”

And that’s how a cynical New York doctor courageously puts aside a few (mostly true) stereotypes about the South and decides to stick around fictional BlueBell, Alabama. I’m just grateful the people behind Hart of Dixie exercised some restraint and didn’t call their show Southern HOSPITALity.

Zoe Hart (Rachel Bilson) is an aspiring — wait for it — heart surgeon in New York City who is told her bedside manner stinks. (Gregory House just rolled his eyes and changed the channel.) A colleague suggests she become a general practitioner for a year. The bad news is there are apparently no GP positions available in all of NYC. The good news is a kind stranger named Harley Wilkes (Nicholas Pryor) had offered Zoe a job at his modest Alabama medical practice a few years earlier. Once Zoe arrives in BlueBell, she finds that Harley has died and left her his half of the practice.

Zoe processes this shocking news while dealing with BlueBell’s (literally) colorful local population, many of whom are wary of the new outsider. This includes Brick Breeland (Tim Matheson), the arrogant doctor who thought he’d have BlueBell all to himself once his partner Harley died, and his daughter Lemon (Jaime King), a high-strung Southern belle who is the polar opposite of Zoe.

Fortunately, Zoe also finds some allies. Lavon Hayes (Cress Williams) is BlueBell’s popular mayor and a former NFL star who invites Zoe to live in his plantation. Wade Kinsella (Wilson Bethel) is the local bad boy who also lives on the mayor’s plantation and frequently engages in love-hate shenanigans with Zoe. There’s also George Tucker (Scott Porter), the respectable lawyer and town golden boy who appears to be perfect for Zoe in every way. Well, except for the part where he’s engaged to Lemon.

Hart of Dixie is created by Leila Gerstein, executive produced by Josh Schwartz and Stephanie Savage, and seems to represent a departure for a trio who previously worked on the infinitely more glamorous Gossip Girl and The O.C. (bitch). Hart of Dixie transports that familiar gloss to Alabama — well, Wilmington N.C. for the pilot followed by an L.A. backlot — but couples it with more earnest warmth than either of those two previous series. Dr. Hart gradually and predictably starts to win over the locals, but they also teach her a little something about the virtues of small-town living.

To play Zoe Hart, the Hart of Dixie team enlisted the services of former O.C. star Bilson. The actress is convincing as someone who is snobbish and stuck-up (channeling her O.C. work as Summer Roberts), but is spectacularly unconvincing as a capable doctor. Fortunately, Hart of Dixie isn’t exactly a serious medical drama. The problem is, when Zoe struggles to acquire patients, we’re supposed to think it’s because they don’t trust the New Yorker. Instead, it’s because she appears to be totally incompetent. At least Bilson looks great in the trendy shorts Zoe is always wearing.

The rest of the cast, thankfully, is pretty solid. Lemon is the show’s main antagonist, but her “villainy” comes from a place of intense insecurity. King’s strong, heightened performance coupled with well-rounded writing result in a surprisingly affecting character. (Matheson also modulates his impressively jerky character so that he’s lashing out at Zoe while eventually trying to teach her something at the same time.) I also thoroughly enjoy how much Lavon enjoys being the mayor of BlueBell, and it seems like Williams is having a blast with his role as Zoe’s de facto big brother.

Bethel brings a nice, rascally charm to his “opposites attract” dynamic with Zoe, and manages to sneak in some soulfulness. Meanwhile, Porter has the much less fun task of playing the relentlessly decent George, who is probably a little boring, but I don’t really mind because I have a blind spot for anyone associated with Friday Night Lights. (The pop culture-friendly writing staff couldn’t help themselves when they had a character describe life in BlueBell by saying “It’s like ‘Friday Night Lights,’ but without all the depressing parts.”)

The show is light on guest stars — only Gary Cole makes an impression as Zoe’s estranged dad — instead focusing on the eccentric, recurring BlueBell characters who do things like celebrate a pirate Thanksgiving (“Planksgiving”) and give their pet reptiles names like “Burt Reynolds” or “Margaret Mitchell.” I particularly enjoy the three older ladies who pop up every once in a while to sit on a bench and gossip.

Not surprisingly, most of the show’s plots revolve around the main characters’ romantic entanglements. However, what appears to be the central love triangle between Zoe, George and Lemon quickly expands to include Wade and even Lavon, resulting in the rarely seen love pentagon. “Love pentagon” doesn’t sound nearly as sexy as “love triangle”, but the increased number of participants makes for slightly fresher storylines and plots to fill out the 22 episodes in this show’s first season.

Hart of Dixie – The Complete First Season is presented in its original aspect ratio of 1.78:1. I’m always disappointed when a show — particularly one that looks great in HD — isn’t released on Blu-ray. However, Hart of Dixie rises above some of the recent DVD presentations I’ve seen. Best of all are the pops of color (mostly courtesy of Lemon’s wardrobe) and the warm orange/yellow hue that accompanies most of the daytime scenes. The flesh tones are also quite good, black levels are ok and there’s a pleasing rim light effect that comes through in many scenes.

The Dolby Digital 5.1 Surround track is as dialogue-driven as you’d expect from a comedic drama. The words come loudly and clearly, but I would’ve liked to have heard a bit more immersion because of the show’s rural setting. (The storm in the season finale is a notable exception.) Instead most of the track is devoted to the countrified score and songs — with a dash of O.C./Gossip Girl-style indie rock — constantly pumping through the speakers. American Idol winner Scotty McCreery pops up to perform in one episode. Overall, the track offers a solid presentation that could’ve been better.

Straight from the Hart of Dixie: (18:44) Creator Leila Gerstein talks about how she wanted to write about a happy place, and that happy place turned out to be BlueBell, Alabama (an admittedly idealized vision of the South). She also reveals the main character was originally a lawyer. The actors talk about the similarities and slight differences between themselves and their characters. King, in particular, has solid insights into the complex Lemon, while Bethel acknowledges Wade’s frequent shirtlessness. (Bethel also rightly points out that there’s a surprising lack of actual sex considering all the people who are involved with each other.)

“Shut Your Mouth!” Gag Reel: (3:57) Just your genial, run-of-the-mill bloopers with plenty of bleeped-out cursing and featuring all the different ways Cress Williams’ Lavon says “No, no, no!’ The gag reel can be found on Disc 4.

Unaired Scenes: (11:37) Twelve scenes of almost completely inessential material, except for a rare bonding scene between Zoe and Lemon where they talk about their respective estranged parents.

It’s hard to recommend any series where the main character is easily the weakest part of the show, and that’s the case with Hart of Dixie.

Fortunately, Bilson is backed by a capable and likable supporting cast. Hart of Dixie is the TV equivalent of comfort food: you know there are options out there that are more exciting or better for you, but this one has its simple charms and is easy to digest.

As I said earlier, I can’t exactly recommend you run out and grab this DVD set so you can hop aboard the just-premiered second season and find who is paired up with whom. However, I also wouldn’t be surprised if you stumbled onto an episode and found yourself getting sucked in.