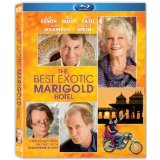 “I don’t want to grow older, to become marginalized and ignored by society. I don’t want to be the first person they let off the plane in a hostage crisis.”

Normally, a movie has to have the words “Harry” and “Potter” in its title to attract the caliber of British acting talent assembled for The Best Exotic Marigold Hotel. The characters in the film may be in the twilight of their lives, but the performers who play them are at the top of their game.

Oscar winner Judi Dench leads the ensemble as Evelyn, a recently widowed woman who has never done anything without her husband. (Even setting up her wireless network is an adventure, though I know people much younger than Evelyn struggle with that every day.) She is one of several British retirees who decide to spend their not-quite golden years in the titular Indian hotel.

Graham (Tom Wilkinson) abruptly retires from his post as a high court judge and returns to the country where he spent his youth. Douglas and Jean (Bill Nighy and Penelope Wilton) relocate to India because they lost a big chunk of their retirement money after investing in their daughter’s startup company. (The best they can afford in England is a depressingly beige flat.) Muriel (Maggie Smith) is a racist former housekeeper who racistly travels to India for a hip operation she couldn’t otherwise afford and that can be performed sooner. Norman (Ronald Pickup) is an older lothario with an eye for younger women, while Madge (Celia Imrie) is on the lookout for her latest husband.

Once the strangers arrive in India, they find the Marigold Hotel looks nothing like the luxurious hot spot in their brochures. Sonny (Dev Patel) is the dilapidated hotel’s young manager, who inherited the business from his father and had the idea of “outsourcing old age.” Although the Marigold has fallen into disrepair, (most of) the seniors try to bond and make the best of the situation.

Evelyn eventually starts blogging about her experiences and provides voiceover narration that might sound cliché if it weren’t being delivered by someone as good as Judi Dench. In fact, Dench is so characteristically strong that she’s not totally believable as someone struggling to strike out on her own for the first time. However, that strength as an actress also makes her the ideal choice to ground the ensemble.

I was most impressed, however, by the consistently excellent Wilkinson and his subtle, beautiful work as a man looking to reconcile with his past life in India. Smith channels some of the snootiness that has led to her career resurgence on Downton Abbey. (Her character here is a bit more cartoonish.) Meanwhile, I pretty much always enjoy Nighy whenever he pops up in a movie, and it was particularly fun seeing him bond on-screen with his Notes on a Scandal antagonist Dench. In fact, everyone in the main cast has pretty much worked with everyone else, and the camaraderie is both apparent and appealing.

Director John Madden (no, not this guy…or this guy) — working from a screenplay by Ol Parker — deftly balances the film’s comedic and dramatic aspects. (Just look at this review’s opening quote, a “woe is me” declaration that cuts itself down with biting wit at the end.) A lot of the comedy comes from some predictable geriatric humor — including Norman and his sexcapades — and the fish-out-of-water first act. The Best Exotic Marigold Hotel makes the point that getting old is uncomfortable and unfamiliar for all of us by literally putting its characters in the most uncomfortable and unfamiliar place imaginable.

The film stops well short of mocking its characters, and that humanity makes the dramatic parts more affecting. (Not to give anything away, but Evelyn herself says “put enough old people in the same place, it won’t be too long before one of them goes.”)

Of course, the plot still has to adhere to some storytelling conventions. As a result, we suspect the woman who refuses to leave her room will eventually come to love India, and the racist old lady will be less considerably less racist by the end. (To the movie’s credit, only one of those two things actually happens.) The movie also feels a bit overstuffed, even at 124 minutes, because there are so many storylines to serve. The biggest casualty is Sonny’s coming-of-age story — which feels like it could’ve been its own movie, if told from a different perspective — and Patel seems to compensate by giving an overly broad performance.

Fortunately, the cast is populated by actors who can do great things with the tiniest moments. As they tell this charming, touching story, they always give us the sense that “everything will be all right in the end. So if it is not all right, then it is not yet the end.”

The Best Exotic Marigold Hotel is presented in an aspect ratio of 2.35:1. The 1080p image is arrived at with an AVC MPEG-4 codec at an average of 32 mbps. I’ve had the chance to review a few recent Blu-ray titles from Fox (Mirror Mirror, We Bought a Zoo, The Descendants). Though the quality of the films has varied, they all contain fantastic video transfers. The Best Exotic Marigold Hotel is no exception.

There’s a definite contrast between the early muted scenes in England and the explosion of color in India, but the video presentation doesn’t go over the top in showing us the difference. Once the story moves to India, the transfer retains the film’s original grain, which perfectly complements the grimier parts of the country. The image is also refreshingly free of DNR, but remains plenty sharp when it needs to be. (Every crease on the main cast’s face is gloriously visible.) Strong black levels round out another successful Blu-ray video presentation for Fox.

The DTS-HD Master Audio 5.1 track succeeds in bringing to life a place that Evelyn calls an “assault on the senses.” The level of immersion is both subtle (Muriel in a busy hospital towards the beginning) and not-so-subtle (any scene on the bustling streets of India). That being said, the dialogue is always totally intelligible and the track utilizes every single speaker.

Behind the Story: Lights, Colors and Smiles: (2:34) I wouldn’t even call this a behind the scenes documentary. This is more like the film’s trailer interspersed with comments from the cast and director John Madden.

Welcome to the “Real” Best Exotic Marigold Hotel: (2:55) A too-brief doc exploring the crucial production design for the movie’s titular hotel. The Marigold Hotel was played by a tribal chieftain’s former palace.

Casting Legends: (3:55) Patel, Madden and screenwriter Ol Parker do a lot of (justified) gushing over the main cast. Dench, Nighy and Co. return the favor by speaking favorably about the movie’s Indian actors.

Trekking to India: “Life is Never the Same”: (2:45) The cast and crew talk about filming in Udaipur. Nighy said none of the actors had been to India before, which worked perfectly for their characters. Wilkinson talks about how the magnitude of India makes the country “elusive” and “impenetrable”, despite its beauty.

Tuk Tuk Travels: (1:26) Madden discusses the ubiquitous form of transportation for no apparent reason. At least this special feature is really short.

The ho-hum bonus material is the only disappointing thing about this Blu-ray. Don’t let the advanced age of the cast put you off — this well-crafted movie is a crowd-pleaser for audiences of all ages.