Posted in: Disc Reviews by Michael Durr on October 10th, 2012 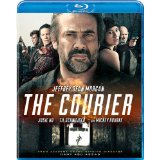 Direct to Video movies is usually just a clever term to mean “We have a small budget and B-List stars so we are going to skip the theater and go straight to video and hope to capitalize on the people who might pick this up on a very slow Friday night.” Today’s review is about a man simply known as the “Courier”. It could be a ripoff of the Transporter. It might be a mailman who handles packages by day and the ladies by night.
Bad B-Movies aside, let’s see how this one plays out.

We start this bright day with an amusement park. A wristwatch shows six minutes left. Let’s go over the cast of characters shall we? We have a grieving woman in peril, a deadbeat carnival owner and a gunman sitting on top of a rollercoaster. Wait, who’s down there? Why, it is the Courier (played by Jeffery Dean Morgan), he is here to deliver the goods for the banker’s daughter. What, are they not allowed to use train tracks anymore (federal regulations and all)?

The Courier makes it to the top and delivers the package. I am pretty sure that the carnival guy snickers and then throws the rope to the Courier as he leaves. But the Courier thanks to some theatrics is able to secure the line and hence save the day. There was much rejoicing (Yeahie!). But wait, we have to unmask the creature from the Black Lagoon. Oh, I’m sorry, I thought I was stuck in a Scooby-Doo episode for a second.

Back at the Courier’s hideout, the day breaks as he stares at a metronome. The Courier tosses back a couple to make the pain go away. He then gets dressed and goes off to the local gym where his old friend, Stitch (also known as Grandpa Eddie) (played by Mark Margolis) is looking at a fight with his granddaughter Lucy (played by Lily Solange Hewitt). Soon, his daughter, Deidre (played by Andrea Frankle) picks up Lucy and leaves.

The Courier and Stitch go into the back room to take care of the Courier’s wounds. As they chat, a guy named Lisby (played by Til Schweiger) shows up with a briefcase. He offers a case to the Courier and says if he delivers it, it will net him $100,000. But he has to do it in 2 and half days. In addition, he has to deliver it to a man named Evil Sivle. The Courier starts to protest and Lisby adds that if he does not, then those close to him will suffer harm.

With $10,000 in expenses and no clue where to find this character, he starts to dig into the New Orleans Police Department database (we forgot to mention that the Courier is a hacking extraordinaire). He finds out that Sivle used to run around with an old buddy named Maxwell. Maxwell’s accountant: San Fran Tannas (played by David Jensen) should know more. It looks like his next stop is St. Louis.

The Courier decides to get a couple of weapons for the job and then goes off to a warehouse to “borrow” a plane. But he’ll need a pilot to fly that plane. He calls on Stitch to get him a pilot that he can trust. Stitch sends a girl named Anna (played by Josie Ho) to help him out. The Courier protests and asks why he didn’t send Jimmy. After some bantering back and forth, the Courier accepts Anna into his plan and off they go to St. Louis. This is one trip neither will forget.

A box full of Cheerios has fewer holes than this movie. Goodness gracious, okay let’s go over the good points first. Jeffery Dean Morgan is a serviceable lead character and Josie Ho is pretty darn cute (too bad her acting is more wooden than George Washington’s false teeth). And that’s about it. The story is so-so, but it is more so that the actors seem to be sleepwalking through the roles. Oh, and by the way, Mickey Rourke is in this movie for about 5 minutes of face time and plays a major part. How’s that for smelling like a DTV movie?

That and nothing makes sense, Jeffery is a decent lead actor but not believable in the action sense. I would more expect him to be in a western where he is hanging over a bottle in a saloon. Other b list actors also pop up from time to time but their screen minutes are very limited and we are given no reason to care about the characters. Besides, how much hokier can you get than an unnamed action star who goes after a villain with “Evil” in his bloody name?

The video is in 2.35 Widescreen presentation in 1080P. This movie takes place in New Orleans from the looks of it (I’m pretty sure despite trips to St Louis and Vegas, the shooting never moved) and it does not exactly do much to pain the city in a positive light. The movie is very dark and grey and hardly shows any flashes that something special is going on. I mean, everything from the leading roles in this movie to every piece of scenery is dull, lifeless and mundane.

For the audio portion, we get a 5.1 English DTS-HD track (2.0 Dolby Digital English track also included). Dialog is fairly decent in the fact that at the very least you can make out all of the words despite a couple of accents sprinkled through the movie. However, once we get to surrounds or any sort of action in your face, the result is very flat. It almost sounds as if this was done on a soundstage way off in a dusty warehouse or seriously canned and hollow. English Subtitles are also available.

Jeffery Dean Morgan has done much better work than this (Watchmen, Supernatural, Grey’s Anatomy) and so has most of the actors and actresses in this film. But this film wears the DTV label and typecasts well. The story is paper thin, the actors move through with little care for their role and we get a very poorly written movie that might have worked in the 70’s/80’s. But in today’s environment, it purely fails. If a movie has intentions to be retro it has to follow through with all the good points as well as all of the bad points.

The disc technically is pretty average. Average video, average audio and some really random extras that might make you question the sanity of the director who put it together. Movies, especially ones that scream action drama need to make you care. This one unfortunately does not do that. It does not come across cool or interesting or anything that would scream awesome. A definite avoid on this one even if you are a Jeffery Dean Morgan fan. No recommendation here, the Courier can be sent back to where it came from.

Michael Durr has been reviewing movies for the better part of fifteen years now. He primarily enjoys thrillers, sci-fi, animation and even a little courtroom drama. His favorite films include Escape from New York, the Goonies and anything with Alyssa Milano. When he’s not praising Kurt Russell as the greatest actor of our time or scratching his head over a David Lynch flick, he’s spending time at home in Texas with his lovely wife, Lori and his amazing son. How they put up with him is a mystery, but even Basil Rathbone doesn’t have the time to solve that one.
“31 Nights Of Terror” Hostel & Hostel II ( Blu-ray) Bonanza: The Official Complete Fourth Season