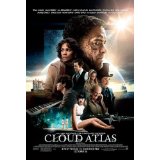 “When creating art, there’s a fine line between greatness and nonsense.” You know who said that?  I did as soon as the end credits for Cloud Atlas started rolling. The sci-fi adventure/historical drama/mega-budget drag show has modest aspirations: all it’s trying to do is tell an epic, centuries-spanning story about the human condition. Needless to say, Cloud Atlas is easily one of the most ambitious and audacious films released in the last few years. No wonder it took three directors to wrestle this thing into theaters.

Cloud Atlas is set in 1849, as an ailing lawyer (Jim Sturgess) treks to America via the Pacific Ocean. The film also follows dueling composers (Ben Whishaw, Jim Broadbent) in 1936 Cambridge, an intrepid journalist (Halle Berry) in 1973 San Francisco, a put-upon editor (more Broadbent) in 2012 London, a genetically-engineered server (Doona Bae) in a dystopian, near future version of Seoul, and a tribesman (Hanks again!) who encounters a civilized woman (Berry one more time) in a distant, apocalyptic future. Each story is transferred to the characters in the next one through a diary, love letters, a cheesy movie adaptation, a hologram and more.

With dozens of characters covering about 1,000 years, adapting Cloud Atlas for the big screen was, to say the least, a daunting task. As you can probably tell from the previous paragraph, the filmmaking trio solved part of that problem by utilizing the same core cast for each of the six stories. This proved to be a savvy move because it established a simple yet strong visual connection between all these wildly different segments.

While the novel presents the first half of each story in chronological order before tying everything together in the end, the filmmakers made another bold decision by aggressively jumping back and forth between all six narratives. By doing this, they risked sacrificing the integrity and impact of each story. (If any story got shortchanged, it was probably the 19th century tale of Adam Ewing and his dangerous trip to America.) However, I think the move ultimately paid off. What works in a novel doesn’t necessarily work as well in a film (and vice versa). The result here is virtuoso sequences like the one that cross-cuts between two enslaved characters running for their lives at perilous heights hundreds of years apart.

At this point, I feel like I should point out that — despite touching on some Big Ideas — there’s plenty of fun to be had in Cloud Atlas. Put it this way: the film’s 164-minute running time wasn’t nearly as butt-numbing as 137 minutes of The Master.

I can’t even remember the last time I enjoyed Hanks this much on the big screen. (In a non-Toy Story capacity, of course.) Hanks is probably the most well-liked movie star of his generation, but the actor clearly relishes the opportunity to play some of the film’s more outrageous characters. The cast is universally strong and impressively performs — and sometimes switches genders — through some outlandish makeup and costumes. (If anything, the movie demands a repeat viewing so you can try and spot everyone.) I was especially impressed by Berry in the 1970s segment, Whishaw as the lovelorn composer, Bae’s humane expressiveness in an oppressive future, and Broadbent in everything. It’s also strangely comforting to know that, throughout the course of 1,000 years, Hugo Weaving will always be scary and Hugh Grant will always be kind of an ass.

The film’s structure is like that of The Fountain on steroids. Snobs may even refer to Cloud Atlas as “The Tree of Life for dummies.” And yes, some of the thematic (freedom from a variety of oppressors) and symbolic (comet birthmarks; characters falling) links are not exactly subtle. In fact, the filmmakers’ insistence on repeatedly banging home the main ideas (“Our lives are not our own. We are bound to others, past and present. And by each crime and kindness, we birth our future”) makes them seem paranoid that this stuff is going to fly over audiences’ heads. That means we get too many quotes that sound like they came straight out of a fortune cookie, like “all boundaries are conventions waiting to be transcended.”

And that brings up the biggest mystery surrounding Cloud Atlas: what exactly is this movie’s audience? Obviously, curious fans of the novel will want to check it out, but I don’t think they can justify the movie’s reported $100 million budget by themselves. (Warner Bros. chipped in about $20 million, but the rest came from international production companies, making this one of the most expensive independent films of all time.) I don’t see young moviegoers flocking to this one in droves, and I don’t think it will attract older audiences with no prior connection to the material. I haven’t even mentioned how the film’s extended running time limits the amount of showings per day.

To be clear, exactly zero percent of that $100 million budget came from my pocket, so it’s not like I have a financial stake in how well Cloud Atlas does. The reason I care is because I’d hate for this movie to fail to the point that filmmakers and studios are further discouraged from taking a chance on big, bold, strange stories that don’t fit comfortably into the broad PG-13 box.

There’s a fair amount of nonsense in Cloud Atlas — a fellow reviewer astutely and hilariously pointed out that it sounded like Hanks was having a stroke as his character was delivering the movie’s opening monologue — but the film also achieves moments of greatness. My favorite thing about Cloud Atlas is that, unlike too many of its cinematic contemporaries, it even attempts to achieve such greatness on such a grand scale.