Posted in: Disc Reviews by Gino Sassani on November 4th, 2010 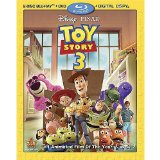 “The Toys Are Back In Town”

That’s right. All of your favorite toys are back in Pixar’s latest great film Toy Story 3. This time the toys are dealing with the inevitable. Andy (Morris) is about to go off to college. It’s been a long time since he’s played with his friends, and they are getting desperate and worried they will get tossed away. Although Andy bags them to be stored in the attic, a misunderstanding sends them to the curb and a date with the garbage truck. After that close call they decide to get themselves donated to Sunnyside Daycare, where they hope to live out their lives with tons of children to play with them. But things aren’t all that sunny at Sunnyside. The place is ruled by the iron paw of Lotso Bear (Beatty) and his cronies. The bad guys include Big Baby. He and Big Baby once were accidentally abandoned by their owner and Lotso was replaced, making him bitter. Now the toys have to escape the armed camp of Sunnyside.

All of your favorite voices are back with the exception of the late Jim Varney as Slinky. Blake Clark takes over for his departed buddy. Tim Allen is back as Buzz. Tom Hanks is still Woody. Don Rickles and Estelle Harris as Mr. & Mrs. Potato Head. John Ratzenberger is still Hamm. Joan Cusak is back as Jessie. Wallace Shawn still provides the voice of Rex. Even John Morris, who has been doing Andy since they were both 7 years old, has returned. There are many new toys and voices in the film. Ned Beatty provides the deep sinister voice of Lotso Bear. Michael Keaton is Ken. Emily Hahn is young Bonnie. There’s more music from Randy Newman. This is Toy Story through and through, and you simply won’t be disappointed.

It’s hard to believe it, but Toy Story was the very first computer-generated animated feature film. CG graphics had already appeared as parts of films starting with the “Genesis proposition video” from Star Trek II: The Wrath Of Khan. It was a rather fitting movie for this Hollywood and technological first to occur. The piece was rather short and not as breathtaking as we’ve come to expect today, but it did herald the beginning of a new era in filmmaking, to be sure. What better place for such an historical technological breakthrough than in Star Trek?

Pixar had already been making short subject computer animation. If you ever have the opportunity to check out their collection of shorts, you can’t help but be impressed with the evolution of the process as evidenced in these short films. The awards were rolling in for the upstart company, and it was only logical that sooner rather than later they would be the ones to attempt a full-length feature film. Of course they were quite a small company at the time with no distribution network in place to launch a major motion picture. There wasn’t much of a promotional arm to the company to create the kind of buzz, pun intended, a full length film would require. The truth was that Pixar’s small size, which was so much of a creative asset, just wasn’t up to the kind of task they were taking on. The first step would have to be to find a partner with the name recognition and resources to back up such an ambitious project. They would likely be betting the future of the company on this one effort. The choice was obvious. They would tie their fortunes together with the same company that took the very same risk 70 years ago. Walt Disney had created the very first animated feature film with Snow White And The Seven Dwarfs. The result started an entire industry and put that one-time fledgling company on the map. Would Pixar be able to make the same impact on the industry that Disney had so many decades before? Anyone who has had the pleasure of seeing Toy Story knows the answer to that question. Lightning did not strike twice, but a third time with Toy Story 3.

In the long run what was more important to Pixar and its relationship with Disney wasn’t the milestone that Toy Story provided being the first computer-animated feature. Movies are, as much as we’d like to think otherwise, a business. In the end, a film has to make some money. Toy Story was like a private printing press for the two companies bringing in nearly $200 million at the box office. Add another nearly $200 million in foreign receipts, and this prototype of a movie pulled in nearly a half billion dollars before the first DVD was released. That’s huge for what was basically a children’s cartoon. The second Pixar film would be A Bug’s Life, and it would bring in nearly the same kind of jingle. The cry was too loud to ignore. The people wanted to see more of Buzz, Woody, and the rest of Andy’s toys. The edict came down from on high, and what once took them 4 years to do, Pixar was asked to do in about 18 months. Now we would find out if Pixar was a viable company that could produce films reliably and on a faster turnaround. Would the studio compromise on quality just to answer the gate call of millions of dollars waiting to be plucked from the pockets of eager moviegoers? Several films later we know the answer to that question, but it was very much an answer in doubt in 1999. But another $485 million later in worldwide box office settled the question once and for all. Pixar didn’t just start the computer animation business. They didn’t just define the industry. They would continue to lead it for the next decade … and apparently, beyond.

It’s ironic that the release of Toy Story 2 would be the event that almost separated the Pixar and Disney teams. With so much money on the line, Disney was eager for more in the franchise and was thinking about a cheaper direct-to-video series to carry on these characters. I’m a Disney fan, but they have cheapened so many of their wonderful properties this way. In any case, the contract between them gave this right to Disney, and they fully planned to exercise it. Pixar was so upset that they decided not to renew the relationship when that current contract expired. They actively pursued other suitors, and from the rhetoric on both sides it appeared a done deal that the two would part company. But in one of those strangest of twists, Pixar not only returned to Disney, but became a part of the parent company. Now Disney owns Pixar, and the relationship is safe for many years to come. Finally, the point of contention, that third Toy Story film is upon us. But it wasn’t a watered-down direct-to-video disaster. It’s a fully-fleshed-out feature film with all of the voice actors in the fold. Several had made it known that they would not participate in a Toy Story project from Disney that did not have the blessing of Pixar. But Pixar and Disney are now one and the same.

Toy Story 2 is presented in its original aspect ratio of 1.78:1. The 1080p image is arrived at with an AVC/MPEG-4 codec at an average 35 mbps. If you can believe it, this transfer keeps getting better than the first two. The colors are just that much brighter. The sharpness is just that much sharper. The level of detail is even more astonishing. The biggest improvement between the films, however, wasn’t so easily noticeable in standard-definition DVD. With the -definition detail of a Blu-ray, we discover how much better the textures are in this film. It is most noticeable with Woody. You really get a sense of the cloth of his costume here.

The DTS-HD Master 7.1 continues to be as impressive as the image presentation, if you can believe that. All of the same points I mentioned for the first film are just as valid here: The audio has the most natural sound. The Randy Newman songs continue to have the same dynamic quality to them you remember from the theater; even better as far as I can tell. The quality is rich with both highs and lows perfectly balanced and rendered. There’s plenty of ear candy, and this is a more aggressive mix. Again, you’ll encounter everything placed so well that you’re right there. Dialog can be completely understood at all times. Another truly impressive production from top to bottom.

There are four discs provided in this set. The first disc provides the film and three features. The second provides the meat of the bonus section. You’ll also get a Cinexplore watching mode here. The third and fourth films give you a DVD and Digital Copy of the movie.

Day And Night: (6:05) This is the short that you saw in the theaters before the film.

Buzz Lightyear MissionLogs: (4:30) More on Buzz’s trip to the International Space Station and his return trip on the shuttle.

Toys: (6:37) How many to characters? This feature counts the ways. It’s a look at the tweaks in the old characters and the design of all of the new toys.

Goodbye Andy: (8:02) A look at designing the emotional climax of the film that required emotions out of the human characters instead of the toys.

Accidental Toymakers: (3:56) When the first film started they couldn’t get a single major toy company to make the film’s central toys. Meet the small toymaker whose life was changed by taking on the job.

A Toy’s Eye-View: (5:19) A look at creating the Toy Story Land in the Paris Disney attraction.

Roundin’ Up A Western Opening: (5:42) A closer look at the opening video game scene.

Bonnie’s Playtime – A Story Roundtable: (6:26) The crew gather to talk about the issues of making the Bonnie tea-party scene.

Setting A Story In Motion: (8:13) Screenwriter Michael Arndt talks about how to get started on a script. He gives you an amusing look at the stages of script development.

Life Of A Shot: (6:57) Step by step look at the scene where the Barbie car drives across the desert in the opening scene.

Paths To Pixar – Editorial: (4:31) The film’s editing team show you how they do their jobs.

Sequels, as I’ve said here many times, are very risky business. But when you put the kind of passion and care into every frame you produce like the Pixar folks always do, it’s magic every time. The audiences aren’t getting smaller. They are getting larger. This one pulled in over a billion dollars at the box office. By the way, that’s double what the previous film brought in. With Pixar now about to extend both the Cars and Monsters, Inc. franchises, I hope that the same love is given that was attended to these three films. It seems like only yesterday that we were first introduced to these characters. “Andy’s going to college. Can you believe it? ”

Gino Sassani is a member of the Southeastern Film Critic's Association (SEFCA). He is a film and television critic based in Tampa, Florida. He's also the Senior Editor here at Upcomingdiscs. Gino started reviewing films in the early 1990's as a segment of his local television show Focus. He's an award-winning recording artist for Omega Records. Gino is currently working on his 8th album Merchants & Mercenaries. Gino took over Upcomingdiscs Dec 1, 2008. He works out of a home theater he calls The Reel World. Favorite films: The Godfather, The Godfather Part II, The Body Snatcher (Val Lewton film with Karloff and Lugosi, not the pod people film), Unforgiven, Gladiator, The Lion King, Jaws, Son Of Frankenstein, The Good, The Bad And The Ugly, and Monsters, Inc.
Highlander 2 (Blu-ray) You Might As Well Live