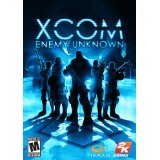 It’s time to take out some more bad guys?

2k Games has been a leader video games for years. Many of you have been waiting for it and now it’s here. We have a copy of  XCOM: Enemy Unknown for the PS3 to give away to one lucky winner. Michael Durr’s about to drop his review on us soon. Control Earth’s defenses against an alien invasion with this exciting new game from 2K Games.

Gino Sassani is a member of the Southeastern Film Critic's Association (SEFCA). He is a film and television critic based in Tampa, Florida. He's also the Senior Editor here at Upcomingdiscs. Gino started reviewing films in the early 1990's as a segment of his local television show Focus. He's an award-winning recording artist for Omega Records. Gino is currently working on his 8th album Merchants & Mercenaries. Gino took over Upcomingdiscs Dec 1, 2008. He works out of a home theater he calls The Reel World. Favorite films: The Godfather, The Godfather Part II, The Body Snatcher (Val Lewton film with Karloff and Lugosi, not the pod people film), Unforgiven, Gladiator, The Lion King, Jaws, Son Of Frankenstein, The Good, The Bad And The Ugly, and Monsters, Inc.
Contest: Win One Of Two Great Titles From Lifetime: What Color Is Love/ The Fantasia Barrino Story “31 Nights of Terror” Really Horrifying Top Five Lists