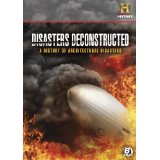 “This is your wake-up call.”

History is replete with disasters. Some are natural or acts of God. We see them almost every year. It might be a hurricane in the Gulf or an earthquake in South America. Lives are often lost, and damages toll into the millions. We can’t completely predict them. All we can do is try to be prepared when the next one strikes.

Then there are those disasters which are caused my man himself. Of course, some of these are deliberate acts of terrorism. But some of these disasters are caused through mistakes, negligence, or just plain poor design. This collection takes up these mistakes in judgment which also often cost lives and millions of dollars in damages. This is not a particular series. Instead this collection is a 6-disc collection in three very distinct parts. Each of these is spread over two discs.

The first part contains episodes from History’s Inspector America. Timothy Galarnyk is an experienced contractor and bridge and road inspector. He serves as the host of the show. He travels around the country and inspects our infrastructure. His findings can be quite sobering. You’ll watch as he goes under a bridge and pulls the concrete apart with his bare hands. His finds holes you can put your fist through in the metal of these bridges. It’s not just bridges. He inspects water and sewer systems where collapses have cost lives and money. He claims we’re looking at about $2 trillion to put our infrastructure back in safe condition. In this collection he visits Minneapolis, Minnesota, Los Angeles, Seattle, San Francisco, Vegas, and Detroit.

The second part features documentaries on The Titanic and The Hindenburg

Titanic’s Achilles Heel examines the engineering design of the ill-fated ship. A group of History investigators look to see if a design flaw caused the ship to break in half. If so, it kept the ship from being able to sustain the passengers, perhaps until help could have arrived. They dive her sister ship The Britannic which was sunk off Greece but in water shallow enough to dive. The idea is that an expansion joint was badly designed and could have caused the ship to break at that point. They also hire a group of accident recreation people who often investigate ship mishaps for insurance purposes.

The Hindenburg: Rip Torn serves as the unlikely narrator for this comprehensive look at the accident that ended lighter-than-air passenger ships forever. The documentary examines the entire history of this kind of craft and includes vintage footage of many of the ships in use. There are interviews with survivors of the disaster and others who worked on the ship but not on that fateful voyage.

What Went Down: A group of investigators apply modern technology to revisit the Hindenburg disaster. It’s their mission to put together eyewitness accounts, documentation, and footage to recreate a video of the disasters with actors and green screen f/x.

Tech-Effect – The Hindenburg: This very brief show looks at the technology aspects of the disaster.

The last two discs feature episodes from the long-running series Modern Marvels. This is one of History’s longest running shows, and it’s now heading into its 17th season. There have been a series of episodes collectively called Engineering Disasters. Here you’ll find episodes that deal with famous engineering disasters. There are plenty of bridge, building and road collapses. Some famous disasters include the Exxon Valdes, MGM Grand Hotel Fire, Bhopal Death Cloud, and two that I had some personal connection to.

In Pennsylvania just a few miles from where I grew up stood the City of Centralia. An underground coal fire started in 1962 and still burns today. The residents had to be relocated. I’ve actually visited the town in the 1970’s, and you can pour water on the ground and watch it turn instantly to steam. It’s estimated the fire will burn for more than 100 years.

The second involves the destruction of the Sunshine Skyway Bridge here in the Tampa Bay area where I live now. In 1980 a freighter struck the bridge killing 35 people.

If you’re into disasters, this collection will be just the thing. It might make the perfect gift for that history buff who might also have an interest in these kinds of events. It’s a nice little package and the cost is low enough to make it an offbeat but informative addition to a video library. It’s our job to bring these kinds of things to your attention. You see, “I’m looking out for you“.

Gino Sassani is a member of the Southeastern Film Critic's Association (SEFCA). He is a film and television critic based in Tampa, Florida. He's also the Senior Editor here at Upcomingdiscs. Gino started reviewing films in the early 1990's as a segment of his local television show Focus. He's an award-winning recording artist for Omega Records. Gino is currently working on his 8th album Merchants & Mercenaries. Gino took over Upcomingdiscs Dec 1, 2008. He works out of a home theater he calls The Reel World. Favorite films: The Godfather, The Godfather Part II, The Body Snatcher (Val Lewton film with Karloff and Lugosi, not the pod people film), Unforgiven, Gladiator, The Lion King, Jaws, Son Of Frankenstein, The Good, The Bad And The Ugly, and Monsters, Inc.
Astonishing X-Men Collection (Blu-Ray) The Day (Blu-ray)