Posted in: Disc Reviews by Michael Durr on November 15th, 2012 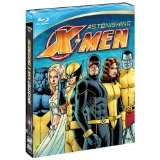 Most of you reading this now have probably seen my reviews for part 2 and part 3 of this series. Well, the wonderful people at Shout Factory sent me a compilation disc in blu-ray nevertheless and I am very excited to bring it to the reading public for review. The important medium of digital or motion comics is about to receive its most significant package yet. But enough about an introduction, lets directly dive into the complete collection of Astonishing X-Men or better known as the Joss Whedon run of X-Men.

Gifted (Disc One)
The X-Men prepare for a new year of students. Jean Grey is gone, but Emma Frost has taken her place and Kitty Pryde has returned. The students are promising but still have a lot to prove. However, when a “mutant cure” is announced by Benetech scientist, Dr. Kavita Rao, the students and the team get concerned. The now almost feline Beast pays her a visit to find that her methods might not be ethical. In addition, an alien named Ord has taken a party hostage and it is up to the team to do something a little astonishing.

Dangerous (Disc One)
A new mutant named Wing has lost his powers in the aftermath of the confrontation with the alien, Ord. While he struggles with what to do with the rest of his life, the X-Men with reunited member Colossus and Fantastic Four team up (sort of) to battle a deadly monster. Meanwhile, the new mutant recruits learn combat skills in the Danger Room. However, the real fight is about to begin when Wing decides to make an impact and take his own life in the middle of the floor.

Torn (Disc Two)
Kitty Pryde and Colossus have become closer than ever, but when a battle from inside the X-Men mansion takes place, they will have to put their affection on hold. The Hellfire Club has descended on the X-Men mansion. Their desire to stop the X-Men will certainly start at the new member simply known as Emma Frost. Emma Frost’s long history with the club could make her an influence or a target. The mutants start to fall one by one in a battle for survival.

Unstoppable (Disc Two)
A grand prophecy involving one of the X-Men mutants has been told on Breakworld that could very well destroy or save their world. Agent Brand and the X-Men fly to the alien world to investigate putting the key players in place for the climatic event. But when the X-Men discover that a giant missile is pointing directly at their own planet, they have to band together to figure out how to avert disaster. But only one X-Men truly has a chance to change the outcome of the Earth in this important final showdown.

In these twenty-four issues (and one giant size issue), we take a fascinating ride as we watch some of the most interesting adventures the X-Men have had in their long history. The evolution of some of these characters such as Kitty Pryde, Colossus and new mutants like Armor is fascinating to watch. Also, Emma Frost as an X-Men is truly awesome to watch and her every move makes the pages (or scenes in this case) turn that much easier. Even static characters such as Wolverine or Cyclops play important roles here.

All of the adventures are written by Joss Whedon and drawn by John Cassaday. The adventures are for the most part impressive. The only misstep is probably the second adventure: Dangerous where the story takes an odd turn by trying to include the Fantastic Four and spend the rest of the time focusing on the youngsters who are not ready to take the spotlight. Speaking of finding odd times to include other super hero factions, check out the fourth adventure. At least there, it makes the way for an important plot point.

The motion comic medium really seems to be taking off in these four adventures. I am hopeful that we continue to see a future for not only the X-Men but many other members of the Marvel Universe. These discs are reasonably priced (the blu-ray set is a little more aggressive but when you take into account the value per adventure, it is highly worth it) and in my opinion reach a greater amount of people which is the most important part.

The video is in 1.78:1 widescreen presentation in 1080p resolution. The way they make these motion comics work is still a bit wonky but the future is darn bright for this medium. The first features differs some from the other three as it is more of an upconvert from the dvd and was not made for HD. However, color is still strong throughout and it is really amazing what they can do with it now as opposed to several years ago when digital comics just moved around the screen with no motion at all.

For the audio portion, we get a 2.0 PCM Stereo (48) track for the first feature and a 5.1 DTS-HD in English for the other three. The PCM is not bad, it does the job and there are no complaints from me. But as good as that first feature is, it really kicks into third gear once the DTS-HD starts going. Fights are dynamic, and surrounds are used as awesomely as possible. The only time where dialog gets lost is when the aliens speak a lot (see the last feature) and some of their gruffness comes through.

The interesting thing about the series is that it does end on something of a cliff hanger. The story does get some resolution in what would follow as the Warren Ellis run of Astonishing X-Men and it will be interesting to see if they are brave enough to keep going with the series. I do not think they will honestly (and will probably move to something else), but I can always hope. This collection of twenty four (plus one) issues spread across four adventures is consistently entertaining a pleasure to watch.

Technically these blu-ray discs are a mostly positive bag. Sure the first adventure is an upconvert but the rest of the adventures are brilliant high definition delicious goodies. The extras feel fluffy and I would have loved to see some commentaries here from the likes of Joe Quesada or possibly even the great Joss Whedon. This set is highly recommended and a most unexpected blu-ray set. Pick it up while you can, there will not be too many sets for the hungry comic book lover in all of us.

Michael Durr has been reviewing movies for the better part of fifteen years now. He primarily enjoys thrillers, sci-fi, animation and even a little courtroom drama. His favorite films include Escape from New York, the Goonies and anything with Alyssa Milano. When he’s not praising Kurt Russell as the greatest actor of our time or scratching his head over a David Lynch flick, he’s spending time at home in Texas with his lovely wife, Lori and his amazing son. How they put up with him is a mystery, but even Basil Rathbone doesn’t have the time to solve that one.
My Big Fat Greek Wedding (Blu-ray) Disasters Deconstructed: A History of Architectural Disasters