Posted in: Disc Reviews by Brent Lorentson on November 16th, 2012 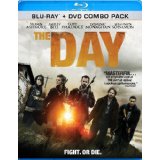 To be a cannibal or not to be?  That seems to be the question we will all have to ask ourselves if we ever go on to live in a post-apocalyptic society.  Sure it’s in the name of survival, but can things really get so bad that one day I could be huddled up with a group of survivors and everyone wondering whose the next to keel over and if there are any special recipes someone would like to try out?  Remember it’s all in the name of survival, and in the words of Andrew Zimmern, “If it looks good, eat it!”

The Day isn’t just a movie about cannibals; in fact they are simply in the background for the story of five survivors trying to make it day to day in a cruel, unforgiving landscape.  It’s never made clear what has happened to the world our survivors live in, but it’s understood that a large portion of society is dead, and those that remain can do nothing more than prepare themselves for the inevitable.  These survivalist movies need to be bleak and depressing, because let’s face it, when the world has managed to reach the point of creating a near extinction of the human race, having hope is a bit naïve.  And that seems to be what the film makers understood when creating The Day.

The group of survivors has been hiking through the countryside for days.  They’re tired and hungry, and to make matters worse one of the members of the group has fallen ill.  Rick (Dominic Monaghan), after reviewing the map, makes the decision to take shelter at a farmhouse so they can rest and recuperate.  Members of the group protest, fearing the others could be nearby and staying is simply too dangerous. Rick argues his point and reluctantly they decide to stay, but for only one night.

When the group wakes up in the morning, they take time to investigate the house to scavenge around for supplies.  In the process, when the men discover food in the basement, they trip an alarm that results in sealing them inside.  The girls make an attempt to try and free them but it’s no use, and it’s understood the alarm is a signal, and it’s for something they believe isn’t good.  This builds for some moments of suspense, but the result just left me wanting more.  When we finally get to see “the others” they simply look no different from our group of survivors; the only difference we learn is that they enjoy eating people.  This isn’t a spoiler, since this is revealed early on in the film.

During the conflict between the girls and cannibal survivors, it is revealed one of the members of the group may not be what they say they are.  I’m purposefully being vague because this little shred of mystery is what the film has going for it.  And with the promise of more cannibal survivors to return, the group has to decide whether to run or stand their ground.  The end result reminds me of the siege from Assault on Precinct 13, which in my opinion is always a good thing.

It doesn’t take long to pick up one of the annoying flaws this film is filled with.  It’s a survivalist film and you expect the characters to be tough, but no character throughout the film has a distinct voice.  Characters decisions change in the heat of the moment; characters say and do things not because they define character but simply to move the plot along.  I believe this is a grave mistake, because we never find that character to identify with, not one to love or hate.  If we have no one to root for, then the viewer never has a connection to the film.  And without a connection, no matter how small it may be, to the characters, you can’t possibly make any impact on us the viewers.

The look of the film, though, is quite striking.  All the colors have been washed out to the point the images are almost black and white.  Throughout we see sprinkles of color, but the cold black and white look helps reflect the life of the survivors, and that is you need to fight to survive or do nothing and die.  Without a doubt this is a world meant for not just the strongest to survive but also a world where the line of right and wrong isn’t so clear, and that honesty is what redeems this film.

The Day is presented in an aspect ratio of 1.85:1.  The 1080p image is arrived at with an AVC MPEG-4 codec at an average of 29mbps.  Shot on the RED camera, the film is loaded with beautiful cinematography, and it’s almost a shame all the color has been stripped away from this film.  But muted washed-out colors fit and help create the tone of the film.  Sure, the look will remind people of Saving Private Ryan and the many films that used the same color palette, but in the case of The Day I can’t imagine it looking any different.  There isn’t much separation in the blacks because of the color palette chosen, but it works, creating a deeper darkness where it elevates the mystery of what danger may lurk beyond the light.  Overall a nice transfer.

The Dolby TrueHD 5.1 track worked well here; if anything I believe it was underused.  The score produced by Rock Mafia sounds great, very haunting and fits perfectly with the tone of the film.  The dialog sounds good; it’s not a dialog-heavy, film and most of the characters are brooding and shouting throughout, but the sound remains balanced enough where I never had to adjust my volume to hear what they had to say.  As for the sound mix during the action scenes I was a bit underwhelmed here, could have used more ambiance or played with the sound design more during the siege sequence.

Audio Commentary: Exec Producer/Director Doug Aarniokoski, Producer Guy Danella, and Writer Luke Passmore: Your average commentary with the some of the guys responsible for making this film possible.  Nothing really stood out from the commentary, I’d recommend it only for those who are big fans of the movie and possible film students that would like to learn a little more about the trials of making a film.

Though the film falls short on being great, it’s still a fun little movie to sit back and enjoy.  This would be a good little flick to check out during the Walking Dead hiatus that will be upon us in a couple weeks.

Brent Lorentson is a horror writer and film critic based out of Tampa, Florida. With a BA in Digital Film, he co-wrote and co-directed Scavenger Hunt. His short stories have appeared in various horror anthologies. In 2019 his short script Fertile Blood will be a part of the anthology horror film Slumber Party. He is currently working on his first novel A Dark and Secret Place set to be released in late 2019. Favorite Films: Taxi Driver, Fight Club, I Saw the Devil, The Wild Bunch, Dawn of the Dead, A Clockwork Orange, Pulp Fiction, Heathers, The Monster Squad, and High Fidelity.
Disasters Deconstructed: A History of Architectural Disasters Friends: The Complete Series (Blu-ray)