Posted in: Disc Reviews by Brent Lorentson on November 20th, 2012 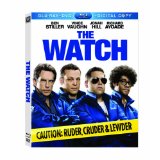 “What’s out there? Out in the great beyond? And what’s beyond that? What’s beyond beyond? The answer is, I don’t know. And quite frankly, I don’t want to know.”

There is a lot of talent in front and behind the camera on this film, and if this film delivered on its potential this could be a surprise moneymaking giant.  Unfortunately this film doesn’t manage to live up to its potential and becomes a missed opportunity for all involved.  I’m not saying I didn’t like the movie; in fact I enjoyed quite a bit, but when you have Ben Stiller, Vince Vaughn and Jonah Hill headlining your movie, I just expected a little more out of these guys.

Now about the movie.

What do you do when you live in the greatest town not just in the US but in the universe, and you have a suspicious murder at your local Costco?  Well, you form an elite neighborhood watch; at least that is what Evan, (Stiller) the Costco store manager, decides to do after his friend Antonio is found brutally murdered while working the overnight security shift.  Only three guys turn out to join the team, Bob (Vaughn), Franklin (Hill), and Jamarcus(Richard Ayoade).  With his crew in tow, Evan sets off to solve the murder only to find out that things are worse than they could expect.  Their perfect little town is about to be invaded by aliens.

As we get to see the neighborhood watch team in action, I couldn’t help but feel I’ve seen this all before in The Burbs as well as last year’s amazing alien invasion film out of the UK, Attack the Block.  But the film really doesn’t pick up much steam until the team accidentally hits “something” with their car while celebrating their first collar.  When they get out to check the damage, there is nothing to be found except what looks like an octopus tentacle and a lot of green goo.  It’s from here on the film heads into more sci-fi territory, and there is more fun to be had with an appearance by R. Lee Ermy doing what he does best as he dispenses obscenities at the four.

The alien design isn’t all that impressive, though it does have a few moments where it shines, my favorite being when the group takes a few photos with the alien creature.  Though the design wasn’t all too original, I dig the fact that the filmmakers went the man-in-suit route, and under all the makeup is Doug Jones (Hellboy and Fantastic 4: Rise of the Silver Surfer).  Further into the film there are plenty of CGI aliens, but it was nice to see the use of more practical effects here.

The biggest problem I had with the movie centers around the characters.  Instead of giving us chances to get to know them and develop any real emotional connection between them, we are given more penis-related jokes than I think have ever been put to film.  I’m not a prude and I like my humor raunchy with a side of crass, but here it just was overkill and wore out its welcome fast.  With the writing team of Seth Rogan and Evan Goldberg being credited as co-writers I had a good idea what to expect, but it left me wanting more.  Superbad for me is one of the best comedies in the past decade, not just because of the jokes but because of the relationship between the two friends.  And it’s the relationship and bond that is lacking here with The Watch.

There are several bits I did like in the film.  The basement reveal at Evan’s creepy neighbor’s house and the final showdown at the Costco are the standouts, but overall this just doesn’t hold up to some of the other comedies that have come out this year.  What I do see is the potential to churn out several sequels with this cast together.  I’d love to see these guys have to defend their neighborhood from an onslaught of zombies or some otherworldly foe.

The Watch is presented in its original aspect ratio of 2.35:1. The 1080p image is arrived at with an AVC MPEG-4 codec at an average 30 mbps. The film is certainly clean enough. The image is sharp. Colors come through just fine but there isn’t a lot of texture to this one. Black levels are a little disappointing. The night shots aren’t very convincing and almost appear shot day for night. Don’t look for inky blacks here.

The DTS-HD Master Audio 5.1 is fairly average throughout. Surrounds are never really that aggressive. There are a few moments of alien sounds that fill the back channels, but there isn’t going to be a ton of ear candy here. Dialog is fine.

Deleted Scenes: (24:39) There are an even dozen with a play all option. Lots of alternative or extended material here.

Jonah Alternate Takes: (5:39) Apparently they gave Jonah Hill extra takes to try out some improv. It’s even more raunchy than what was in the film.

Watchmakers: (12:16) This is the behind-the-scenes stuff, but it’s presented almost like an expose mockumentary.

Alien Invasions & You: (1:48) Cast and crew answer the question of what they would do if there really was an alien invasion.

Casting The Alien: (5:24) Another mockumentary where the alien is interviewed about the movie.

For those of you on the fence with this one, you may want to hold out for the DVD.  I’m sure there will be an uncut or extended director’s cut for you to enjoy.  But for those excited to see their favorite Dodgeball actors together on the screen again, then settle in with a big bag of popcorn and enjoy the show.

Brent Lorentson is a horror writer and film critic based out of Tampa, Florida. With a BA in Digital Film, he co-wrote and co-directed Scavenger Hunt. His short stories have appeared in various horror anthologies. In 2019 his short script Fertile Blood will be a part of the anthology horror film Slumber Party. He is currently working on his first novel A Dark and Secret Place set to be released in late 2019. Favorite Films: Taxi Driver, Fight Club, I Saw the Devil, The Wild Bunch, Dawn of the Dead, A Clockwork Orange, Pulp Fiction, Heathers, The Monster Squad, and High Fidelity.
History In 3D (Blu-ray) Life of Pi