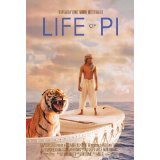 There’s an old showbiz adage warning performers to “never work with children or animals.” There’s also an impressive list of legendary filmmakers — including Steven Spielberg and James Cameron — who struggled mightily to make water-based blockbusters like Jaws and Titanic. (That list also includes somewhat less legendary names like Kevin Reynolds and Waterworld.) Apparently, no one told Ang Lee any of this before he agreed to make Life of Pi.

Like Cloud Atlas, Life of Pi is a recent big-screen adaptation of a best-selling book considered by many to be unfilmable. The list of Oscar-nominated directors who reportedly took a crack at Life of Pi over the years includes M. Night Shyamalan (The Sixth Sense), Alfonso Cuaron (Children of Men) and Jean-Pierre Jeunet (Amelie).

Unlike Cloud Atlas, the challenges with filming Life of Pi didn’t necessarily come from the structure or scope of the original novel; they came from questions like “There’s no way we can stick a real tiger and an actor in the middle of the ocean, right?” and “Are we absolutely sure the CGI tiger isn’t going to look completely phony?”

Pi Patel (played by Irrfan Khan as an adult) has quite a story to tell. In the present day, he regales a writer (Rafe Spall) with the astonishing tale of how he came to arrive in Canada after growing up in the French-infused Pondicherry region of India, where his family owned a zoo. How astonishing is Pi’s tale? He promises the writer that the story will make him believe in God. (And just like that, the gauntlet is thrown down for both Pi and the movie to live up to the hefty promise they’ve made to their respective audiences.)

After Pi’s father (Adil Hussain) decides to sell the zoo and move the family to Canada, a shipwreck leaves Pi stranded on a lifeboat with a hyena, an orangutan, a wounded zebra and a Bengal tiger named Richard Parker. (Naturally, there’s a story behind that.)

During the animal-centric opening credits, I got the nagging feeling that the Oscar-winning director of Brokeback Mountain and Crouching Tiger, Hidden Dragon was wildly overqualified to direct the world’s most expensive nature documentary. The opening act of Pi’s life also featured a few developments that were either a touch on the twee side (including the origins of his name) or a bit soggy and underdeveloped (the girl Pi quickly falls in love with; the rote conflict between his stern, rational dad and his kinder more spiritual mother). Fortunately, as Pi’s story progresses — and the boy comes into his own after accepting aspects of Christianity and Islam, in addition to Hinduism — Lee similarly finds his footing and brings a dazzling combination of style and humanity to Life of Pi.

The director achieves this while working in 3D for the first time, and I’m about to say something I never could have imagined saying as recently as a year ago: I really think the 3D is an essential part of the movie-going experience. The extra dimension adds a subversive layer of unreality to Pi’s incredible adventure that becomes crucial in the film’s final act. (Plus, there’s a part where the audience gets sprayed with tiger urine!) Lee also stages the spectacular shipwreck and Pi’s struggle to get on the lifeboat as a theme park ride from hell. (Though I wish David Magee’s thoughtful script had found a more elegant way to separate Pi from his family that didn’t involve an act of major dumbass-ery during a storm.)

I also feel the filmmaker should get degree-of-difficulty points for working with a largely inexperienced/unknown cast. I mean, the biggest “name” here is probably Gerard Depardieu, who is memorably nasty in his cameo as a French cook. Nineteen-year-old Suraj Sharma makes his film debut as the Pi we spend the most amount of time with. The actor’s challenge is similar to what Tom Hanks had to do in Cast Away, except instead of having a blood-smeared volleyball to keep him company — and the audience’s attention — on-screen, Sharma has a “deadly tiger” that wasn’t even really there during filming. Sharma gives an engaging performance that gradually becomes intriguingly animalistic the longer Pi is away from other humans.

This is as good a time as any to bring up the fact that the visual effects in Life of Pi are sensational; all the stunning scenery featured in the trailer (attached below) is nice, but the film’s greatest achievement is that I absolutely believed Richard Parker was a real character and not merely some sort of CGI puppet.

Whether Life of Pi makes you believe in God’s existence is, I suspect, entirely up to you. Since the novel came out more than 10 years ago, it has been hailed for its warm exploration of religious themes and the power of storytelling. After watching the film, I’d say it effectively illustrates not just the power, but the importance of telling stories. There’s a reason fables and epic poems have been around for thousands of years.

The slyest joke in Life of Pi is the way it uses a menagerie of wild animals to gently remind us that humans are the only species on the planet with the limitless ability to visualize or imagine things we’ve never experienced or seem downright impossible.

The Watch (Blu-ray) A Late Quartet