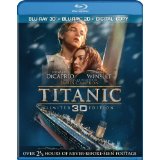 It was an excellent experience in 1997, when I reviewed Titanic as it opened in America’s theaters. A sweeping disaster epic wrapped around a passionate romantic drama, the film quickly dispelled early rumors that it would sink faster than the actual boat did 100 years ago. Yes, I liked the movie a bunch. I admired its scope, its detail, its amazing effects and its superb cast. Director James Cameron’s extensive, expensive production schedule was vindicated by critics and box-office alike. Yet, somehow I never really wanted to see it again. Too intense, too tragic, too overwrought. Maybe it was just that horrid Celine Dion song.

I was wrong.  “Titanic” is well worth a second look – especially if you can see Cameron’s astonishing reprocessing of his work into a three-dimensional spectacle par excellence. For one thing, you forget a lot of details after 15 years. And there’s no better way to be reminded of such things than to see them on a meticulously remastered 3D Blu-ray.

Everyone knows the story. On its maiden trans-Atlantic voyage, the gigantic luxury liner hits an iceberg, floods and sinks in a little over two hours. More than 1,500 crew and passengers perished, while only 700 or so were saved.

Of course, Cameron’s screenplay centers the sad story on a pair of star-crossed lovers – a poor Irish artist played by Leonardo DiCaprio and an upper-crust beauty portrayed by the gorgeous Kate Winslet. The vast sets Cameron constructed are displayed with mind-boggling brilliance. Sweeping panoramas depict the ship’s magnificent furnishings and vast interiors, while stunning close-ups portray the emotions of those who start out in exuberance and wind up in utter despair.

DiCaprio and Winslet earned international stardom for their roles in this mega-hit. Billy Zane as a horrible jealous snob, Kathy Bates as the egalitarian Molly Brown, and Frances Fisher as the leading lady’s social-climbing mother all contribute to the human emotions that sustain the surrounding spectacle. First there’s the exhilaration of setting sail for America in the world’s grandest floating city. Then, after a solid run of class conflicts and other subplots, the glee turns to horror as the doomed ship suffers its miserable fate and hundreds of victims are tossed mercilessly into a frigid, deadly ocean.

The movie needs no more actual reviewing. But the 3D conversion merits some extra consideration. For this critic, the added dimensional depth was reason enough to go through the gut-wrenching process anew. The decision pays major dividends: You can’t help but find fresh appreciation of Cameron’s creative brilliance. Part of the joy is simply in watching and wondering, “How did they do that?” How did he convert those sumptuous scenes into even more breathtaking visions?

You can find technical explanations on the accompanying documentaries. But the real amazement comes from simply putting on the glasses and sitting back for three spellbinding hours.

At first, the 3D is a little disconcerting. The early minutes look like an old ViewMaster put in motion, with human figures seemingly stuck on different planes of vision. But by the first hour’s end, you are consumed by Cameron’s reinvention. Staircases, passageways, ornate railings, lavish furnishings and one particularly huge ballroom are the types of details that seem somehow more prominent in the new, eye-popping format. The first two hours pass easily as you marvel at the vividness and impeccable detail that seem enhanced by the 3D process. The story itself even gets a boost – or perhaps that simply the result of rediscovering moments that had been forgotten over the years. (I still don’t care for that song that plays over the end credits.)

But it’s the climactic, crushing panic of the ship’s final hour that leaves the most memorable impressions. The vision of innocent passengers being tossed to their death isn’t exactly enjoyable, but it is certainly a tribute to their memory as well as a filmmaking landmark.

Equally astonishing are the images of the huge vessel flooding, breaking up, and ultimately sinking into the ice-cold sea, where a crew studying the wreckage provides the story’s modern-day bookends.

The MVC 1080/24p 3D transfer is flawlessly detailed, with rich color content displayed to perfection. The three-dimensional aspect helps focus the viewer’s attention on the most important images while keeping background details bright enough to appreciate.

They are all on other discs in the set. Subtitles come in English, French and Spanish, and the audio track can be switched to Dolby Digital 2.0, French or Spanish Dolby Digital 5.1, or an English-language track with descriptions for the blind.

Most of the DVD extras have been ported over:

New to this Blu-ray collection:

Reflections On The Titanic: (1:03:47) HD & The Last Word With James Cameron: (1:36:16) HD  These two feature length extras give you everything we got in the old documentaries and so much more. The pieces are loaded with plenty of Titanic lore both for the film and the ill-fated ship itself. They combine to make this the ultimate release for the highest-grossing film of all time.

If you think you’ve had enough Titanic for one lifetime, you’ll be pleasantly surprised by its 3D incarnation. James Cameron has already proven himself as a visionary, and this project confirms his status as a forward thinker who also knows what the public craves here and now.