Asylum (I Want To Be A Gangster)

Posted in: No Huddle by Brent Lorentson on November 29th, 2012 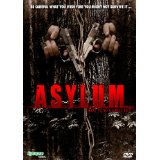 Like many others I love a good gangster film.  Not every film has to be epic like Once Upon a Time in America or The Godfather; the simple ones are just as good like Snatch and Sexy Beast.  In fact there are so many good gangster films out there I could almost argue is there really a need for any more entries into an already bloated genre?  Okay, silly question, because we’ll always want more of a good thing, but unfortunately with the good we have to take the bad.

When we first meet Jack (Julien Courbey) he’s running a little scam in a basement where he has high rollers playing a form of kneecap Russian roulette.  The concept I like, but there’s simply no suspense. We don’t know who these people are who are putting guns to their legs.  For those who have seen The Deer Hunter you know how intense these kinds of scenes can get, but instead all we have is a guy trying to look cool while two high-rolling thugs play this insane game of chance.

Jack eventually gains a partner and the two make a move to con a guy out of some money as well as a package of drugs he’s supposed to be delivering for his boss.  Since Jack is pulling the strings, the guy losses the money and the drugs.  Jack and his partner think they have it made and have pulled a fast one, that is until the crime boss, whose drugs they stole, has come looking for them, and he’s not too happy.

What follows for Jack are scenes that play out that are supposed to exploit Jack’s skill but his luck as well.  The running theme of “luck” is hard to go unnoticed here.  The thought is believed by the characters that to be a successful gangster you need equal parts of skill and luck.  Using blindfolds and shooting randomly at a group and deciding those left standing become gangsters, I mean to be blunt, that’s just stupid.  But what bothered me most about these characters, we have Jack who wants to be a gangster, but he also doesn’t want to kill anyone.  I’m sorry, but what kind of gangster is that?  Has Jack somehow confused crime syndicates across the globe for men who don’t kill for drugs and money but simply tickle their victims into submission?

Eventually Jack manages to upset the big crime boss and is taken into the middle of the woods to be chained to a tree and left to die.  This is a large portion of the film and where I had hoped things would start to build some suspense and desperation for Jack.  Instead we are given more nonsense.  We get a “caretaker” who lives out in the woods just to torment people that the crime family brings out to chain to trees.  And then we get a helicopter pilot sent out to see if Jack has died after a couple weeks.  Did the filmmakers just forget that Jack was driven out here to begin with?  And for cold-blooded gangsters they seem to have a lot of difficulty killing a guy.

Where I will cut this film a little slack is that it’s impressive that the film was shot with an estimated budget of $4,000.  The low budget does show in the footage; the whole film being shot in standard definition will definitely have some viewers thinking they could shoot something better with their camera phone.  Though we do get a handful of nice shots, it’s just not enough.  As a micro-budget film I appreciate what the filmmakers were able to pull off, but it’s just not enough to convince me to recommend this to anyone.

Brent Lorentson is a horror writer and film critic based out of Tampa, Florida. With a BA in Digital Film, he co-wrote and co-directed Scavenger Hunt. His short stories have appeared in various horror anthologies. In 2019 his short script Fertile Blood will be a part of the anthology horror film Slumber Party. He is currently working on his first novel A Dark and Secret Place set to be released in late 2019. Favorite Films: Taxi Driver, Fight Club, I Saw the Devil, The Wild Bunch, Dawn of the Dead, A Clockwork Orange, Pulp Fiction, Heathers, The Monster Squad, and High Fidelity.
The Odd Life of Timothy Green (Blu-ray) Perry Mason: The Eighth Season, Vol. 1