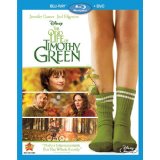 Some movie titles are almost comically blunt. Recent examples that didn’t leave much to moviegoers’ imaginations include Cowboys & Aliens, The 40-Year-Old Virgin and, of course, Snakes on a Plane. So when I saw the title of Disney’s latest live-action, family-friendly offering, I wondered just how odd this movie could really be. (At the end of the day, we’re still talking about a Disney film here.) Turns out, The Odd Life of Timothy Green is a strange little flick for a variety of reasons.

Jennifer Garner and Joel Edgerton star as Cindy and Jim Green, a childless couple living in fictional Stanleyville, “the Pencil Capital of the World.” The movie very quickly and subtly — no need to bum out or bore the younger members of the target audience — establishes Cindy and Jim are not able to have children of their own. The couple is understandably dejected. To cheer his wife up, Jim suggests they write down the qualities their ideal child would possess — including having a big heart and being honest to a fault — and place the pieces of paper in a box, which they bury in their garden.

After a freak thunderstorm that only occurs over the Green home, a dirt-covered boy named Timothy (C.J. Adams) suddenly appears claiming that Cindy and Jim are his parents. Timothy also has seemingly indestructible leaves growing out of his lower leg and, as he proceeds to hit every checkpoint on Cindy and Jim’s wish list, they soon realize their impossible dream has become a reality.

I neglected to mention that Timothy’s incredible story is told in flashback by Cindy and Jim as they attempt to convince an adoption agency that they are worthy parents. Although Shohreh Aghdashloo is nicely bewildered as the impossibly tolerant adoption agent, I thought the decision to frame the film’s events in this way was a cop out. I understand the intention: Aghdashloo is supposed to stand-in for the incredulous audience. However, I believe if you’re going to make a magical/fantasy movie you should go all in. Instead, writer-director Peter Hedges decided to hedge (heh) his bets by letting the audience know he’s keenly aware of the story’s improbability.

It’s too bad because I’m actually quite a fan of Hedges’ work. He earned an Oscar nomination for co-writing Hugh Grant’s best film, he’s responsible for that one time Katie Holmes was really good in a movie and my overly gushy review of his previous directorial effort, Dan in Real Life, is the stuff of legend. (Not really.) In fact, some people slammed the sentimental Dan in Real Life for being a Disney-fied version of a relationship movie, so I suppose it makes sense that Hedges’ next project would be an actual Disney film.

The filmmaker has assembled an impressive and likable cast to tell his story, which was conceived by Ahmet Zappa(?!). I think Garner is the rare actress who can believably do action (Alias, The Kingdom), comedy (13 Going on 30) and drama (Alias again), but I don’t think she’s particularly suited to play “clueless”, which is what she and Edgerton have to do as they try to figure out what to do with Timothy. Edgerton, sometimes struggling to bury his Aussie accent, is most effective in the scenes where he’s trying to work out issues with his own gruff father (David Morse). Garner and Edgerton make a fine couple, even if Cindy and Jim mostly alternate from being a bit vanilla to high-strung. (They desperately want Timothy’s childhood to be perfect.)

Adams — in the crucial title role — acquits himself nicely as a mature young actor, but the character of Timothy never really comes together. I realize he isn’t exactly supposed to be a fully-formed human being, but I never felt a strong connection between Timothy and his parents. Instead, that connection is saved for Timothy and a young girl named Joni (newcomer Odeya Rush). Unfortunately, the movie hints at a larger meaning to their bond, so the resolution to their relationship is a bit underwhelming.

In the end, The Odd Life of Timothy Green uses an unusual story to deliver a message about unconditional love that is so familiar, you’ll swear it’s based on a children’s book or some other work you’ve already seen.

The Odd Life of Timothy Green is presented in its original aspect ratio of 1.85:1. The 1080p image is arrived at with an AVC MPEG-4 codec at an average of 33 mbps. This lovingly-filmed feature is dominated by an autumnal color palette that comes through brilliantly (especially in wide shots) and warm flesh tones. Medium shots and close-ups are sharp while also maintaining an appropriately earthy amount of subtle grain that lends the image some texture. Black levels are also strong. The strong video presentation makes a somewhat old-fashioned story feel timeless.

The DTS-HD Master Audio 5.1 track utilizes all of the speaker channels in subtle and pleasing ways. (Obviously, the film doesn’t have a ton of explosions or gunfire.) I’m talking about the sound of a car on the road traveling from one speaker to another on the opposite side of the room or the way the magical thunderstorm seemed to be coming from everywhere. The dialogue is crystal clear and a significant amount of care is also shown to the evocative score by Geoff Zanelli. The track for this film isn’t exactly a powerhouse, but it does its job exceedingly well.

This is Family: (10:12) This documentary explores a lot of themes — the role of community in child rearing, the dangers of living through your children instead of simply creating a safe environment for them — that I didn’t fully get from the movie itself. There’s also praise for the kind and collaborative Hedges, who created a familial atmosphere on his set.

The Gift of Music: (9:15) Highlights the work of composer Geoff Zanelli and Oscar winner Glen Hansard (Once), who performed the deeply-felt “This Gift”, which plays over the end credits. Hedges marvels at how Zanelli and Hansard were able to capture the vibe of the film just by reading his script.

Feature Commentary with director Peter Hedges: Hedges — who speaks in a tone as gentle as this movie — states he wanted to make his version of Field of Dreams or It’s a Wonderful Life: a film that people watch over and over again to be reminded about the important things in life. I tend to prefer commentaries that are conversations between two or more people, but the extremely complimentary Hedges is a wealth of information. (For example, filming took place in February when there were almost no leaves on location, which was obvioulsy a problem for this particular project.)

(Bonus material available on the Blu-ray and DVD.)

Glen Hansard “This Gift” Music Video: (4:41) Featuring the vocal talents of the Brooklyn Youth Chorus, as well as fellow Once Oscar winner and musical collaborator Marketa Irglova, the video intersperses clips from the film with footage of Hansard singing his heart out at a piano.

Deleted Scenes: (5:46) This collection of five scenes reveals that the original plan was for Cindy and Jim to be aware that Timothy was gradually losing his leaves, a pretty significant plot point. Features commentary from Hedges and a Play All option.

The Odd Life of Timothy Green is a sweet, harmless and funny little movie the whole family can enjoy together. (Except maybe for the weird sketching scene.) Hedges doesn’t quite achieve his ambition of making the next magical family-friendly classic, but that was a pretty tall order.

I won’t recommend you stop what you’re doing to run out and grab this one. However, if you were on the fence about checking this film out when it was in theaters, make sure you grab the fine-looking Blu-ray. For better (but mostly for worse), the special features do a better job of conveying the movie’s message than the feature film.