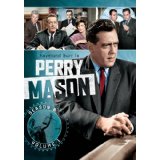 Erle Stanley Gardner wrote crime fiction, and while many of his 100 or so works are unknown to most of us, he created a character who has become as identified with criminal lawyers as any other in fiction. It was in these crime novels that Perry Mason first faced a courtroom. He developed a style where he would investigate these terrible crimes his clients were on trial for. He would find the real killer, and in what has become a Hollywood cliché, reveal his findings in a crucial moment during the trial. While we may not remember the novels, we all remember the man in the persona of Raymond Burr.  Burr had a commanding presence on our screens and enjoyed a well-deserved 11-year run as the clever lawyer. What makes this run so amazing is that the show followed pretty much the same pattern the entire time. We always know what’s going to happen, but we wait eagerly for that gotcha moment when Perry faces the witness on the stand. We know when he’s got the guy squarely in his sights, and we can’t sit still waiting for him to pull the trigger. OK, so maybe that’s a little over the top, but so was Perry Mason. From the moment you heard that distinctive theme, the stage was set. To say that Perry Mason defined the lawyer show for decades would be an understatement. Folks like Matlock and shows like The Practice are strikingly similar to Perry Mason. If you haven’t checked this show out, this is your chance. See where it all began.

Here you’ll find the first 15 episodes of the 8th season on four discs. It’s Romeo and Juliet all over again in The Case Of The Paper Bullets. Two rival political families end up at the center of a murder investigation when their children fall in love. Who killed Romeo? Mike Connors stars as Joe Kelly who’s covering for the absent Mason in The Case Of The Bullied Bowler. A bowling ally and a disgruntled mother-in-law complicate Kelly’s life here. Mason goes all the way to Switzerland for The Case Of A Place Called Midnight. There he gets involved in an international situation. Della’s cousin is in town and gets into some trouble looking for Hollywood fame and fortune. It’s The Case Of The Blonde Bonanza. Who else can she turn for help, but Perry?

This was another milestone season for Perry Mason. Raymond Burr was unhappy with his contract negotiations and was prepared to leave the show. Mike Connors was brought in to replace Burr during the dispute. Plans were already underway to have Burr leave the show for good while Connors took over as Joe Kelly. Not sure how the show’s title would work, but the supporting cast would remain. Burr eventually gave in and stayed four more years. Connors would be rewarded with his own series Mannix. Richard Donnor would direct the season’s first episode in one of his earliest gigs. This set has everything: ”An unsigned letter, an odd coin neither of us ever knew existed, two-minute wait under a street sign, phone ringing in a certain downtown phone booth, sounds like a spy melodrama. I suggest you spend the afternoon shopping for a trench coat.”

Gino Sassani is a member of the Southeastern Film Critic's Association (SEFCA). He is a film and television critic based in Tampa, Florida. He's also the Senior Editor here at Upcomingdiscs. Gino started reviewing films in the early 1990's as a segment of his local television show Focus. He's an award-winning recording artist for Omega Records. Gino is currently working on his 8th album Merchants & Mercenaries. Gino took over Upcomingdiscs Dec 1, 2008. He works out of a home theater he calls The Reel World. Favorite films: The Godfather, The Godfather Part II, The Body Snatcher (Val Lewton film with Karloff and Lugosi, not the pod people film), Unforgiven, Gladiator, The Lion King, Jaws, Son Of Frankenstein, The Good, The Bad And The Ugly, and Monsters, Inc.
Asylum (I Want To Be A Gangster) Mannix – The Final Season