The Game – The Fifth Season

Posted in: Disc Reviews by William O'Donnell on December 4th, 2012 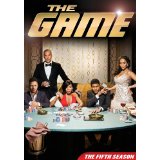 Stemming from a backdoor pilot episode within the series Girlfriends, The Game is a comedy series about a woman (played by Tia Mowry Hardict) who gave up her career as a doctor in light of the success of her boyfriend’s being a star athlete (this is the first pang of misogyny, with more to come). This is the show’s fifth season, which is its second after being canceled by CW and revived by BET.

Most of the male, lead characters in this show are current or former members of a fictional professional football team called the San Diego Sabers. In fact, most of them seem to have been cut from the team for one reason or another but coast day to day on their fame and burn through their riches. The first few episodes do siphon some comedy from this situation when the character Derwin Davis (played by Pooch Hall, which is a perfect name for a baseball player…but that has nothing to do with anything) has to sell off his cars, home and learns the true cost of all things he used to buy while abiding with the “baller’s code.” Suddenly a $900 bottle of champagne is no longer casually sent to friend’s tables at the bar.

I can’t exactly tell what this series is truly about; either seeing intelligent young women be trod upon, or successful young men receiving little to no comeuppance for their arrogance. The first case study is the aforementioned doctor who becomes a homemaker because her boyfriend (who has cheated on her and purposefully puppeteers her attempt to start a new job) is on a professional football team. She keeps reminded him of this fact but there seems to be no real payoff for such reminders.

The second, and grossest example, is when Jason Pitts (played by Coby Bell) goes on a egotistical rant that causes a bartender to lose her job. Does he try to rectify this? Sure, he finds the bartender on the street and then offers to take her to a cheap restaurant as an apology. Such a cheap stunt surely warrants a slap in the face doesn’t it? Apparently not. Instead we get a sudden cut to the next scene where we see the couple in Mexico just after they got married. That’s right. An egomaniac costs a woman her job and his reward is he wins her heart. I’d be weeping if this weren’t grounds for fits of screaming laughter at the show’s expense.

Speaking of hysterics, I have to hand it to whichever writer decided to name the bartender “Chardonnay.” That is pure comic gold that the other characters do not hesitate to acknowledge. I’m kind of hoping it’s not a nod to the fact that singer/actress Brandy portrays said bartender, thus making it a drink pun…because that makes it feel not as clever.

Widescreen 16:9. Every scene is lit unnaturally bright, which is common for sitcoms…though this show leans towards the dramatic more often than not. That being said, the picture quality is decently clear. This Californian settings could have done with more colours that pop and a greater contrast between black and white tones but that’s more an issue to take up with the set decorators and not the DVD distributors.

Dolby Digital 5.1 and 2.0 are available. The opening sequence is the best looking and sounding part. Beyond that, the sound is acceptably clear for both dialogue and occcasional music.

There is a laughtrack and it is badly mixed with the rest of the sounds. It’s disruptive and could not sound more canned if it tried.

Subtitles in English only.

Highlight Reel: The main “reel” features key moments from the entire season, summing it up in about 7 minutes or so. The plus-side to this reel is getting to see some of the genuinely deep moments that were within the stories; brief and uncommon as said moments may have been.

Included on the highlight reel page is a section for the main characters (at least, those that appear on the DVD box art. They aren’t officially listed so they may be Easter Eggs. If you highlight a playing card on the menu you’ll get the option of seeing “Touchdowns” and “Fumbles” for each character. This translates to: the highs and lows of each characters story arc for the season…and some random groans and cheers for good measure.

Deleted Scenes: Select episodes have extra scenes throughout all 3 discs. Nothing special here.

Five seasons in and this show doesn’t seem to have blossomed into whatever it was trying to be. For every step forward it makes by showing potential, it takes two or three backwards with cringe inducing misogyny, cliché situations and unlikeable characters. The existance of a laugh track made me decide this was a comedy, therefore that’s what I’ll categorise it as.

Help Out Upcomingdiscs With Your Amazon Purchases Heaven’s Door