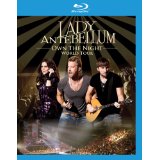 Coming off the staggering crossover success of the world’s loveliest and catchiest booty call song — “It’s a quarter after one, I’m a little drunk/ And I need you now” — Lady Antebellum were the kings (and queen) of the country pop world. (Non-Taylor Swift division, of course.) That means the pressure was on for their follow-up third album. Though Own the Night brought the band a more modest truckload of critical and commercial kudos than Need You Now, it also inspired the raucous world tour captured on this Blu-ray, a must-have for any Lady A fan.

Lady Antebellum: Own the Night World Tour finds lead singers Charles Kelley and Hillary Scott along with guitar/piano/mandolin player and background vocalist Dave Haywood in Little Rock during the final days of their global trek earlier this year.

You can immediately tell this isn’t going to be a typical concert Blu-ray. Instead of jumping straight into the music, the film begins with Lady Antebellum and their fellow band members backstage. They’re huddled in a circle with their hands together in the middle like a Little League team before everyone cheesily yells, “Let’s bring a lot of rock to Little Rock!” We then follow Kelley, Scott and Haywood as they harmonize their way to the bowels of the stage, where they will soon be raised to the toe-tapping strains of show-opener “We Owned the Night” and the roar of an adoring live crowd.

The incredibly agreeable country rockers — unlike some of their contemporaries, their music doesn’t overtly mention drinkin’, fightin’ or screwin’ — really know how to put on a dynamic live show. Despite having spent months on the road, their energy is infectious and unwavering.

Besides “We Owned the Night”, I really enjoyed the crowd sing-along in “Stars Tonight”, the peak of Kelley and Scott’s stage-only sexual chemistry during “Just a Kiss” (they’re each married to other people), the way they brought up an understandably terrified little girl to sing “American Honey”, the spare “Hello World” (with Kelley toning down his rock star posturing), the acapella intro for “I Run To You” (probably my favorite Lady A song), and the slightly re-worked “Need You Now.” The concert is edited in a way that gives Kelley, Scott and Haywood pretty equal camera time, with Haywood getting his moment in the sun during a guitar solo atop a red piano.

Since Lady Antebellum only have three albums worth of material to draw from for their live show, the Blu-ray packs in a ton of behind-the-scenes goodies between almost every song. All of it will be treasured by fans of the band, but only some of it works in terms of the concert presentation. For example, I loved the footage of Lady Antebellum performing at a gas station during their less glamorous early days and hearing themselves on the radio for the first time before we saw their live performance of debut single “Love Don’t Live Here.” Unfortunately, other clips — like the self-congratulatory video of the band hanging out with celebrities at their Staples Center show in Los Angeles — felt like they were shoehorned in.

Don’t get me wrong: Lady Antebellum still appear to be totally grateful and completely in awe of their great fortune. I also enjoyed hearing them discuss their road to success. I just found myself wishing some of this stuff had been relegated to the Special Features so we could get back to the show.

1. We Owned the Night

5. Dancin’ Away with My Heart

Lady Antebellum: Own the Night World Tour is presented in an aspect ratio of 1.78:1. The 1080i image is arrived at with an AVC MPEG-4 codec at an average of 29 mbps. The film opens with very basic, almost grungy black & white backstage footage, which I suppose is meant to make those moments feel candid or more intimate. (Like a home movie.)

Turns out the real purpose may have been to make the main concert footage look sensational by comparison. Once Kelley, Scott and Haywood emerge on stage, the effect is similar to Dorothy Gale arriving in Oz. The picture is that sharp and the colors are that vivid. (Witness Scott’s sparkly purple jacket and matching eye shadow.) I was particularly dazzled by the clarity in the straight-on medium shots of the band on stage, which made it seem I was seeing them in person.

The DTS-HD Master Audio 5.1 track initially seems a bit too aggressive on the bottom end thanks to the thumping bass and (especially) drums on “We Owned the Night.” Once the show settles in, it becomes clear there is plenty of room on this track for the power you’d expect from a live concert without sacrificing the group’s signature harmonies. (Notably on display during that intro for “I Run to You.”) In short, Lady Antebellum’s vocals sound as good as they do on the airwaves they’ve dominated these past few years. Most importantly, there is plenty of crowd and ambient noise — and the music hasn’t been scrubbed down in favor of more audible vocals — which gives home viewers a more authentic live show experience. You also have the option of listening to the show in LPCM Stereo.

Bonus Tracks: Includes a backstage cover of OneRepublic’s “Good Life” (4:14), as well as stage performances of “Love’s Lookin’ Good on You” (3:23) from their debut album, “Love This Pain” (4:56), where Kelley calls attention to the cameras filming the concert, and a quick cover of Aerosmith’s “Sweet Emotion” (2:48).

The real attraction is a performance of “Black Water” (8:18), which features footage of Kelley singing Hootie and the Blowfish’s “Hold My Hand” as a youngster before former Hootie frontman — and Lady Antebellum opening act — Darius Rucker joins the band on stage for a rollicking jam session. Fellow opening act Thompson Square also get in on the fun. Unfortunately, the bonus tracks do not feature a Play All option.

What Goes Down Doesn’t Always Come Up: (1:27) Remember how I mentioned that Lady Antebellum emerge from the bottom of the stage at the start of each show? Well, this fun little feature includes footage from the San Jose show where their lift got stuck and Kelley, Scott and Haywood had to perform and climb out of their hole at the same time. Funny stuff.

What Happens Backstage: (8:35) A peek at a backstage meet-and-greet/Q&A with Lady Antebellum. They politely answer questions from fans and perform quick versions of “I Run to You”, “American Honey” and “Singing Me Home.”

Just like the band it chronicles, Lady Antebellum: Own the Night World Tour is more dynamic than the average concert film without doing anything too radical. Unless you’ve absolutely decided that you have no use for country music or are actively trying to dislike this massively popular group, this show is pretty hard to resist.

The Blu-ray looks and sounds great while featuring a treasure trove of behind-the-scenes bonus material, even if it’s not technically part of the “Special Features.” I said earlier that this is a must-have for fans, but I also recommend it for the more casual Lady A fans — like myself — in your life.