Posted in: Disc Reviews by Michael Durr on December 9th, 2012 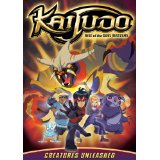 One of the traps as a kid I never really got into was the art of the Magic card game. Sure, the cards were pretty to look at but the actual game behind it or the similar pretenders never seemed to interest me. Of course, these card games never quite stay card games, they become toys and often cartoon series. Today, I get one of those so called card games which have spawned a series. Its name is Kaijudo and the review is next on the Hub.

There is a rip in the space-time continuum and a large rhino-like creature jumps out to attack a couple who have decided to take a stroll. Out of nowhere, Hector Chavez, a duel master comes to the scene and calls his creature, Gilaflame the Assaulter. The two creatures start to fight with Gilaflame gaining the upper hand and driving the rhino-like monster back into the rip and sealing it once again. These rips are becoming far too frequent. In the distance, a man with a blue claw watches.

Ray Okamato and his grandfather sit at the kitchen table discuss school and life. As he goes to departs for bed, we see his sketch book and realize that he has drawn the same rhino-like creature that we saw earlier. The next morning, Ray wakes up and after a brief talk with his mother about bullies, goes to school. There at school, we meet Allie Underhill, a girl who gets a lot of attention.

Allie is about to have lunch with another friend, Gabriel Wallace when a bully named Carny starts harassing them. Ray comes up and this soon this becomes an altercation as the tension escalates. The fight is ready to take place elsewhere when seemingly out of Ray’s sketch book and powered by his green medallion, the Rhino-like creature from earlier appears. The creature scares everyone but Hector Chavez soon appears on the scene to take it on.

Out of the shadows, the man with the blue claw is revealed to be the Choten. He also is in command of a creature known as Aqua Seneschal. The rhino, now identified as the Rumbling Terrasaur is soon contained by the Choten and his assistant, Alakshmi and her puppet creature, Razorkinder. Soon, the three friends, Ray, Allie and Gabriel are thrust into a world to learn the teachings of Kaijudo and how to become Duelmasters. They each have gifts but will have to work together to keep the world safe from evil.

To say I was bit underwhelmed by this show from the outset was an understatement. Basically, you have three kids, two of which border on completely useless (and look like a cheap way to make sure all demographics are accounted for) and a bunch of so called Duelmasters that do not touch the creatures in fear of cooties I guess until Ray and the rest come along and treat them with kindness and respect. Some masters. It makes one wonder how they came in control of the monsters in the first place to begin with.

The evil group led by the Choten do not exactly strike fear into the protagonist’s hearts either nor are they all that different from Duelmasters on the other side, just a little more savage. I guess that’s the hardest part for me, I get that Ray and his friends are good but the rest of the good are either snobby or bumbling fools. The only positive thing I can say about the experience is that the voice acting is superb. Lots of great voices including Phil LaMarr, John Dimaggio, Grey DeLisle and Oded Fehr are represented here.

The video is in 1.78:1 Widescreen presentation. For a newer television cartoon, I was kinda disappointed mostly by the backgrounds. I have watched a lot of cartoons granted, and usually backgrounds are the first place that most toons tend to cut back on for obvious reasons. But here the characters and creatures (which are decent but not great) are thrown against the plainest backgrounds known to cartoon kind. It just never draws me in and worse yet I feel like I am left without a quality product.

For the audio portion, we get a 5.1 English Dolby Digital track. It is a fairly decent track full of flavor and reasonably intense fighting scenes. Dialog is strong and clear which allows the listener to see and hear the numerous monsters and find their favorites. Sound effects are fairly numerous but this is by no means exceptional either. It does the job, but nobody is going to remember it unfortunately.

Kaijudo: Rise of the Duel Masters is almost done with its first season. It appears like it will probably continue as long as there is interest. Personally, it did not resonate with me and felt too juvenile for its own good. Characters are merely thrown in just for their demographics or to fill a check mark on their socially acceptable list. The antagonists have a hard time of seeing all that more evil than the good Duelmasters and if it was not the creatures there would hardly be anything interesting in this show at all.

The disc is equally uninteresting. The video is incredibly bland and the sound is mostly average (maybe a touch above). The two extras (and a slipcover) are basic and I would be surprised if anybody would really miss them if they were not there. I am not a big fan of these 4-5 episode sets and know that a full season of episodes is the much better way to go. But for those who like the card game, they might find some interest. However, I give no recommendation to the show and hope these fine voice actors find a much better place to show their craft.

Michael Durr has been reviewing movies for the better part of fifteen years now. He primarily enjoys thrillers, sci-fi, animation and even a little courtroom drama. His favorite films include Escape from New York, the Goonies and anything with Alyssa Milano. When he’s not praising Kurt Russell as the greatest actor of our time or scratching his head over a David Lynch flick, he’s spending time at home in Texas with his lovely wife, Lori and his amazing son. How they put up with him is a mystery, but even Basil Rathbone doesn’t have the time to solve that one.
Lady Antebellum: Own the Night World Tour (Blu-ray) Duck Dynasty: Season 1