Posted in: No Huddle by Archive Authors on December 18th, 2012 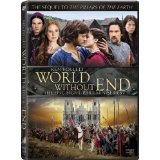 Ken Follett has written many historical novels from many periods such as World War II and the Hundred Years War. World Without End is part of the latter. It is a sequel to Pillars of the Earth. Both have been made into mini-series. World Without End takes place 157 years after Pillars and features descendants from the first book. It was broadcast in the USA, UK and Canada and is now available on DVD.

Kingsbridge is the fictional town in England which all the events revolve around. It begins in 1327 after King Edward II loses a brutal civil war to his French wife, Queen Isabella. Isabella crowns her son Edward the new king. There are characters from every level of medieval society and over eight episodes dozens of individuals have a major impact on the story. I will say at the outset that much of the mini-series plays as an old-fashioned soap opera. Heroes and heroines are at odds with some of the blackest and most unsavory of villains. Some of the villains are in sheep’s clothing, or in this case, cleric’s robes. Nearly every kind of treachery is displayed from husbands kicking wives down stairs, sister poisoning brother, brother sword-fighting brother, father raping daughter, and, of course, the rich and powerful subjugating the poor into lives of endless suffering. There is the Hundred Years War and then the ultimate plague, The Black Death.

Through all the suffering some loving goes on (not to mention plenty more rapes). In the large cast of characters, the two lovers who demonstrate relentlessly their nobility and goodness are Merthin and Caris. They are in love early on but are constantly torn apart for long periods by large scale events in England, France and Italy. They are played by handsome young actors Tom Weston-Jones and Charlotte Riley. Godwyn is an older cousin of Caris who is a monk who eventually maneuvers to oversee the priory after rigging an election. This seemingly pious cleric and his pleasant mother conspire to an endless string of contemptible and odious acts. They are played by Rupert Evans and Cynthia Nixon (Sex and the City).

There are actually very few characters in this epic that don’t stoop to disgusting and horrific acts. Another prime culprit is Merthin’s brother, Ralph (Oliver Jackson-Cohen) who lets the injustice of his father’s wrongful hanging poison his soul. His deeds become more loathsome and corrupt as the series progresses. Another actor who I don’t see enough any more is Miranda Richardson, who is a welcome addition as Mother Cecelia who frequently gives support to Caris as they fight evil queens, kings, knights and monks.

The epic’s conclusion revolves around the secret a wounded knight is harboring from the beginning to the end. Sir Thomas Langley (Ben Chaplin) seeks refuge in the priory and slowly finds serenity and peace there but is more and more compelled to come to the aid of the oppressed. It is his secret that brings this wildly overblown entertainment to its conclusion. It may be wildly out of control and in bad taste at times, but it is rarely boring (which is rare for a costumed drama). The extras also include a documentary making-of segment. It includes the author’s strong approval even though major changes had been made from his book. It was produced by the brothers Ridley and Tony Scott, both world famous directors in their own right. Tony recently made news for his unexpected suicide. They gave directing reigns to Michael Canton Jones (Rob Roy) who handled all eight episodes personally.

This was one of the worst times in human history, yet there are times when we wish we were there. It is an uneven endeavor that veers from crass to class, but I’ll give it a pass.