Posted in: Disc Reviews by Brent Lorentson on December 18th, 2012 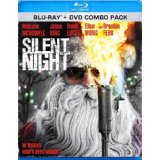 It’s that time of year when the studios enjoy churning out their holiday films to help get people into the holly jolly spirit of things.  Thankfully for us bah-humbuggers out there, studios also release films that kick dirt in the face of the holiday season.  Silent Night isn’t the film to play after a night of caroling while trimming the tree and listening to the fire crackle.  Instead this is the film to watch with a six pack and a group of friends to just blow off some steam.

Imagine if Santa had a list, but instead of it being filled with the names of boys and girls who have been good, it had the names of all those who have been naughty.  Sure we would expect Santa to give lumps of coal to those who have misbehaved, but Silent Night delivers a Santa who punishes the bad by taking their lives.  The film is a very loose remake of  Silent Night,Deadly Night; for me this will always be a holiday classic, and for those who are fans of B cinema but somehow missed this title, it’s one worth hunting down and checking out.  As for the current film, I have to say I was surprised that I actually had fun watching it.

It all begins on Christmas Eve in a small mid-western town as we see a man in a Santa costume kill a man for sleeping with another man’s wife.  We don’t know for sure this is the reason behind the killing, but it seems to be the only option we are presented with.  While the original focused all the attention on the homicidal Santa, Silent Night instead follows Aubrey Bradimore (Jaime King, a young deputy who is called into work the first Christmas since her husband died.  She’s a good-natured woman trying to follow in the footsteps of her father who is a retired officer, but she’s just not sure she has what it takes to make it with the force.

One by one bodies pile up around town, “naughty” victims ranging from a spoiled teenager, a small time porn producer, even to a priest that seems to have lost his way.  I enjoyed the idea that this town, like many small towns, is filled with many skeletons in the closet, and the notion of having a Santa of urban folklore punishing people is fun.  The fact the film manages to offer up a few imaginative kills and moves along at a nice pace with very few moments that drag was a welcome surprise.  Overall, though, the story doesn’t offer up any twists and instead goes through the motions of adding up a body count as our hero closes in on confronting the killer.

Where my feelings for the film start to waver falls onto the performance of Malcolm McDowell; it’s not that his performance was bad as the town sheriff; it simply was a bit too over the top.  It’s great seeing him having fun with the role and giving so much to the character, but since the rest of the cast plays down their parts, his scenes can feel a bit jarring at times.

As the film moves along I was enjoying the fact that in this version the identity of the killer was being left a mystery and that knowing he was simply hunting down the naughty was part of the fun.  Where the film takes a misstep that really bugged me was that they felt the need to explain who and why our killer is doing what he is doing.  This happens all the time in movies, so why does it matter this time around?  Well, they give the back story in a flashback after the final fight, and it does absolutely nothing for the film but cause it to backpedal.  It doesn’t add to the story, and for me this tacked-on scene ruined the momentum the film had going for it.  The movie still has its moments, and I wouldn’t give it a lump of coal, but it’s better watched at night with a belly full of eggnog and a cautious eye on the chimney for those viewers who’ve been naughty this year.

Brent Lorentson is a horror writer and film critic based out of Tampa, Florida. With a BA in Digital Film, he co-wrote and co-directed Scavenger Hunt. His short stories have appeared in various horror anthologies. In 2019 his short script Fertile Blood will be a part of the anthology horror film Slumber Party. He is currently working on his first novel A Dark and Secret Place set to be released in late 2019. Favorite Films: Taxi Driver, Fight Club, I Saw the Devil, The Wild Bunch, Dawn of the Dead, A Clockwork Orange, Pulp Fiction, Heathers, The Monster Squad, and High Fidelity.
Ken Follett’s World Without End Trouble With the Curve (Blu-ray)