Posted in: Disc Reviews by Michael Durr on December 17th, 2012 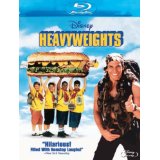 Most Disney live-action kid’s films do not have a kind memory in my heart. They feel contrived, full of soft characters and contain tons of bad comedy. They also proceed to force upon the audience some kind of weak message about morals and attempt to make us feel better about ourselves. This never works. However, today I have a shining light in the sea of bad Disney live-efforts and that film is the 1995 cult classic, Heavyweights.

The clock counts away the seconds until 3:00pm. The bell rings, it is the last day of school. Gerry Garner (played by Aaron Schwartz) misses his school bus and tries to run after it to no avail. He eventually gets home through some mishaps and his parents (played by Jeffery Tambor and Nancy Ringham) call him into the living room. There Gerry runs into a gentleman named Roger Johnson (played by Tim Blake Nelson).

Gerry’s parents along with Roger sit him down to watch a video. Basically, they want to send him to camp. The place is called Camp Hope and the owners, Harvey and Alice Bushkin (played by Jerry Stiller and Anne Meara) talk about all of the things that a kid can do there for the summer. However, it becomes painfully aware that this is not a normal summer camp. It is in fact, a fat camp. Gerry is furious (rightfully so) and refuses to go on this little adventure.

So, Gerry is off on the next plane to Camp Hope. On the plane, he meets Roy (played by Kenan Thompson), another kid who happens to be going. Once the two are off the plane, Roy introduces Gerry to the rest of the bunch. They are soon greeted by a bus driven by Pat Finley (played by Tom McGowan), an elder camp counselor (he was also in the promotional video). As they get on board, they drive off to Camp Hope. Everything seems great at that moment, but things are about to change.

Once the group of kids gets off the bus, they are introduced to one of the other counselors, Tim (played by Paul Feig) and the brand new school nurse, Julie (played by Leah Lail). The kids are taken to Chipmunk Cabin where Gerry makes some more new friends. One in particular is Josh (played by Shaun Weiss), a camp legend. Gerry reveals he stashed some food away in his clothes but soon learns that everybody has done the same thing as they reveal their secret cache of sweets and treats.

The kids decide to go play on the Blob, a giant inflatable water toy that is able to send people 15 feet into the air and down into the lake. Life seems grand. Later that night, they get the yearly welcome from Alice and Harvey Bushkin. However, this is way more somber. The kids soon learn that the two owners have filed for bankruptcy and that the new owner is a man named Tony Perkis (played by Ben Stiller), a fitness guru. As shouts of “I wanna go home” echo through the building, Tony reveals his master plan.

Of course, the master plan being that the camp is now a real fat camp and that Tony is using it as an excuse for an infomercial where he will be able to sell a ton of videos on weight loss. I remember seeing a blurb about this movie in the mid nineties and then never heard from it again until it showed up in my review pile. This movie is a lot better than I thought it would be and is actually really darn funny. It all starts with a great kid cast and then we fill out with a bunch of good adult parts and one amazing villain.

The kids are really a well rounded group. They all play off each extraordinary well and know when to feed off each other’s punch lines. Adults such as Paul Feig , Tom Hodges (who plays Lars, one of Tony’s henchmen) and Leah Lail (a real cutie too) are there also to add into the fun and provide solid anchors for crucial scenes. Then of course, there is Ben Stiller who does the characterization that he would master nine years later in the form of White Goodman for the movie Dodgeball.

Ben is perfect as Tony Perkis who seems to be a form of every bad television fitness personality from the eighties and nineties. He plays excellent fodder for the kids and despite being a young actor at the time of this movie comes across as professional and stoic as he is today. The film does not have too many faults; most of them are created by the Disney feel. But this is a rare find among most Disney live action films of the era. It is a film that is meant to be enjoyed by all audiences.

The movie has gained appreciation over time I think in part to the fact that if somebody attempted to make it today, it would be over ran with Michele Obama references and the fun would be completely stripped away. This film was made for everybody who was ever picked on and then eventually found friends who accepted them for the way they truly are. The film also does this without the hokey tags that you commonly see in so many kids films.

The video is in 1.85 Widescreen presentation in 1080P. The film is drawing in pretty close on twenty years old and outside of the some of the dated hair styles, this movie looks really darn good. Colors are strong and details are actually pretty easy to find in close ups. The film was actually done at Camp Pinnacle in Henderson, North Carolina and really shows off the beautiful Carolina landscape. There are a few defects in the print, but it is more age and preservation than anything else.

For the audio portion, we get a 5.1 English DTS-HD track (5.1 Dolby Digital Spanish track also included). Dialog is wonderfully strong & clear and I was actually quite impressed with how well the music blended with the film rather than what we see in a lot of films these days. (Music and sound effects overpowering it) Surrounds are used frequently and the soundfield is actually quite dynamic. This is much unexpected but very welcome. English, French and Spanish Subtitles are also available.

The sad thing about this movie is that it was absolutely butchered by so called “critics” and box office receipts did it absolutely no favors in turn. Seventeen million is pretty awful even by 1995 standards. However, over time the film has gained a cult following and I am glad to say that after seeing the blu-ray today, I am a new fan as well. It is well-written, acted and everybody in the cast seems to be up to the task of making sure everybody gets equal laughs. It also helps that Ben Stiller does an awesome job as Tony Perkis.

Kudos also goes to Disney for making a blu-ray that is crammed with wonderful technical properties. The video is great, the sound is great, and the extras are some of the best I have ever seen. This is how all blu-rays should be made, and this gets a great recommendation especially to those or those who have loved ones that were picked on incessantly as a kid. It is a great film, and hopefully with this blu-ray picks up even more fans. Enjoy children; this is a rare gem in a minefield of duds.

Michael Durr has been reviewing movies for the better part of fifteen years now. He primarily enjoys thrillers, sci-fi, animation and even a little courtroom drama. His favorite films include Escape from New York, the Goonies and anything with Alyssa Milano. When he’s not praising Kurt Russell as the greatest actor of our time or scratching his head over a David Lynch flick, he’s spending time at home in Texas with his lovely wife, Lori and his amazing son. How they put up with him is a mystery, but even Basil Rathbone doesn’t have the time to solve that one.
Get the Christmas Blu’s with Oppo’s BDP-103 Ken Follett’s World Without End