Posted in: No Huddle by Jeremy Butler on January 7th, 2013 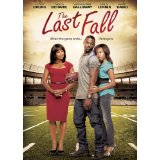 “78% of all professional football players are divorced, bankrupt, or unemployed two years after leaving the game.”

Now here’s a movie with quality subject matter. A film that addresses the consequences athletes face when they live for today’s instead of tomorrow’s satisfaction. Of course it is wrapped up in the bow of a romance theme, but the principle still holds. The idea of the two plots at first may be perceived as bad mixture like oil and water; however, after watching the two will be viewed more complementary like vanilla and chocolate swirl.

Kyle Bishop is a NFL pro wide receiver who has spent years living out of a suitcase, bouncing from city to city and from team to team until reaching the inevitable conclusion: never having really made a lasting impression, he is left with no team prospects. Like many players before him, Kyle hasn’t thought ahead, assuming there would always be another prospect, and has no cash reserve saved up. After a visit from his agent where he is told that he may have to embrace the idea of life after football and years of living above his means, he is faced with repossession and swimming in debt with no hope of digging himself out.

Soon after cleaning out the locker of his latest team, Kyle leaves and heads back home to Los Angles and to his family. Not long after his arrival, the tension between himself and his family can be felt, and Kyle is forced to deal with the issues that he left behind such as his parents’ divorce, his mother moving on with her life, and his father’s illness. Within weeks of returning home, he has a chance meeting with an old flame Faith (Nicole Beharie), the one he left behind to pursue his dream. Apprehensive at first, Faith soon warms to him and the two rekindle their relationship; their bliss is not without the complications of their circumstances; Faith is now a single mother of a son, and her son’s father is determine to repair their relationship after a past infidelity; and just as Kyle starting to adjust life without the game, an opportunity to play again presents itself.

It would seem that writer/director Matthew Cherry drew from his own background when developing the character of Kyle Bishop; a former wide receiver himself having played for Jacksonville and Cincinnati as well as Baltimore. The film marks Cherry’s writer and feature film directorial debut. Although I do believe that the overall message of the film does come across, I did have issues with how the story was underdeveloped in areas. For example, an existing conflict is hinted at between Kyle’s mother and sister, but the avenue is not really explored, and you’re left to assume that the issue was about the sister’s sexual orientation (or at least that’s what I assumed it to be about). The conclusion of the film may also leave the audience hanging, given it’s open-ended.

Tackling the role of a professional athlete on a downward spiral in his professional as well as his professional life is a big job, but thankfully Lance Gross had his long stint on Tyler Perry’s House of Payne to aid his performance. Gross is solid as Bishop, and there is definite chemistry between him and Beharie. For me, however, the best performance came from Keith David as Sydney Bishop, Kyle’s father. His speech about life and doing something for the love of it instead of obligation was tremendous, which is really saying something since it is David’s only real scene in the film.

The film brings light to a subject I constantly read about online and in the newspaper; how many professional athletes wind up declaring bankruptcy shortly after retiring and leaving the game behind. For the story to be told by a former player, that makes it all worthwhile.

Jeremy Butler is a film school graduate of the International Academy of Design and Technology. He is been writing for Upcomingdiscs since 2012; however, movies have played a big part of his life for much longer. Favorite genres include horror, science fiction/fantasy, and comedy. Favorite movies are V for Vendetta, Boondocks Saints, Kiss Kiss Bang Bang, and The Godfather.
Red Hook Summer (Blu-ray) Episodes – The Complete First & Second Seasons