Posted in: Disc Reviews by Brent Lorentson on January 7th, 2013 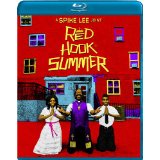 When it comes to writer/director Spike Lee, he seems to have a very polarizing effect on the people who watch his films.  I’d like to consider myself a fan of most of his work.  For me  Clockers, Summer of Sam, and The 25 Hour rank at the top of my list of favorites.  He’s a director with a very distinct style and voice that sets him apart from most filmmakers.  But it’s that voice of his that often times gets him in trouble, whether it is in the message of his films or oftentimes comments he makes (most notably his comments on Tarantino and Django Unchained). As for Red Hook Summer, I wasn’t sure what to think of it, hearing mixed reviews from the festival circuit.  For me when I heard this was supposed to be a unofficial follow-up to Do The Right Thing, I was already looking forward to checking this out.

When we first meet Flik Royale (newcomer Jules Brown) he’s in the back of the cab coming into Brooklyn for the first time with his face hidden behind his iPad 2 as he films everything.  Flik comes from a middle class family in Atlanta, so of course this move to spend the summer with his religious grandfather is more than just a simple culture shock.  At first it’s hard to sympathize with Flik simply because he comes off as nothing more than a spoiled brat, but as the film moves along I found myself warming up to him more and more.

The summer seems to be hopeless for Flik as it seems his grandfather Bishop Enoch (Clarke Peters from The Wire) plans to keep Flik hard at work while trying to convert him to the ways of Jesus Christ.  Clarke commands the screen even more so as he stands upon the pulpit in front of the followers of his church.  But as warm and compassionate as he may seem, even a man of the cloth can have a few skeletons in the closet.  I won’t reveal the flaw in his character, but upon re-watching the film and watching his character, Clarke makes it clear throughout that this is a man haunted by his past, and he is trying so desperately to right the wrong of his past.

For Flik things seem to turn around after meeting Chazz (Toni Lysaith), a neighborhood girl his age who also goes to the same church.  The heart of the film is in the friendship and relationship that develops between these two.   Their relationship is childish and innocent, but that’s how first loves are supposed to be when you’re young and you start fumbling around trying to understand how you feel about the opposite sex for the first time.

Sure, the plot is kind of thin, but what I came away with was wanting to see how this relationship develops between Flik and Chazz.  We know the reality that distance will most likely cause the two to move on and go their separate ways, but part of me holds out hope for these two and wants to see where they end up five years from now or even ten years from now.

Red Hook Summer is presented in an aspect ratio of 1.78:1 from its original aspect ratio of 1.85:1.  The 1080p image is arrived at with an AVC MPEG-4 codec at an average of 28 mbps.  For a film shot on digital, I was surprised how well the end product matched up against his previous Brooklyn-centric films.  Colors seem to pop on the screen in contrast to their often drab surroundings, whether it be Flik’s yellow shirt when he first arrives, or Bishop Enochs service robe, or the gangbangers sporting their red, it all comes to life on the screen.  For a film centered in the projects, this is a beautiful-looking film.

The DTS-HD Master Audio 5.1 is subtle but remains impressive.  Throughout the film the dialog is clear with simple added effects, mostly when Bishop Enoch is delivering his sermons where you get an echo effect.  But with the added background noise, it is subtle enough to allow a seamless immersion into the film.  And in any of the songs many moments occur where we hear Judith Hill sing; it sounds clear, soulful, and perfect for the tone of the film.

Spike Lee Commentary: This track offers us an insight to the origins of the film as well as many anecdotes about the making-of.  Usually when only one director is on the track it can be a bit dull and have many quiet spots, but not here.  Lee seems to know his audience is made up of aspiring film students and offers a comprehensive look into the making of process to the film.

Behind The Scenes: (27:30)  What we get here is close to half an hour of watching director Spike Lee at work directing the film.  A glimpse at how some of the key scenes were shot and how he interacts with the actors is interesting but not for everyone.

Music video: (4:04) The song is sung by Judith Hill, who wrote 10 of the songs that are in the film.  There was no mention of the title of this song, but the video is a mix of footage from the film and behind-the-scenes.

Seeing Lee getting back to filming something small and intimate was refreshing.  For me Spike is one of the few working writer/directors who is able to give each and every character a unique and interesting voice.  With Red Hook Summer we get to see a sweeter side of Spike Lee that I was honestly surprised and delighted to see he had in him.  Though this may not be his best film, for fans of his work this is one definitely worth checking out.

Brent Lorentson is a horror writer and film critic based out of Tampa, Florida. With a BA in Digital Film, he co-wrote and co-directed Scavenger Hunt. His short stories have appeared in various horror anthologies. In 2019 his short script Fertile Blood will be a part of the anthology horror film Slumber Party. He is currently working on his first novel A Dark and Secret Place set to be released in late 2019. Favorite Films: Taxi Driver, Fight Club, I Saw the Devil, The Wild Bunch, Dawn of the Dead, A Clockwork Orange, Pulp Fiction, Heathers, The Monster Squad, and High Fidelity.
Anger Management: Season One (Blu-ray) The Last Fall