Posted in: Disc Reviews by William O'Donnell on January 7th, 2013 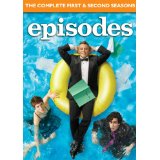 (I have covered the first season on this site already so this review shall begin with that one then segway into new write-up for Season 2):

A successful writing team, who also happen to be a married couple, are the creators of an award-winning show in the UK that has just completed after four seasons. An American network wishes to create a US version of the show. The couple are flown to LA, put up in a lavish mansion and are introduced to the Hollywood method of creating television…and it nearly destroys them.

Even before they arrive in LA, this pair begins sinking in a quagmire of big-time Hollywood lies and bluffs that drive them to losing their lead actor, a respected, elderly British man, in exchange for Matt LeBlanc, converting their program from the story of a headmaster at a boarding school to that of a handsome hockey coach who is chasing after a sexy librarian, and generally sacrificing all they hold dear (both creative and personally) in order to survive the shoot of a single pilot episode (which, by the way, seems to be the most arduous and lengthy studio shoot I have ever witnessed…it lasts the entire season of Episodes!).

This series feels like Extras with more grace under fire when becoming jaded with the film and TV industry, or Curb Your Enthusiasm with less belly-aching awkwardness. Stephen Mangan and Tamsin Greig are familiar faces to fans of BBC comedy, and handle the lead roles with the perfect amount of typically British wit and charm. Matt LeBlanc will raise a few eyebrows with his surprisingly decent performance as himself, albeit a presumably puffed up, manipulative jerk version of himself.

As this seven-episode (a number more familiar to those who watch British series’) progresses, the story arc becomes less about the troubles with dealing with American Tv producers and more about the relationships as major jealousies arise between the married writing duo. This sapped a lot of the fun out of the show. Hollywood can never take enough jabs and this show did not need a melodrama about potential infidelity to avoid giving it these knocks.

The writing team (whose marriage is now on the rocks) have fully accepted “Pucks” as their main project, and no longer seem to be begrudging the drastic changes that were made from when it was adapted from the UK version. This means the series’ (Episodes) focus is less about Hollywood being a dream-killing factory but more about the characters that are trying to function within such an environment.

Though many of the characters remain a bit two-dimensional, it is still entertaining to see them go through story arcs that are more about their feelings and personalities and not just how weird Hollywood can be (though, there is still ample jabs at Tinseltown). There is something a little bit sad about seeing our main couple become so readily accepting of their California lives. Season One thrived on how alien they felt, while Season Two has them looking down on their cohorts; not because of how strange they seem but because of how superior they feel they are at being big-shot Hollywood types. Their victories are not borne from retaining their British cynicism but rather in which hottie they can get physical with, or just how many insanely expensive gifts can they receive from Matt Leblanc.

All of the subplots tie in nicely to the creation of “Pucks.” Matt Leblanc is used nicely in such humorous sequences such as him trying to contact old Friends cast mates, his weight issue, and his spectacular mishandling of his stalker situation.

Widescreen 16:9. Every overly polished set, be it for the show or the shows within the show, all looks very clean and clear. The California sun does not bleach out or create an orange hue, like it does other programs.

English 5.1 Surround and 2.0 and Spanish 2.0 Stereo are available. The droll wit of our lead characters is not lost in this soundtrack. The theme song and it’s jazzy variations, are cleanly repeated throughout every single episode.

Virtually identical to the features that appeared on the release of Season One.

Photo Gallery: A very small handful of pics that allows us to see some crew amongst the cast members. Pretty useless.

Biographies: Simple bios of our lead cast. The same info that shows up in the first paragraph of IMDB or similar site.

This show is clearly designed to feel like a BBC series dwelling within an American setting somehow. It is a tad bit meta in that sense. Season Two makes this series feel more complete as the character arcs get to reach a satisfying end than what the emotional explosion we got at the end of Season One. A third season has been confirmed and the there is ample story left to be told for “Pucks” and its creators. I look forward to more.

The Last Fall The Life & Times of Tim: The Complete Third Season