Posted in: Disc Reviews by Jeremy Butler on January 10th, 2013 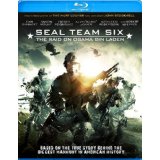 “Our enemy here is Al-Qaeda. It’s no secret they are not afraid to die. Neither are we. Tonight we know why we are here. We know who we are. Tonight we fight for something truly greater than ourselves. Tonight we ride.”

“It’s a good day to be a SEAL, good day to be an American.” Yes, I am aware that I’ve already opened with a film quote, but truthfully this film has quite a few good ones. Seal Team Six is the telling of Operation Geronimo, the successful mission that lead to the assassination of Al-Qaeda leader and engineer of the September 11th attack, Osama Bin Laden. I’m sure there are many that are thinking “why would a made-for-television film be made when on January 11, Zero Dark Thirty will premiere worldwide?” They may view the making of this film as a waste of money. They would be absolutely wrong.

The story of Seal Team Six is told from two fronts: The first follows Vivian Hollis (Kathleen Robertson, Boss), a senior counterterrorism analyst with the Central Intelligence Agency. She along with a team of analyst from the C.I.A.’s Special Activities Division and two operatives in the field  gather intelligence, attempting to gain definitive proof that Osama Bin Laden is holed up in a heavily guarded compound in Pakistan. Hollis spends much of the film battling her superiors as well as the White House. The White House desires actionable intelligence before sanctioning an operation, concerned with the potential fallout that will be created if it turns out Hollis is wrong. Hollis, on the other hand, believes unquestionably that the man she has dedicated ten years to hunting down is within the compound.

The second front follows the SEAL team that would execute the mission that will go down in history books as the most important mission in United States history. Before the mission of lifetime, this SEAL team was like so many others. They did their job, they risked their lives, and they missed their families.

During a routine transport mission, team leader “STUNNER” (Cam Gigandet, Priest), and his team are attacked and lose one of their own to a suicide bomber. Afterwards, tension runs high within the team. Cherry (Anson Mount, Hell on Wheels), a veteran soldier begins to question whether the loss of a man has hampered Stunner’s ability to effectively lead the unit. Their differences must be put aside as they prepare for the mission of their careers.

The film has a documentary vibe to it, as archival footage and principal filmmaking are intercut with debriefing interviews of Vivian Hollis, Stunner, and Cherry. Blending this type of style is normally very difficult, and yet it is excellently balanced here. If this were an actual documentary instead of a made-for-television movie, I’d recommend it for an Academy Award nomination. In its current state, however, though it is not fitting for the Academy Awards, it is at the very least worthy of nominations with any other awards ceremony. The first nomination should be for the musical score, because it was on the money for sure. It was somber at the right moments, added suspense during the raid, and was uplifting after mission success. Second for Robertson performance as Hollis; I really felt the authenticity she brought to the character, a woman who cannot rest until she brings the world’s most wanted terrorist to justice. The final nomination is a joint effort on the part of Gigandet and Mount; there was true chemistry in their dynamic as two teammates at odds, one a young leader on the rise and the other a seasoned veteran comfortable with his station.

Seal Team Six is presented an aspect ratio of 1.85:1. The 1080p image is arrived at with an AVC MPEG-4 codec. The film offers three separate perspectives: archival footage, principal filmmaking, and through the lens of surveillance cameras.  Image quality from the archival footage as well as the video surveillance angle appears grainy and blurry at times; however, I believe that to be intentional in order to lend authenticity. Examples of grainy picture come mainly from the video surveillance of the compound in the months before the raid. The blurriness can be attributed to on-the-go footage captured of the President as he makes his decision on whether to sanction the operations.  The principle film image is sharp. We’re talking a ton of detail and gritty texture here.

The DTS-HD Master Audio 5.1 track immerses you directly into the action. An explosion killing a member of the unit took me by surprise.  Dialog is clear and discernible. Surrounds are razor- sharp; listening closely you could actually count the number rounds being fired from each weapon.

The Making of Seal Team Six (17:30) – The film’s director John Stockwell, the screenwriter Kendall Lampkin, along with actor’s Cam Gigandet, Freddy Rodriguez, Kenneth Miller, and Robert Knepper take time out between filming to talk about the importance of the film and the need to stay true to the men who undertook the most dangerous and important mission in history.

A sound production, a great cast, impeccably researched, and superb opening credits depicting the manhunt process: I believe only one statement will thoroughly sum up this film, and it just so happens to appear in President Obama’s address after Operation Geronimo was successful….justice has been done.

Jeremy Butler is a film school graduate of the International Academy of Design and Technology. He is been writing for Upcomingdiscs since 2012; however, movies have played a big part of his life for much longer. Favorite genres include horror, science fiction/fantasy, and comedy. Favorite movies are V for Vendetta, Boondocks Saints, Kiss Kiss Bang Bang, and The Godfather.
Method To The Madness of Jerry Lewis House at the End of the Street (Blu-ray)