I Am Bruce Lee (Blu-ray) 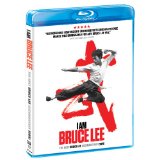 “The key to immortality is first living a life worth remembering.”

We’re now 40 years removed from Bruce Lee’s shocking death, and the martial arts superstar has unequivocally achieved pop culture immortality. I Am Bruce Lee examines the icon’s cultural and cinematic impact, as well as the many ways he has influenced current sports and music stars. The film already bills itself as “the best Bruce Lee documentary ever,” so I’m not really sure what you need me (or any other critic) for. I decided to go ahead and watch it anyway.

Director Pete McCormack (Facing Ali) covers every major moment of Lee’s big screen legacy while showing us the personal circumstances that led to each of them. Most of the vintage footage is comprised of stuff any serious Lee aficionado — or even a more casual fan — has already seen. (I fall in the “casual fan” category.) There are a few notable exceptions — including childhood pictures and footage of Lee training Hollywood actors in his own home — because McCormack secured the participation of Lee family members like widow Linda Lee Caldwell and daughter Shannon Lee.

Bruce Lee was born in San Franciscoin 1940, but was raised in China. According to the film, the Japanese occupation of his country during World War II resulted in a healthy contempt for bullies within Lee, who was a very successful child actor. (Something I didn’t know.) Bruce was also involved in many street fights with gang members, so his parents decided he should take up martial arts. The fact that Lee was one-fourth German, and not pure Chinese, also led to plenty of conflict and helped explain his intolerance for racial narrow-mindedness. Lee studied a street survival style of kung fu called Wing Chun. Unfortunately, the street fights didn’t stop and Lee’s family decided to send him to America in 1959.

He eventually settled in Seattle and enrolled at the University of Washington, where he met his future wife. (The film pauses to note how the interracial marriage raised more than a few eyebrows.) Lee was also teaching martial arts during this time. By 1964, he was living in Oakland and performing amazing stunts like his one-thumb pushup and the one-inch punch that attracted Hollywood’s attention. In 1966, Lee snagged the role of Kato in The Green Hornet, but achieved his greatest professional success after returning to Hong Kong as a major star and making films like The Big Boss and The Way of the Dragon. Those films led Hollywood to come calling again with a project called Enter the Dragon, but Lee died suddenly a month before the 1973 film’s release. (The documentary doesn’t give much weight to the wild conspiracy theories surrounding the death of a 32-year-old physical specimen, which will probably add more fuel to their conspiracy-making fire.)

As you’d expect from a film featuring the participation of Lee’s family, the documentary is mostly a loving tribute to the man and his myth. However, I Am Bruce Lee doesn’t totally shy away from the negative aspects of his personality. Everyone seems to be in agreement that Lee had a violent temper. Also, a lot of his so-called philosophy was plagiarized from other writers. (Or adapted brilliantly to serve Lee’s own worldview and inspire others, depending on who you ask.)

The film is at its strongest when it puts Lee’s accomplishments in their proper cultural context and examines the reasons behind his long-lasting impact. For example, it’s easy to see why Lee was so receptive to other ethnicities when you consider his upbringing and heritage. In turn, the film explores why other minorities — especially African Americans in the 1960s — gravitated toward this 137-pound dynamo of an underdog. (Lee’s victory over Chuck Norris in The Way of the Dragon was exactly as symbolic as it seemed.) According to director Reginald Hudlin (House Party), Lee’s style was steeped in rhythm and swagger — I wasn’t shocked to learn Lee was a cha cha champion in China — which reminded African Americans of another pop culture hero from that era: Muhammad Ali.

Although I enjoyed the part of the film debating whether Lee was a great fighter or merely a great entertainer, the portion dedicated to exploring if he was the “father of mixed martial arts” felt forced. A good chunk of the talking head interviews come courtesy of UFC president Dana White and a roster of current MMA stars. This entire section came off like a totally unnecessary ploy for making Lee relevant for contemporary sports fans.

The rest of the commentators are a mixed bag of Lee’s contemporaries (colleagues Dan Inosanto, Bob Wall and the wonderfully crotchety Gene LeBell), delightfully random stars (Mickey Rourke taking advantage of the fact that he’s allowed to curse; Ed “Al Bundy” O’Neill speaking thoughtfully and revealing he has a black belt in Jiu-Jitsu) and totally random celebrities. Although I could’ve done without Taboo of the Black Eyed Peas turning up to tell us how Lee influenced his performing style, I understand the idea was to show how the actor’s reach extended to the world of music. On the other hand, Kobe Bryant — hilariously credited as an “NBA All-Star/martial artist” — didn’t add anything to the conversation.

Of course, the most impactful commentary comes from the legend himself. I Am Bruce Lee nicely weaves in clips from Lee’s famous TV interview with Pierre Berton, as well as that first Hollywood screen test. They reveal the actor was as confident and captivating off screen as he was in his movies. This documentary reinforces that idea quite well and does a solid job of exploring why so many contemporary stars are eager to proclaim, “I am Bruce Lee.”

I Am Bruce Lee is presented in an aspect ratio of 1.78:1. The 1080p image is arrived at with an AVC MPEG-4 codec at an average of 28 mbps. As you can imagine, there’s quite a bit of archival footage from Lee’s films in the late ‘60s and early ‘70s, most of which actually looks really good. The real touchstones for the video quality, however, are the modern day talking head interviews, which provide nice, deep black levels and terrific sharpness during close-ups. This is a nice video presentation, especially when you consider the mixing of old and new footage.

The DTS-HD Master Audio 5.1 track is almost exclusively comprised of talking head interviews, which come through as clearly as anyone could hope for. Unfortunately, there’s not much in the way of immersion — which is to be expected — and the rear speakers only pop to life for brief snippets of music or when Lee is smacking someone around in one of his films.

Backyard Training — Bruce Lee’s Personal Films: (11:27) The fact that Lee trained Hollywood stars like Steve McQueen (extremely tough), James Coburn (very philosophical) and Kareem Abdul-Jabbar in his own home is covered in the main film, but we get more black and white home video footage of those sessions here. Pretty interesting stuff.

Bruce Lee in Action: (4:51) Action-packed reel of Bruce kicking butt in The Big Boss, Fist of Fury, The Way of the Dragon and Game of Death. Basically, it’s a slickly-produced YouTube click. It’s also lots of fun to watch.

Bruce Lee’s Hollywood Audition: (9:03) A strikingly handsome, 24-year-old Bruce Lee — wearing a suit and tie — sits down for his first Hollywood screen test in 1965. He was supposed to be auditioning for a TV series called Charlie Chan’s Number One Son, which was never made. However, the screen test helped him book his breakout role as Kato in The Green Hornet. We see clips from this screen test throughout the documentary, but it’s great to be able to watch it in full. Even as a young man, he was incredibly articulate and preternaturally self-assured.

I would actually recommend this documentary more to people (like me) who know of Bruce Lee, but aren’t intimately familiar with the details of his personal and professional life. I have a feeling Bruce Lee obsessives might complain about material that was left out or glossed over the same way you or I bitterly gripe about the film adaptation of a beloved book. (No matter how good the movie is, they always leave stuff out.)

I Am Bruce Lee sometimes veers off the road for a bit, but generally does a great job of examining a pop culture icon’s impact and long-lasting legacy.

Star Trek: The Next Generation – Season Two (Blu-ray) George Lopez: It’s Not Me, It’s You