30 Nights of Paranormal Activity With the Devil 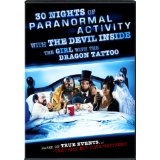 A mouthful of a title but still quite a unique and clever title, if only the movie was that interesting. Is it just me, or does it seem like a parody film is worthless unless the Wayans family is making it? From Craig Moss, the guy that brought you The 41 year old Virgin Who Knocked up Sarah Marshall and Felt Superbad about it comes another pointless parody with no sense of direction. Parody films reached as far back as the 1940’s with Abbott and Costello; they were made famous with such films as Spaceballs and Monty Python, and with A Haunted House at the box office now, they look to be carving out a place for themselves in cinema. However it only takes one to ruin the crop, and this could be it.

From the title, you can assess that the main films referenced in this movie are 30 days of Night, Paranormal Activity, The Devil Inside, and The Girl with the Dragon Tattoo. This cross-breed of genres uses the found-footage technique from Paranormal Activity to detail the story of Dana Rosti, a recently married woman who with her new family moves back to her family home. Dana hasn’t been back to her childhood home since her father murdered several people (including the entire cast of The Artist including the dog) in the basement. Not long after their arrival, the family begins to experience strange occurrences that threaten to destroy the entire family. Other films and television series referenced: Ghost Hunters, Ghost, American Beauty, The Bachelor, The Dark Knight Rises, and many more.

I don’t want to condemn the film too much, because it clearly wasn’t made for someone like me, but truthfully I didn’t enjoy a moment of this film. The jokes were cheesy and the acting was really bad across the board; I’m also aware that bad acting is a prerequisite for a parody film, but here it is just so over the top. The lead character of Dana Rosti seems to be nothing more than a carbon copy of Ana Faris’s character from the Scary Movie franchise. The jokes poke fun at everything from Scientology to Tebowing with none of them sustaining even a chuckle out of me.

I don’t know who the targeted audience for this film was, probably the fans of the films that make up the title of this movie; however, I don’t believe that the fans will take lightly the cheapening of the films that they have come to love, and truthfully that is all I got from this film. A parody is meant to poke fun at the plot holes of the original movie; here it was just an attempt to grab hold of anything that could be twisted to become remotely funny. I hope that the original parody 41 year old Virgin was a lot better and 30 Nights is simply a victim of the sequel curse. Otherwise this needs to be the last parody, because it’s not working.

Jeremy Butler is a film school graduate of the International Academy of Design and Technology. He is been writing for Upcomingdiscs since 2012; however, movies have played a big part of his life for much longer. Favorite genres include horror, science fiction/fantasy, and comedy. Favorite movies are V for Vendetta, Boondocks Saints, Kiss Kiss Bang Bang, and The Godfather.
Officer Down (Blu-ray) Taken 2 (Blu-ray)