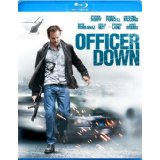 I see an Oscar nominee, an Emmy nominee, an actor who has carried two successful TV shows, and the bad guy from the highest-grossing movie of all time. In other words, I see more talent than you would ordinarily expect from a straight-to-DVD drama. Then again, I also see Soulja Boy, but he’s not the problem. Instead, Officer Down squanders a few fine performances and a solid premise due to some seriously (and unnecessarily) muddled storytelling.

Det. David Callahan (Stephen Dorff) may as well have “Dirty” in front of his name, but it’s not because he tears through bureaucratic red tape in his pursuit of justice; it’s because “Cal” always looks like he desperately needs a shower. Callahan is a former crooked cop/drug addict/philanderer who changed his bad boy ways after narrowly surviving a gun shot wound during a drug bust gone wrong. Cal never knew the identity of the man who saved his life until the Good Samaritan comes forward one year later.

The man is named Sergei (Zoran Radanovich) and he approaches Cal because he needs a favor. Sergei recently found his daughter Zhanna’s (AnnaLynne McCord) journal, which described her secret life as a stripper and the sexual assault she suffered. Sergei wants Cal to track down the attacker (Walton Goggins, Justified) Zhanna described in her journal and get revenge. As Cal embarks on this off-the-books mission, he has to dodge a hot-headed colleague (David Boreanaz, Angel and Bones), his concerned lieutenant (Stephen Lang, Avatar) and his jerky, image-obsessed captain (two-time Oscar nominee James Woods).

Officer Down takes some twists on the way to its bloody conclusion. But if the film’s story consisted solely of what I described in the previous two paragraphs, I think it could have been a thoroughly re-watchable and effective potboiler. Unfortunately, director Brian A. Miller (House of the Rising Sun) and screenwriter John Chase are obsessed with living in the past.

The flashback-happy film spends an inordinate amount of time either revisiting Cal’s shooting or showing us what a scumbag he used to be. It feels like every time Cal walks into a room, we’re treated to one of his many unseemly memories. (He was a terrible person…we get it!) On top of that, Dorff spends way too much of his screen time staring purposefully down at other people’s journals and materials as we — yep, you guessed it — flash back to the events described in what he’s reading.

It’s too bad because Dorff, looking more than ever like Kiefer Sutherland’s screw-up of a younger brother, is very good in this movie. Unlike some pretty boy actors who think growing stubble makes them look tough, Dorff is totally convincing as someone who is rough around the edges. The actor also shades his performance quite nicely in the present day scenes, playing a guy doing his best to be decent — particularly to his wife (Elisabeth Rohm) and daughter (Beatrice Miller) — while letting us know the bad boy part of him hasn’t totally gone away. I also enjoyed the idea of a homicide detective becoming so fed up with death that he considers crossing the line to prevent a killing before it happens.

The rest of the talented cast turns in decent work while being underutilized. Dominic Purcell (Prison Break) could’ve used a few more scenes, but feels appropriately dangerous as a strip club owner. McCord, in what amounts to an extended cameo, garners sympathy for her doomed character. Goggins doesn’t get to showcase his considerable skills until it’s much too late for us to care about his character. We only get hints at the paternal lieutenant Lang was trying to play, and Woods does the arrogant jerk thing he’s perfected (I mean that in the nicest way). Meanwhile, Boreanaz’s role is the most baffling: he’s arguably the most famous person in this movie, but his clean-cut cop only appears long enough to banter and fight with Cal in a couple of scenes. Oh well, at least it looked like he didn’t even have to change clothes after stepping off the set of Bones. (All that’s missing is the “Cocky” belt buckle.)

That’s how it goes with this movie. Cal’s brief conversations with a priest (Tommy Flannagan) prove to be mostly pointless. A promising early case involving a cop that sexually assaulted women who resemble his ex-wife goes nowhere. The film opens with Cal making a grave, sacrificial declaration that is ultimately meaningless (on top of being a shameless attempt to hook viewers). After that opening declaration, the film — all together now — flashes back to a week earlier, but we never get a solid sense of time because we’re too busy flashing back even further during those seven days. Finally, the movie ends with a postscript describing the fate of several characters, which confusingly implies this film is based on a true story.

Officer Down is presented in an aggressively fractured, disorganized fashion that winds up mirroring Cal’s own frazzled state of mind. The problem is I’m not really convinced that’s what the filmmakers were going for.

Officer Down is presented in its original aspect ratio of 2.40:1. The 1080p image is arrived at with an AVC MPEG-4 codec at an average of 24 mbps. As Cal prowls the mean streets of Bridgeport, Conn., black levels become very important. Although they’re not as inky or deep as I’d normally want them, I didn’t mind too much. The slightly bright and yellowish tint in many nighttime scenes — courtesy of street lights and other sources — helped establish atmosphere. Overall, the image gave us great detail on the actor’s faces — every bit of stubble on Dorff’s face was accounted for — and clothes. (Or lack thereof in the strip club.) This is a satisfying, if unspectacular, video presentation.

The Dolby TrueHD 5.1 track keeps the dialogue loud, clear and in the front speakers. The rears come into play, not surprisingly, during gun fights, a sexual assault and whenever Jerome Dillon’s score pops up. The subwoofer unexpectedly rumbles to life a couple of times, but is otherwise used in a nice, subtle manner. I do wish the ambient/city noises had been a bit more consistent, since Cal spends so much time out and about. Some scenes are totally immersive — like Cal staking out the outside of a busy school — but others are disappointingly quiet.

I really wish this disc came with some special features so we could get answers to several burning questions. (Is this actually based on a true story? More importantly, what the hell happened to the paranormal thriller that had the same exact director, cast and title?)

As it stands, Officer Down is a contrived mess. However, it’s also probably not much worse than something like Broken City, which received a wide theatrical release because it stars infinitely more famous people. Director Brian A. Miller has a nice directorial eye, but the best thing this movie has going for it is Stephen Dorff. Now all we have to do is wait for Fox to give him an hour-long drama that will revive his career and officially complete his transformation into Kiefer Sutherland.