Posted in: Disc Reviews by Gino Sassani on January 25th, 2013 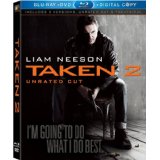 We’ve seen action films like Taken enough times that we’ve become a little immune to the formula. But then again, Liam Neeson wasn’t your typical action figure, and so the movie was able to take audiences by surprise. It’s not that Neeson hadn’t already established himself as a fine actor. He just didn’t fit the mold we are so used to seeing. Things have changed in the couple of years since Taken had its box office run. Neeson has now done more action films, and he’s started to look more the part. The clever antics of the first film are now behind us, so a sequel isn’t going to really be able to take us unaware again. And perhaps that, more than anything else, is the reason Taken 2 comes across as a bit of a disappointment.

The story itself is one of the most clever I’ve ever seen in an action film sequel. How many times do we watch an action hero rack up the body count in his or her quest to save the day? There’s enough shooting in these films to give Uncle Joe Biden nightmares. Sequels come along and our hero is back in action against new bad guys. But what about the aftermath of the first film? Don’t these guys have friends and family who might take it badly that they were killed? Of course they would, and Taken 2 starts with that very premise.

The film opens with the transportation of coffins. It’s filmed to appear much like the “coming home” of downed soldiers we’ve become accustomed to seeing on the evening news since the days of Vietnam. But these aren’t your average war heroes. These are the bodies of some of the thugs that got themselves killed in the first movie. Retired CIA operative Bryan Mills left the carnage behind when his daughter was kidnapped to be sold into sex slavery. The mastermind of that plot whom Mills tortured and killed was the son of Murad Krasnigi (Serbedzija). He leads the families of others killed in that action in a revenge plot against Mills and his family.

Mills is doing private security work now. His ex-wife Lenore (Janssen) has split from her wealthy husband, and daughter Kim (Grace) sees this as an opportunity to bring her parents back together. They take a “family” vacation in Istanbul where Krasnigi and his followers are waiting to have their revenge. At first it’s Mills and Lenore who are captured, and in a bit of a flip from the first film it’s Kim who must follow instructions to help him escape. Of course, most of the movie becomes a cat-and-mouse game where good guys and bad guys are pretty much chasing each other. Mills is definitely going to need more than ten rounds per clip as he struggles to protect his family and take out the bad guys once again.

There is plenty of action here, to be sure. Neeson inhabits the role quite well, and it’s pretty obvious he really loves the character. Rade Serbedzija is also more than a compriable bad guy. So we definitely have action and performances covered here. But that won’t be enough to really bring back the magic of the first film. The real flaw here is that one of the elements of Taken is quite obviously missing here. There are really no puzzles for Mills to solve. The film is a constant march of characters reacting to the moves of others. In the first film Mills had to go from place to place finding clues that led him from one clutch of bad guys to the other and finally to his daughter and the expected showdown. There is none of that here, and it’s a glaring omission. Neeson’s strength as an action hero is that he’s somewhat of a thinking man’s action guy. There’s no question that director Oilvier Megaton understands this. There is plenty of Neeson giving instructions starting with his catchphrase, “Now listen to me very carefully”. But it forced this time and isn’t really part of any path to the conclusion. The climax itself isn’t going to really surprise you and looks more like something you’d expect from a Dirty Harry film minus the smart remark.

What about the other elements of an action film? Let’s go to the check list, shall we?

Car Chase…check. Kim gets to do the driving in this chase. It’s quite silly, however. The girl flunked her driving test three times, and now she’s shifting like a racing pro. I don’t mind the wonderful stunt driving and precision steering. For some reason it’s that smooth and perfect shifting motion which Megaton decides to focus on that took me out of this car chase.

Gunfights….check. As Eastwood once told us, it’s okay if there’s a lot of shooting so long as the right people get shot. There’s enough bullets flying here to use up Uncle Joe’s round limitations for a couple of years.

Fisticuffs… check. There’s a pretty good hand-to-hand battle toward the climax. Unfortunately, the music completely interferes. It’s not even a loud thumping kind of score. It’s the usual orchestration, but it is louder than the sounds of the fight.

Megaton knows how to deliver action but he never quite catches the mix that Pierre Morel delivered in the first movie. There’s plenty of adrenaline, but in the end that’s really all this film has to offer. Too bad.

Taken 2 is presented in its original aspect ratio of 2.39:1. The 1080p image is arrived at with an AVC MPEG-4 codec at an average 25 mbps. I like that this film was made using actual 35mm film. There’s a nice grain element that provides just the right amount of texture and animation to the image. The high-definition image presentation retains this texture perfectly. There doesn’t seem to be an over-use of DNR work here. The result is a film that is both sharp and alive. Faces have particularly good texture and detail. Colors are pretty much natural, if a little on the cold side. Black levels are above average. There isn’t a lot of darkness here, but there is enough shadow definition to keep all shades in sharp focus.

The DTS-HD Master Audio 5.1 is often alive with explosions and gunfire. It all gets a nice boost from a pretty solid bass response. Dialog is fine most of the time, but as I’ve already mentioned I think the mixing on the score is unfortunate. It intrudes in several places and completely ruins any immersive qualities the rest of the sound field might provide.

The menu screen audio is one of the most annoying I’ve encountered. There’s this God-awful pulse that will encourage you to make your selections quickly. All of the extras are in HD.

Black Ops Field Manual: This is a viewing mode that allows you to access inside info during the film.

Sam’s Tools Of The Trade: This is an interactive feature. You get to look inside of Mills’ briefcase and select items to get a short clip. I love the idea that you can watch the clips together without going through all of the selection.

Alternate Ending: (25:00) This is more involved than most alternate endings/beginnings I’ve seen. There is an entire ending that begins with the car chase in which Lenore escapes with Mills and Kim. It was seen as taking away his motivation to continue going after the bad guys. It’s worth a look.

Fox Movie Channel Presents: In Character With Liam Neeson: (5:01) This is one of those promo pieces that often air on Fox Movie Channel. Neeson offers some brief info with a couple of behind the scenes clips.

What starts with a very clever premise ultimately leaves you feeling a little dissatisfied. That isn’t to say there aren’t some fun things to like about the movie. Keep your expectations low and try to just enjoy it for the light ride that it is, and it’s worth a rainy day rental. Of course, there is already talk of a sequel. If this keeps up the list of family and friends will continue to expand until you and I are looking to get revenge on Mills for killing our brother or in-law. On second thought… In any case, I’ll be right there watching and reporting. After all, it’s “what I do best”.

Gino Sassani is a member of the Southeastern Film Critic's Association (SEFCA). He is a film and television critic based in Tampa, Florida. He's also the Senior Editor here at Upcomingdiscs. Gino started reviewing films in the early 1990's as a segment of his local television show Focus. He's an award-winning recording artist for Omega Records. Gino is currently working on his 8th album Merchants & Mercenaries. Gino took over Upcomingdiscs Dec 1, 2008. He works out of a home theater he calls The Reel World. Favorite films: The Godfather, The Godfather Part II, The Body Snatcher (Val Lewton film with Karloff and Lugosi, not the pod people film), Unforgiven, Gladiator, The Lion King, Jaws, Son Of Frankenstein, The Good, The Bad And The Ugly, and Monsters, Inc.
30 Nights of Paranormal Activity With the Devil Hansel and Gretel Witch Hunters