Posted in: Disc Reviews by Gino Sassani on January 28th, 2013 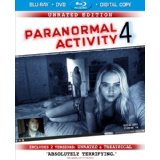 Here’s the thing. Fans of the franchise should be pleased with the latest entry. The series has been a solid October tradition for some time now. When you consider the low cost of creating one of these films with the proven box office numbers, this was all really a no-brainer, to say the least. You’re going to get more of what you are expecting, and the film throws in enough new angles and tricks to keep the idea as fresh as possible. However, there is a flip-side to all of this. I don’t think it’s very likely that you can enjoy this film quite so fully if you have not seen any of the previous films. The history is of vital importance if you’re going to appreciate where all of this is going. That isn’t to say newcomers won’t be entertained. There are enough jumps and shocks to have a relatively good time. Still, if you haven’t gotten yourself caught up in the franchise’s mythology, you might want to make that effort before going to see this film. It was my intention to watch the first three again before I saw this one. I couldn’t find the time. I wish I had. I did see the first three films, and I still feel like I needed to refresh myself before the journey into number four. Alas, that was not meant to be, and this review will suffer somewhat because of that. I very strongly encourage you to take in the story so far before venturing to your local multiplex.

You say you don’t have the time either? Here’s a quick history lesson to get you caught up. You should be warned that here there be SPOILERS of the first three films:

The first film introduced us to Katie (Featherston) and her boyfriend Micah (Sloat). Strange things are happening in their home. It starts out small: keys on the floor, strange sounds. That sort of thing. Micah decides to set up a video camera 24/7 in their bedroom and wherever else they happen to be in the hopes of capturing the mystery. What we get is a lot of mundane footage punctuated by an escalating haunting and eventual possession of Katie. It’s goodbye poor Micah, and Katie is left smiling into the camera.

The film was made for just a little over 10 grand and made $108 million in the USA alone. The idea was clever, actually, and it took the found-footage concept to a level that did away with constant shaky cameras, although not entirely. The scares were in the sounds more than anything else. More importantly, the film proved you can make money without showing any blood and guts.

The second film takes place just before the first and dovetails neatly into that story. It follows Katie’s sister Kristi (Grayden) and her husband Daniel (Boland). They are bringing home their new son Hunter. This time the footage comes courtesy of the security cameras placed both inside and outside the house. The haunting appears to center around poor little Hunter. The film introduced a possible explanation for Katie and Kristi’s familial curse. There’s hypothesizing about someone in the family having made a deal with the devil to gain wealth. I guess this also explains how everyone in this franchise lives in such nice houses, has great state-of-the-art tech toys, and doesn’t appear to actually work. The film ends with Katie killing the couple and absconding with baby Hunter. The postscript tells us they were never seen again, but we know better, don’t we?

This film pulled in a little less money but still managed $85 million on another several-grand budget. Like Dire Straits once said, it’s money for nothing. I’m not sure if the chicks were free.

Along comes the third film and a box of found video tapes by the sisters brings us back to 1988 when the girls were very young. This time Dad’s a wedding videographer (finally a working stiff) who uses VHS camcorders to capture the strange events going on in his home. The young girls have an imaginary/invisible friend named Toby who appears to be at the center of the strange goings-on. The film added a far more aggressive haunting. There was little subtlety in this one, which involved entire rooms crashing down.

The film broke the bank again, getting back up above the $100 million mark once again. When you pull in the total sales of the three fills worldwide, you get nearly a billion bucks in box office receipts. Was there any doubt we were going to see number four?

Now we’re back in the present. Couple Doug and Holly are played by real-life husband and wife Stephen Dunham and Alexondra Lee. They have a young daughter, Alex (Newton) and adopted son Wyatt (Lovekamp). This is your everyday kind of family with no apparent connection to the cursed family. Our suspicions get aroused when they take in the neighbor boy Robbie (Allen) when his mother has to go to the hospital. With the arrival of Robbie, strange, and by now familiar to fans, things arrive also. This time it’s the use of laptops, cell phone cameras, and video game motion cameras that provide the found footage. Comic relief can be found both in Alex’s older boyfriend Ben (Shively) who “accidentally” taps into Alex’s laptop camera and records her sleeping. It wasn’t him, you see. His computer “just does it”. While he doesn’t capture the hoped-for suggestive material, he captures Robbie doing some strange stuff. Thus the mission to set up the other camera coverage is begun. More comic relief can be found in a father who has apparently checked out. When the footage is shown to him, he appears completely cool that this guy was recording his teenage daughter while she was sleeping. You pretty much know the rest. Strange things are captured on the footage, and the mystery continues.

I have to say that I appear to be alone in finding the film to be worthwhile. Most of the people in my screening were pretty down on the film. Their arguments simply can’t be denied. There’s little new ground here, and there’s certainly a ton of lull in the action. I agree 100% with those assessments. Here’s where I differ. So what? What kind of new ground were you expecting? This is strictly formula here, and I don’t go to these films expecting to encounter elite philosophy or intricate story. I go there for the jumps and the fun. If that’s why you go, you won’t be quite so disappointed.

It’s not completely true that there is no new ground here. The best part of the film, for me, was the revelation of the tracking dot lights projected by the Microsoft Kinect. When viewed through infrared they flood the room with literally thousands of white dot lights that track a person’s movement to control the game. I never knew about this and have since verified this stuff is real. Not only is it a new visual turn, but it adds some of the creepiest footage of the franchise. It’s pretty eerie watching the “phantom” move, revealed only by the shifting pattern in the lights. I have to give the filmmakers some credit for creating those images.

While acting in these films has never been anything to write home, or the readers at Upcomingdiscs, about, I have to say I was quite impressed with young Brady Allen’s performance as Robbie. The kid sells the creepy stuff quite well indeed. Some of his expressions are priceless. He’s a joy to watch in action.

The film has also been touched by real-life tragedy. Stephen Dunham died suddenly of a heart attack at the young age of 48 in September. The film includes an appropriate dedication to him. It’s always sad when an actor dies before getting to see a project they worked on released. It’s doubly sad here as his real wife co-starred in the film with him.

Widescreen 1.78:1 presented in 1080p HD. This sequel is beyond appearing as a “found footage” film. A couple kids set up some HD-capable cameras to capture the odd occurrences in their house; therefore the clarity is justified. Said clarity boosts the dynamic use of the Xbox Kinect’s sensor lights in the night vision shots of the living room, making it the most unique and interesting visual gimmick in the film (or dare I say: series) that puts a modern twist to ghost sightings. The AVC codec dances around 31-33 Mbps.

English 5.1 DTS-HD Master Audio is the main track with 5.1 Dolby Digital available in French, Spanish, and Portuguese. Sound is this film’s greatest ally. The filmmakers want us to jump at everything, especially the false scares (or “the bus” for all you film academics out there) and so every sound effects volume has been cranked to the maximum. So while you’re adjusting the volume knob in order to hear the dialog, suddenly a door opening (even if it’s not quickly) rattles your eardrums. It’s a great trick since you can’t really fight against it, unless you’re willing to watch it on mute.

This set comes with a Blu Ray, DVD and Digital Download Copy of the film.

Extended Version: Included on both the Blu ray and DVD is a version that runs 10 minutes longer than the “Theatrical” version. Due to the repetitiveness of the types of stillness to thrills technique this film employs, the added scenes are masked in the overall sameness of the entire film. If you’re completely captivated by this type of “Boo!” film, then watching the extended version does no harm (except to your heart, perhaps).

The Recovered Files: That is a fancy way of saying “deleted scenes.” Half an hour of additional spooky bits that are not in either cut of this film. Though, just like the additions to the “Extended” version, they are indistinguishable from the other moments, therefore are hardly missed nor would be that intrusive if spliced back in (other than making the film unbearably long).

Finally, you need to stay through the credits. Don’t worry. They’re quite short on these films. There is an extra scene that might be a return of an earlier character. It is also rumored to be a tease for a Spanish language spinoff film that is now being prepared. Apparently the film has a huge Latino following, and Paramount might be looking to capitalize. Whatever the real intention of the scene might be, you won’t want to miss it. You can be sure it’s going to pay off down the road in some way or another. Paranormal Activity has reigned as the Halloween champ for four years now after dethroning the Saw franchise. I see Sinister positioning itself to do the same to Paranormal Activity in the not-so-near future. For now, maybe there’s still just a little more life in these legs than most people seem to believe. For now, at least, “it’s happening again”.

Gino Sassani is a member of the Southeastern Film Critic's Association (SEFCA). He is a film and television critic based in Tampa, Florida. He's also the Senior Editor here at Upcomingdiscs. Gino started reviewing films in the early 1990's as a segment of his local television show Focus. He's an award-winning recording artist for Omega Records. Gino is currently working on his 8th album Merchants & Mercenaries. Gino took over Upcomingdiscs Dec 1, 2008. He works out of a home theater he calls The Reel World. Favorite films: The Godfather, The Godfather Part II, The Body Snatcher (Val Lewton film with Karloff and Lugosi, not the pod people film), Unforgiven, Gladiator, The Lion King, Jaws, Son Of Frankenstein, The Good, The Bad And The Ugly, and Monsters, Inc.
Life’s Too Short Noobz