Posted in: No Huddle by Jonathan Foster on January 30th, 2013 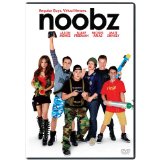 Do you have what it takes to win a video game championship? That’s the question Noobz asks and the Reign Clan tries to answer. The Reign Clan consists of four guys obsessed with Gears of War 3. There’s Cody (Blake Freeman, also the film’s co-writer and director), the anger-prone leader, and Andy (Jason Mewes of Clerks, Mallrats and pretty much every Kevin Smith movie), who is Cody’s best friend and a game store manager. There’s also the sexually confused Oliver (Matt Shively, TV’s The Troop) and “Hollywood”, who the rest of the clan believes to be Casper Van Dien.

When Cody loses his job and his wife in the same day due to his excessive game playing, he is reluctant to go compete in the CyberBowl, the nation’s premier gaming championship. It takes some doing, but Andy finally convinces him that the $400,000 prize is worth it. From there, they must overcome hilarious obstacles — including other clans, a mace-wielding mom and finding out that “Hollywood” is really a teenager (Moises Arias, TV’s Hannah Montana) — in order to win, not only the prize money, but the respect of the online gaming community.

Noobz is this millennium’s Revenge of the Nerds. It’s a very funny film that keeps the plot simple and the humor witty. Even the running gags — like Oliver’s sexual confusion and Hollywood’s asthma — aren’t overused and, therefore, remain funny.

The clan’s acting is good as well, especially Jason Mewes. While it’s not a huge stretch from his “Jay and Silent Bob” days, Mewes shows an emotional depth in this film I didn’t think he could reach. Matt Shively also shines as Oliver, doing the subtle things (like squealing “Ooooh!!” a lot) to showcase his character’s sexual ambiguity. The supporting cast, led by Jon Gries (TV’s The Pretender) and Bill Bellamy (Any Given Sunday) bring the funny just as much as the main characters, and hilarious cameos from Casper Van Dien (Starship Troopers) and G4’s Adam Sessler as themselves are the icing on the cake.

Despite the overt product placement, Noobz is a pretty darn good movie. The humor, while nerdy, is still relatable to all and gets laughs without being crude. Do yourself a favor and go get this movie before the hipsters do.