All Superheroes Must Die (Blu-ray)

Posted in: Disc Reviews by Jeremy Butler on January 30th, 2013 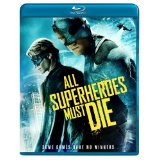 How exactly do you make a superhero movie without the powers? Answer: Have them wake up with their powers being stripped from them. All Superheroes Must Die is a superhero tale that from the title you can tell is fated not to end in the traditional way that superhero films end: with the righteous prospering and the wicked suffering. What the film title doesn’t let you know, however, is how underwhelming the film is. It does have an interesting startup, I’ll give it that. Our heroes: Charge (Jason Trost, writer/director), The Wall (Lee Valmassy, THE FP), Cutthroat (Lucas Till, X-Men First Class), and Shadow (Sophie Merkley) wake up in an abandoned town (I have to be honest; I didn’t understand many of the chosen monikers). Seeing each other comes as a shock to each of the heroes as the once-powerful unit has been separated for what the audience is forced to assume is years. Personal issues forced them apart, and now a common enemy has brought them back together: Rigshaw, a methodical sociopath with an axe to grind against the group, especially Charge, who was thought to be responsible for his supposed downfall.

Rigshaw has created a complex series of trials for the team heroes to go through, the objective for them to experience what it is like to be on the losing side for once; a series he has aptly named Role Reversal. To survive the game and save lives, the heroes will have to get past their differences and work together, but will they be able to let go of the past and work together, or will their past be the deciding factor in their destruction?

Perhaps my biggest concern with this film is how underdeveloped it is. I don’t know if the crew was in a time crunch, but more time should have been spent on developing the story. Many points that allude to a deeper story were touched on such as how the group gained their powers and the issues that caused them to break up, but more detail was needed to bring the audience up to speed.

Another factor that damaged the overall credibility of the film had to be the acting. The cast did not demonstrate the commitment necessary to engulf an audience; honestly, it barely looked like any of them were trying at all with the exception of James Remar (Dexter), but of course that is to be expected of someone of his caliber. I expected more from Lucas Till, the only cast member with a legitimate film credit and a superhero movie at that (for those of you that are clueless, I am referring to when Till played Havok in X-Men First Class).

All Superheroes Must Die is presented in an aspect ratio of 2.35:1. The 1080p image is arrived at with an AVC MPEG-4 at an average of 25 mbps. Black levels in the film are good, though they are accompanied by a slight digital noise. The overall colors of the film are muted, and the picture quality is quite clear, clear enough to make out a single piece of string hanging from the curtain where Cutthroat wakes. Speaking of the curtain, there was also some visible phasing on the curtain in Cutthroat’s opening scene. F/X and makeup for the film are sub-par, but given the probable low budget for the project can be forgiven.

The DTS-HD Master Audio 5.1 audio track does not provide an immersive feel despite several explosions and gunfire. The overall sound of the film is flat with everything generating from the front speakers. The overall volume for the film is low; you’re probably going to have to turn up the volume on your television to get the best experience.

No features on this disc.

It was an intriguing idea, though I have a sneaking suspicion that the plot came to writer/director when he was at home watching Saw with an X-Men comic book sitting in his lap. Honestly, the overall film felt more like a film student’s final project rather than an indie film, and that’s not a knock on student films; there are situations where a student film can become a successful indie film, but with the cheesy costumes and soap-opera acting, All Superheroes Must Die is not one of those situations.

Jeremy Butler is a film school graduate of the International Academy of Design and Technology. He is been writing for Upcomingdiscs since 2012; however, movies have played a big part of his life for much longer. Favorite genres include horror, science fiction/fantasy, and comedy. Favorite movies are V for Vendetta, Boondocks Saints, Kiss Kiss Bang Bang, and The Godfather.
Noobz The Duellists (Blu-ray)