Posted in: No Huddle by Brent Lorentson on February 8th, 2013 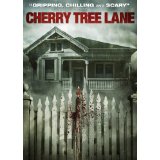 What makes the horror genre so unique is that it doesn’t have any rules, but it has one goal: to scare us.  And the weirdest thing I find about horror is that so many people enjoy being scared, and, well, some of us have watched some pretty rotten things all in the name of a cheap thrill (my reasoning for watching A Serbian Film).  Lately the trend in horror is to be in the world where our heroes on the screen are put through some very “real” situations and it kind of poses the question: how far is too far?

Cherry Tree Lane is far from an original story; I somewhat see it as Funny Games meets Ils aka Them.  This is not to insult the film by any means, but let’s face it, there have been plenty of home-invasion films, to the point it could almost be its own subgenre.  But what Cherry Tree Lane does do is put us in this real-time scenario where two parents are held captive as their captors wait for their son to come home.  The terror isn’t from the violence we see on the screen, or even off the screen for that matter; the real terror in fact isn’t violent at all, but is in fact the waiting for the impending doom we know the son has in store for him.

Writer and director Paul Andrew Williams could have made this a much more in-your-face horror film filled with exploitive rape and violence, and the result could have been very different.  Sadly, there are some out there who expect these types of films to deliver with this sort of intense violence, but for me I appreciate the less-is-more approach.  I don’t need to see the bloody remains after a character has been bludgeoned with a bat, nor do I need to see a character being raped to appreciate the horror of the situation.  Williams took a chance in hoping these acts of violence didn’t need to be seen to be felt, and I believe he delivered a stronger picture for it.

Mike (Tom Butcher) and Christine (Rachael Blake) play the married couple whose dinner is violently interrupted by their invaders.  There are some who will watch this and keep telling themselves they would act differently or put up more of a fight, but I find that hard to believe.  Sitting there watching the film, I wanted these characters to do something more, to fight back or even speak up for themselves, but instead they remain obedient because they foolishly think it will protect their son somehow.  As for the invaders, instead of street thugs or hooded assailants our villains are a gang of average teenagers.  This is another choice I found more disturbing; after all, it seems more and more common to see teenagers committing heinous acts of violence in the news.

My biggest complaint with the film falls on the interaction with Rian (Jumayn Hunter) and Mike and Christine.  Performance-wise there is nothing wrong with the scenes; I’m just of the opinion he talked too much; it’s a personal gripe, but I felt it neutered his menace.  If this was the intention, then that’s fine, I suppose.  The biggest issue I have comes with the arrival of guests Rian has come over.  As more people filled the home the tension seemed to dissipate, and with one of the new guests being a young boy it just felt like this was just becoming a setup for a scene that relied more on shock than on impact.

This film is a bit of a slow burn, and its real-time feel may make some viewers a bit antsy expecting more violence.  But for those that can appreciate horror without the gore, this is a title worth checking out.  After watching you may think twice about answering that door when someone comes a-knocking just about the time dinner is served.

Brent Lorentson is a horror writer and film critic based out of Tampa, Florida. With a BA in Digital Film, he co-wrote and co-directed Scavenger Hunt. His short stories have appeared in various horror anthologies. In 2019 his short script Fertile Blood will be a part of the anthology horror film Slumber Party. He is currently working on his first novel A Dark and Secret Place set to be released in late 2019. Favorite Films: Taxi Driver, Fight Club, I Saw the Devil, The Wild Bunch, Dawn of the Dead, A Clockwork Orange, Pulp Fiction, Heathers, The Monster Squad, and High Fidelity.
Side Effects Identity Thief