Posted in: The Reel World by Gino Sassani on February 8th, 2013 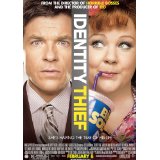 Between Jason Bateman (Office Space and Horrible Bosses) and Melissa McCarthy (Bridesmaids and Mike and Molly), whose career seems to be most on fire right now?  The idea of these two pairing would at first glance appear to be comic gold.  Instead the result is a road trip film that had me asking if it were over yet. When we first meet Sandy Patterson (Bateman), he’s just your average businessman trying to support his family.  With a new baby on the way, more money is just what he could use, and when he discovers the only people getting bonuses are his superiors, this rubs him the wrong way, and rightfully so.  So when he’s given an offer to leave the company to work for another company and get a substantial raise, the decision is a no brainer.

Too bad in Winter Park, Florida, Diana (McCarthy) has stolen Patterson’s identity and has gone on a spending spree, running up credit cards and ruining Patterson’s credit.  Things manage to get worse after Diana is arrested under Patterson’s name and in the process has a warrant sent out for Patterson.  Despite everything Diana manages to do, the film never seems to want us to dislike her, but instead they tried to make her just as sympathetic as Sandy.  If that were my only problem with the film, I’d just blow it off and just remind myself, “it’s only a movie”, but instead the film is a bit of a train wreck.

To keep his job and bring the Diana into custody, Sandy comes up with a plan sending him to Florida where he believes he can convince Diana to come back to Denver where she will clear his name and fix everything.  Anyone can guess this is a horrible plan that is sure to go wrong, and the fact that police support this idea of his is simply beyond belief.  And is it any big surprise when Sandy tracks Diana down that she doesn’t want to cooperate?  Of course not, but the film still chugs along to insult our intelligence.

Unfortunately Diana has managed to not only upset Sandy but she also has a pair of henchman after her whom she gave bad credit cards to.  Though you would think this would elevate the stakes and create some fun obstacles, all this pair seemed to do was waste more time and go nowhere.  And since the filmmakers felt the two henchmen were not enough, a skip chaser is added to the mix.  This role ended up being the most enjoyable of the film, mostly because we get to see a haggard-looking Robert Patrick attempt to do whatever it takes to bring Diana in.

What I find frustrating is this should have been better than it was.  When we get to watch Diana at work conning all the poor suckers who cross her path, she should have been the villain of the picture.  When we first meet her, she’s willing to do whatever it takes to get what she wants.  But then at some point she becomes a something that more closely resembles a clumsy fool who’s just there for the stupid hijinks to happen to.  For someone who can seem to con her way into getting anything, how is it suddenly a challenge for her to put her skills to the test when they are stuck in a middle of nowhere town with no money?

Had the film kept with a darker tone and continued to just walk the line of a black comedy, this film could have held up better to many of the more classic road pictures.  Even if the film stuck with just being a slapstick film with our characters just getting into trouble scene after scene, it would have been better.  But instead the film seemed to reject any consistency and settle for being a mess.  Even when the film tries to get into “identity theft is not a victimless crime”, suddenly our hero is willing to do the very thing that was done to him, but to his former boss.  So there went any positive message you can pull from this film.

McCarthy and Bateman do what they can to keep this a fun ride, but it simply just went on about a half hour too long.  Sure, there were some moments that squeezed a few chuckles out of me, mostly towards the beginning when Diana spins her stories to strangers about her and Sandy’s relationship.  Had this continued, a better film could have emerged, possibly.  Despite what I feel, Identity Thief will most likely make a heap of cash but will be forgotten by this time next year.

Gino Sassani is a member of the Southeastern Film Critic's Association (SEFCA). He is a film and television critic based in Tampa, Florida. He's also the Senior Editor here at Upcomingdiscs. Gino started reviewing films in the early 1990's as a segment of his local television show Focus. He's an award-winning recording artist for Omega Records. Gino is currently working on his 8th album Merchants & Mercenaries. Gino took over Upcomingdiscs Dec 1, 2008. He works out of a home theater he calls The Reel World. Favorite films: The Godfather, The Godfather Part II, The Body Snatcher (Val Lewton film with Karloff and Lugosi, not the pod people film), Unforgiven, Gladiator, The Lion King, Jaws, Son Of Frankenstein, The Good, The Bad And The Ugly, and Monsters, Inc.
Cherry Tree Lane Pig – 1334 (Blu-ray)