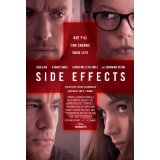 Steven Soderbergh has had a one-of-a-kind career. And if the director is to be believed, that filmmaking career comes to a close with Side Effects. (At least theatrically speaking; his Liberace biopic, Behind the Candelabra, is scheduled to air on HBO later this year.) Soderbergh may have best exemplified the idea of making “One for Me, One for Them.” (Even if the director firmly disagrees with this notion.) The theory dictates his “One for Them” flicks usually had the word Ocean’s in the title and helped fund his micro-budgeted, “One for Me” experimental films. After all, Ocean’s Thirteen also describes the number of people who saw Bubble or The Girlfriend Experience.

In recent years, the Oscar-winning director (he picked up a statue for Traffic) has turned his detached, genre-bending eye to star-studded ensemble pieces like Contagion and Haywire. (Not to mention the stud-studded hit Magic Mike.) Side Effects fits neatly into this same mold.

Emily (Rooney Mara) is anxiously awaiting the release of her husband Martin (Channing Tatum), who is finishing up a prison stint for insider trading. “Anxiously” is the key word because Emily has fallen into a pit of hopelessness, which results in her being briefly hospitalized and falling into the care of Dr. Jonathan Banks (Jude Law). As Dr. Banks treats Emily — with input from her previous psychiatrist, Dr. Victoria Siebert (Catherine Zeta-Jones) — he prescribes a variety of medication, which produces undesirable side effects like dizziness, nausea and low sex drive. (Why can’t any of these pills produce helpful side effects like softer hair or increased aptitude in math?)

The director doles out plot details at his own deliberate and assured pace. The film opens with a characteristically showy shot — the director goes under the name Peter Andrews when he acts as his own cinematographer — before we’re taken into a blood-streaked apartment and the action flashes back to three months earlier. Soderbergh’s movies are always impeccably filmed — Ocean’s Twelve was a smug mess, but my goodness did it look gorgeous — but with Side Effects the director’s camera invites closer examination. When you watch this movie a second time, the frequent close-ups of actors’ faces are probably going to take on an entirely new meaning.

Mara, with her frail frame and incredibly expressive face, is an excellent choice for Emily. (Never mind that she was the second choice after Blake Lively dropped out.) Despite these waif-like qualities, the actress also exudes the same ferocity that made her an excellent choice for the American remake of The Girl with the Dragon Tattoo. Casting Tatum — the reigning Sexiest Man Alive — as her husband was a canny choice because it gives Martin and Emily the aura of a Perfect Young Couple. That aura is crucial for Martin’s plans to get them back on top and belies the serious issues they’re dealing with.

Law has spent his career alternating between playing scoundrels (Contagion, Closer) and decent men (Sherlock Holmes, Cold Mountain), which makes him an inspired choice to star as Dr. Banks. Based on what we know about the actor, we’re not sure if he’s taking advantage of Emily and his other patients for personal gain — and to keep his wife (Vinessa Shaw) happy — or if he’s simply an overextended doctor doing the best he can. (We watch Dr. Banks casually take money from a group of pharmaceutical reps to push a drug called Deletrex, so it’s probably a little from Column A and a little from Column B.) Meanwhile, Zeta-Jones seems overqualified for her role — unfortunately, that’s been going around lately — until you realize even her seemingly severe wardrobe and demeanor have a purpose.

On the surface, this film looks like a perfectly respectable (and valid) takedown of a pharmaceutical industry that prescribes drugs which cause side effects that require — you guessed it — additional drugs. Soderbergh’s analytical, poker-faced style of storytelling serves him well as he stages moments like a woman eagerly agreeing to participate in a drug trial because the (potentially hazardous!) medicine she’d be taking will be free. However, Scott Z. Burns’ twisty script ultimately gives Soderbergh the opportunity to reach into his considerable bag of tricks and make parts of Side Effects feel like a conspiracy thriller, a courtroom drama and (in one shocking instance) a horror film.

Bouncing from one genre to another would be a fitting end to Soderbergh’s cinematic life. Then again, Jay-Z’s “retirement” lasted about five minutes and Cher has been milking her “Farewell Tour” for more than a decade. If this really is Soderbergh’s last hurrah — I’m certainly hoping it’s not, and I don’t believe it is — then Side Effects is a pretty solid way to go out.