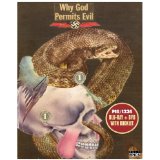 I didn’t know what to make of this Pig/1334 double bill when I took it on as my latest assignment. All I had to go on were the aggressively grotesque images on the Blu-ray case. I wasn’t yet familiar with the work of Dutch filmmaker Nico B. or former Christian Death frontman Rozz Williams. I did a bit of research, mostly because I wanted to make sure I wasn’t being handed a real-life version of the videotape from The Ring.  (Surely, there would be a less drastic way of informing me my services were no longer required on this site.) What I uncovered instead was an intriguing and haunting back story.

Pig is a 23-minute short co-directed by Nico B. and Williams, a pioneer of deathrock. (Unfortunately, I didn’t have access to too many deathrock records when I was growing up in Puerto Rico.) The short was filmed in 1997 and tells the story of a pig-masked serial killer (Williams) who ritualistically murders an unidentified man (James Hollan) in an abandoned house in the middle of Death Valley. Williams never saw the completed product because he hanged himself on April 1, 1998, shortly after finishing work on the soundtrack. (Pig premiered in Los Angeles in January 1999.)

1334 was mostly filmed in 2010 and is said to be based on true occurrences. The 17-minute film features a monstrous re-enactment of Williams’ suicide — the late rocker is played by Bill Oberst Jr. — but mostly deals with the effect it had on others, most specifically Nico B. Dante White-Aliano (himself the frontman of L.A. band Dante vs. Zombies) plays a stand-in for the Dutch director, who is haunted by Williams’ tormented soul. Or something.

To be perfectly honest, I was too confused to be properly revolted most of the time because each film assaults the viewer with surreal images. (The victim in Pig eventually has trouble distinguishing fantasy from reality; meanwhile, 1334 is essentially a ghost story.) Admittedly, some of this has to do with the fact that I was not familiar with Williams’ story. However, I believe an understanding of the circumstances surrounding any film should only serve to deepen a moviegoer’s appreciation; it shouldn’t be a prerequisite.

Pig opens with an arresting image: a pair of hands packing a briefcase with seemingly mundane items intercut with shots of a man’s naked torso showing the word “pig” carved in his chest. What struck me the most about the film was the passiveness of both the victim and his killer. Torture implies that pain is being inflicted, but the faceless victim — we never get a clear look at his visage because it’s covered in bandages — doesn’t much react to the killer’s methods (which are inspired by Williams’ bizarre book, “Why God Permits Evil”.) Neither of the films on this disc has dialogue, but even if they did, I suspect we wouldn’t be hearing the victim crying out in pain or the killer taunting him. There’s an especially provocative shot of the victim walking placidly behind the pig-faced murderer into the abandoned house in the desert followed immediately by a shot of the killer leading the man — who suddenly has his hands tied — inside through the porch.

Though there is real artistry in both these films — one of the fantasies in Pig directly references Rene Magritte’s painting “The Lovers”, while the best moment of 1334 impressively brings to life Pieter Brugel’s “The Triumph of Death” — their emotional impact feels stunted. The result seems to be an intensely personal contest to put the most bizarre and unsettling images on film.

1334 — the title is a reference to the year of the first recorded outbreak of the Black Death — particularly seems to demand a familiarity with Williams’ tragic story in order to make any sort of impact. The newer film is nowhere near as graphically violent as Pig, relying mostly on atmospheric scares — a black fog insidiously infiltrates our protagonist’s life — to tell its story.

Nico B. also employs tarot cards, a more urgent soundtrack, and a collection of visual tricks that result in 1334 feeling more forced than its predecessor. (Make sure you stay until the very end of the credits or you’ll miss a shot of the American flag burning.) The combined 40-minute running time for these two films winds up being both a blessing and curse. The limited screen time means we’re merely tourists in two filmmakers’ nightmarish vision of life, death and fantasy. On the other hand, 40 minutes is just long enough before things start to get completely tedious.

Pig and 1334 are presented in an aspect ratio of 1.33:1. The 1080p image is arrived at with an AVC MPEG-4 codec at an average of 22 mbps. Each B&W film was made for about $5,000, so the best that can be said for this video transfer is that it does an admirable job of reproducing the low-down, intentionally cruddy look the filmmakers intended. There are flecks all over the print, as well as several instances when the contrast is purposely cranked up to achieve a washed-out look. Black levels, though, are consistently strong. Basically, both of these films look like a nightmare…which is my way of saying, “Good job!”

The Dolby Digital 5.1 Surround track is completely free of dialogue and mostly free of subtlety. I did enjoy the light touch of wind whooshing in the rears during the desert scenes in Pig, but the soundtrack is otherwise comprised of sonic distortion. Things perk up a bit more in 1334 — because there’s more music in the newer film — but I think this release could’ve benefited from a more textured HD audio track.

Booklet with Production Notes and Original Scripts: We don’t usually mention bonus material that isn’t part of the disc, but this booklet is the best part of this particular release. It includes striking artwork, a reproduction of the scripts with written annotations from the filmmakers, and invaluable production notes from each film. There’s still no excuse for the complete lack of special features on the disc itself.

When I popped this into my Blu-ray player, I was afraid I’d end up starring in my own version of the scene where Nicolas Cage watches the snuff film in 8MM. These movies are obviously not my cup of tea, but they also don’t deserve to be dismissed as works of art. Still, 40 minutes’ worth of grainy film with absolutely no bonus material seems like a colossal waste of a Blu-ray disc. (Especially when there was a loaded 2002 DVD of Pig to draw from.)

Of course, if I expire seven days from now under mysterious circumstances and I’m found clutching a copy of this movie, you’ll know what happened to me.