To Rome with Love (Blu-ray) 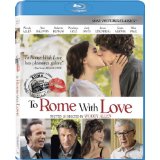 You don’t usually get too many legendary (and wildly polarizing) filmmakers coming off the biggest hit of their careers — unadjusted for inflation, of course — at age 77. Yet that’s exactly where Woody Allen found himself with To Rome with Love, his pleasant, witty, not-at-all-groundbreaking follow-up to Midnight in Paris. The writer-director originally named this film The Bop Decameron before changing it to Nero Fiddled. I’m guessing somebody (smartly) figured the suddenly buzzworthy director’s next film should have a less esoteric title; and if there was a way to incorporate a European city into the name, even better.

Luckily, the film’s more genetic moniker is actually a much better fit for this simple, engaging collection of stories set in the Eternal City. The movie is comprised of a series of parallel vignettes, but I really wish the director had found a clever way to connect these stories beyond the fact that they’re each set in contemporary Rome.

An Italian police officer directing (heh) traffic from his perch introduces us to the players. We have Hayley (Alison Pill), a tourist from New York who meets and falls in love with a Roman lawyer named Michelangelo (Flavio Parenti). When the two get engaged, Hayley’s neurotic mom and dad (Judy Davis and Woody Allen) fly in to meet Michelangelo — pronounced “Mee-chelangelo” — and his parents, including secretly gifted mortician Giancarlo (Fabio Armiliato). Meanwhile, Antonio and Milly (Alessandro Tiberi and Alessandra Mastronardi) are on honeymoon in Rome and get involved in a series of comical misunderstandings involving a hooker (Penelope Cruz) and a famous actor (Antonio Albanese).

In another part of town, a famous architect (Alec Baldwin, looking like he’s mostly there to work on his tan) is reminded of some of the mistakes he made in his love life after he meets a young man (Jesse Eisenberg) with an overly trusting girlfriend (Greta Gerwig) and the girlfriend’s sensual, volatile friend (an oddly miscast Ellen Page). Finally, we meet Leopoldo (Roberto Benigni), an exceedingly average man who inexplicably becomes a celebrity overnight.

As you can see, Allen has cobbled together his typically high-wattage cast — can’t imagine too many people turning down a few weeks in Rome to film a breezy Woody Allen movie — and mixed them together with some impressive Italian performers. If you’ve seen more than a handful of the director’s humorous offerings, you’ve noticed that a lot of the characters in a Woody Allen comedy wind up sounding like Woody Allen. In To Rome with Love, Eisenberg, Tiberi, Benigni and (naturally) Allen each do the Woody shtick in their respective vignettes. Eisenberg, in particular, is the perfect young performer to act out Allen’s hyper-intellectual, nebbishy persona, and it’s honestly a miracle he and the director hadn’t worked together before.

Meanwhile, Cruz won an Oscar for Vicky Cristina Barcelona and is terrific in this movie — despite playing what has become a tired hooker prototype in Woody Allen films — for the exact opposite reason. The Spanish sexpot commands the screen with a confidence (and cleavage) most of Allen’s characters lack. I also appreciated Baldwin’s cynical comedic stylings, the nimble big screen debut of Armiliato (one of the world’s most acclaimed tenors), and the fact that Benigni didn’t have to unleash his manic persona until late in the game.

Of course, when a director has made nearly 50 feature films at Allen’s prolific pace, some repetition is inevitable. So we once again have Allen — in his first acting role since Scoop, a gap of six years and five movies — playing a character afraid of death and who is considered to be ahead of his time as an artist. (It’s also hard to miss the part where he equates retirement to death.) His characters still drop phrases like “Ozymandias Melancholia” in casual lunchtime conversation, and the director revisits the familiar theme of adultery — played for farcical laughs here in the Antonio/Milly story — as well as the irresistibility of artistic, unstable women.

Allen still has a few tricks up his sleeve. I continue to enjoy the casualness with which Allen can present a whimsical story. (It worked very well in Midnight in Paris, and the same matter-of-factness is used to solid effect in the segment with Baldwin, Eisenberg and Page.) I also appreciated the admission in the Leopoldo vignette that, despite the constant invasion of privacy, being a celebrity isn’t exactly the worst thing in the world after all. It’s certainly more original than taking a shot at people who are “famous for being famous.” (We all just need to bite the bullet and accept the Kardashians aren’t going anywhere.)

The bottom line is nobody will place To Rome with Love in the pantheon of great Woody Allen films. Fortunately, it’s still a fun diversion; not to mention an extremely compelling argument for emptying your bank account and spending your next vacation in Italy.

To Rome with Love is presented in an aspect ratio of 1.78:1. The 1080p image is arrived at with an AVC MPEG-4 codec at an average of 28 mbps. Since the mid-2000s, Allen has basically become a wildly overqualified European travelogue director. (To be fair, he’s always had a thing for filming cities lovingly; go back and look at the opening of Manhattan.) In that regard, To Rome with Love may be his greatest achievement yet because the film glides by pretty much every major landmark in the city. The transfer delivers a warm, golden hue as well as colors — especially some of the greens hugging the exteriors of buildings — that radiate naturally rather than pop.

There are also deep black levels on display during a pair of scenes set in an opera house. Sharpness is great — the beautiful wear on the Roman architecture is visible — but not quite as meticulous as fancier HD images, which gives the image a timeless quality. Like most contemporary Allen movies, this one looks like it could’ve been filmed at any point in the last 20 years. You can decide whether that’s good or bad, but there’s no arguing this is a strong video presentation from Sony.

The DTS-HD Master Audio 5.1 track uses the front speakers to deliver the dialogue in a perfectly audible manner, which is a little important when you’re watching a movie from a guy with the most screenwriting Oscar nominations (15) and wins (3) in history. Sub activity is almost non-existent, only perking up during an operatic performance and a brief cutaway to a fashion show. The rears pump out the jaunty score and subtle atmospheric noises — traffic in the opening scene; a thunderstorm later on — without ever interfering with the words being spoken.

Con Amore: A Passion for Rome: (9:05) Allen idolizes Federico Fellini and Bernardo Bertolucci, so he jumped at the chance to film in Rome. We also learned the filmmaker doesn’t speak a word of Italian, but could somehow tell if the foreign performances were good. Of course, you won’t hear any of this from Allen himself because he’s characteristically absent from the bonus material. (I suppose we should be glad to have this featurette; usually with Allen films, all you get is the trailer.) Instead, producer Letty Aronson chats about hiring local talent and the challenges of filming in all of the city’s popular landmarks. Meanwhile, Baldwin pops up to speak glowingly of both Rome and Allen. Presented in HD.

I’m not sure if Woody Allen will ever make a great film again. (To be clear, I’m talking about a pantheon film along the lines of Annie Hall, Manhattan or Hannah and Her Sisters.) The last time he achieved any sort of greatness, in my opinion, was 2005’s Match Point.

At this point in his career, I think his ceiling is thoroughly enjoyable dramedies (ala Bullets Over Broadway) with an irresistible gimmick (Midnight in Paris) that occasionally make some noise with mainstream audiences. To Rome with Love did quite well internationally — $73 million worldwide gross; not at all bad for any modestly-budgeted Woody Allen movie — but only a fraction ($16 million) came from the United States.

Since Allen is probably going to keep cranking out these breezy, picturesque comedies until they pry the camera away from his cold dead hands, To Rome with Love should be measured against his most recent output. By those standards, this is a solid — if unspectacular — addition to his staggering filmography. This Sony Blu-ray helps things along nicely by bringing Rome into your living room.