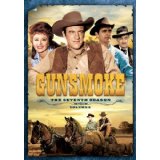 You get 17 more episodes on five discs. It’s another half season of classic television western adventure. When Doc finds old drunk Dan Whitter by the side of the road, he attempts to clean him up and get the town to show him some kindness. But will Doc’s kindness lead to murder? Find out in the set’s first episode, Old Dan. In Half Straight a killer is hired to kill Matt, but along the way he falls in love. But will it be enough to save Matt? In He Learned About Women Chester is once again taken hostage. This time it’s the famed Comancheros. When he manages to shoot one of his captors, he’s sentenced by the others to be killed at dawn. In Reprisal Matt has to shoot another outlaw, and this time the man’s widow comes looking for revenge. When a man kills someone for the bounty, it causes serious complications when Matt has no wanted poster on the dead man. Find this one in The Summons. When competition for Kitty’s comes to town Kitty might lose more than just her business if she won’t deal with the owner. It’s cutthroat business dealings in The Dreamers.

One of the best things about watching these old Western episodes is the guest stars and the recurring characters. Horror fans will enjoy seeing the often uncredited Glenn Strange as a bartender at Kitty’s. He was in tons of westerns as a bit player and also a respected stunt performer for most of his career. Horror fans remember him for playing Frankenstein in the Universal House films and Abbott And Costello Meet Frankenstein. After Boris Karloff he was the best to play the monster in Universal’s series of films. His makeup pieces were also used on Fred Gwynn when he played Herman on The Munsters. Here he can be found tending bar. I guess you could say he’s playing history’s first bouncer. “He’d start a row in an empty house.“

Gino Sassani is a member of the Southeastern Film Critic's Association (SEFCA). He is a film and television critic based in Tampa, Florida. He's also the Senior Editor here at Upcomingdiscs. Gino started reviewing films in the early 1990's as a segment of his local television show Focus. He's an award-winning recording artist for Omega Records. Gino is currently working on his 8th album Merchants & Mercenaries. Gino took over Upcomingdiscs Dec 1, 2008. He works out of a home theater he calls The Reel World. Favorite films: The Godfather, The Godfather Part II, The Body Snatcher (Val Lewton film with Karloff and Lugosi, not the pod people film), Unforgiven, Gladiator, The Lion King, Jaws, Son Of Frankenstein, The Good, The Bad And The Ugly, and Monsters, Inc.
Slugterra: Return of the Shane Gang Bonanza: The Official Complete Fifth Season