Slugterra: Return of the Shane Gang

Posted in: No Huddle by Jonathan Foster on February 13th, 2013 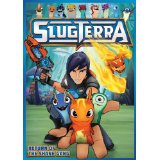 Slugterra reminds me of the cartoons from my childhood — like G.I. Joe and Teenage Mutant Ninja Turtles — where the good guys are always extolling the virtues of friendship, hard work and fair play. The show also seems to be a cross between Pokemon and Transformers, featuring competitors dueling with little creatures called “slugs” that transform into powerful beasts once they hit 100 mph.

One hundred miles beneath the Earth’s surface lies the world of Slugterra. The story revolves around young Eli Shane, an enthusiastic young “slugslinger” who wants to follow in his father’s footsteps of upholding justice and fighting evil. That evil comes in the form of Dr. Blakk, a billionaire scientist obsessed with being the best at dueling and the power that comes from that. Helping Eli fight against Dr. Blakk are his friends: Pronto, a moleniod (think mole-people) tracker with an over-inflated ego; Trixie, the slug expert and amateur filmmaker; and Kord, a cave troll and the group’s mechanic. With each new slug and adventure Eli encounters, he learns more about what it means to be a Shane while coming closer to defeating Dr. Blakk and his mutated “ghoul” slugs.

This DVD contains the first five episodes of Slugterra. The premise is laid out quickly and simply for the kids. Still, there are many mysteries to uncover and things for Eli to learn, providing for varied storylines. I enjoyed that, while each episode furthered the overall story arc, the stories weren’t formulaic and stood on their own. Even a simple thing like getting a blaster fixed (Episode 4, “The Slugout”) provides some info on Eli’s role as a Shane and his place in Slugterra. My favorite episode on the DVD was probably “Deadweed” for its Halloween jokes and because it reminded me a little of the old Scooby-Doo mysteries.

While the moral lessons can sometimes come across as cheesy, they work for this show. Eli and his crew’s adherence to their values provide a good contrast to the corrupt world Slugterra has become in the absence of a member from the Shane family. The humor — usually at the expense of Pronto or one of Dr. Blakk’s minions — is typical cartoon slapstick, but has some gems for adults, like Eli naming his electrical slug “Joules” or the Clint Eastwood-esqe squint Eli adopts during one particularly intense duel.

Of course, a cartoon would be nothing without fun characters, and Slugterra delivers. Eli is the Luke Skywalker of the group (minus the evil father), ready for adventure and eager to prove he’s worthy of the Shane family name. Like any hero, Eli needs friends to help him fight evil and get him out of tight scrapes. Pronto “the Magnificent” (or so he calls himself) is the first friend Eli makes in Slugterra. Pronto is loyal and good-hearted, but has an over-inflated ego that often gets him into trouble, like Joxer from Xena, Warrior Princess. A lot of the humor comes at his expense, like when he claims his tracking abilities are “perfect” yet he ends up getting the group lost. Trixie is the group’s Hermione (which every group needs, in my opinion), a girl with an inexhaustible knowledge of slugs yet ready to kick butt when she needs to. Last, but not least is Kord, the group’s sensitive gearhead. For such a big guy, he’s basically Kaylee from Firefly, drooling over anything mechanical. In addition to their respective strengths, each of Eli’s friends are pretty decent slugslingers in their own right. The only thing that’s truly disappointing is the show’s villain. Dr. Blakk is basically your stereotypical mad scientist hungry for power. There’s nothing in his back story or methodology to make him stand out from the rest of the villain pack. While he does look scary, he just doesn’t have that “it” factor to distinguish him from guys like Dr. Doom or Dr. Robotnik.

Overall, this is a good cartoon for kids to watch. The episodes are short (less than 30 minutes) and have enough cool-looking creatures and explosions to keep youngsters interested. The good guys always do the right thing, thwart Dr. Blakk’s minions and wind up saving the day. If I were a parent, I would definitely watch this show with my kids. I would more than likely go out and get them the next DVD set or try to find Disney XD on my TV to catch new episodes.

However, while I didn’t have a terrible time watching it, I’m definitely too old for these slugs. If you have kids, this is a cartoon they are sure to enjoy. The only drawback may be the demand for the inevitable toy line that’s sure to come from this show.

The World Beneath Our Feet, Part 1

The World Beneath Our Feet, Part 2