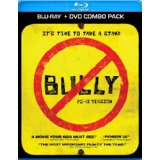 The image of what a bully looks and sounds like has changed drastically in recent years. When you and I were growing up, a “bully” was probably someone who looked like this and demanded your lunch money. Mean Girls came out less than 10 years ago; but if Tina Fey were trying to get the exact same movie made today, she’d probably have to deal with notes from a nervous studio exec worried that the Burn Book would drive one of the characters to suicide.

The film opens in Murray County, Ga. with the story of Tyler Lee Long and the heartbroken family he left behind after committing suicide at age 17. We then meet Alex Libby, a kind-hearted, socially-awkward 12-year-old from Sioux City, Iowa whose biggest offense seems to be that he has an oddly-shaped head. From there, we travel to Tuttle, Okla., home of tomboyish lesbian Kelby Johnson. Kelby’s family has been ostracized in the community after the teen came out, but she steadfastly refuses to move because, “If I leave, they win.” Then there’s the case of Ja’Meya Jackson of Yahoo County, Miss., a 14-year-old honor student who was constantly bullied until she snapped with nearly tragic results. Finally, we meet the family of Ty Field-Smalley, who shot himself at the astonishingly young age of 11.

Although Bully is centered on these kids and their families, the documentary also takes time to explore (and admonish) the overextended and undermanned school systems that allow this behavior to take place over prolonged periods of time. Kim Lockwood — an assistant principal at Alex’s school — exhaustedly says, “Tell me how to fix this” to no one in particular early on. The biggest problem, which the film improbably dramatizes quite well, is the apathy that accompanies the more intangible forms of mental and emotional bullying.

And that’s where Bully’s genius lies. Whether it’s totally fair or not, the movie makes you feel something — maybe outrage or a pang of guilt — even if, like me, you were neither a bully nor seriously tormented as a child. (I definitely saw more than a handful of instances when someone weak was being picked on, and I minded my own business.) Sure, the comparison someone makes to the Holocaust feels heavy-handed, but I won’t even try to pretend like I didn’t cry during this movie.

The breakout star of the film is absolutely Alex Libby, so it’s no accident he earns the lion’s share of the screen time. Alex dreads the first day of school because he knows the months of abuse that lie ahead. The bus ride to school becomes a torture chamber. Alex’s sweet, exasperated mom Jackie tries to get him to talk about what’s bothering him, but the boy has become distressingly numb to the verbal and physical attacks. Things get so bad that the film offers a disclaimer informing us Hirsch had no choice but to show the footage of Alex being punched, choked and stabbed with pencils to his parents and school officials. Alex eventually admits to feeling so powerless that he thinks about becoming a bully himself.

It’s no accident the film cuts directly from Alex’s admission to Ja’Meya’s story of pulling out a gun in a crowded school bus to tame her tormentors. (A law enforcement official has little sympathy for the girl, claiming she’d only be justified in pulling out the gun if she was being physically attacked.) Meanwhile, Kelby talks about attempting suicide three times and being hit by a car with the casualness you or I might use to describe what we did on a boring Tuesday. Hirsch — who was bullied as a child — takes a very cinematic approach to telling these stories. In fact, I sometimes felt it was a bit too cinematic; a couple of instances, it really seemed like the director had posed his subjects in a way that would result in a cooler shot.

Despite all the tragedy and despair — I haven’t even mentioned Tyler Long’s mom taking us into the room where her son hanged himself and walking us through the events of the morning they found him — Bully ends on a bittersweet, hopeful note. Alex has collected a handful of friends, but Kelby has been forced to switch schools. We also see Long and Field-Smalley’s respective parents turn their grief into a passion for anti-bullying advocacy and awareness. Everyone seems to agree it’s going to take a team effort between the kids, parents, school administrators and other community leaders. This seems like a daunting — maybe even impossible — task, but “everything starts with one.”

Bully is presented in an aspect ratio of 1.78:1. The 1080p image is arrived at with an AVC MPEG-4 codec at an average of 33 mbps. The documentary blends together a sharp high-definition image (during talking head interviews and most exteriors) with lower-quality home video or surveillance footage (we’re shown Ja’Meya’s bus freakout), presenting each quite faithfully. Hirsch employs soft focus for some shots, which may be a trick to make certain parts of an image look even sharper. Colors are quite natural, and contrast is spot on. (Especially during an establishing shot of wintry Sioux City.) Though there is some aliasing at times, this is a strong video presentation that enhances Hirch’s showier approach to documentary filmmaking.

The DTS-HD Master Audio 5.1 track fills all the speakers near the beginning with a great cover of Wheatus’ “Teenage Dirtbag.” Other than that, sub and rear activity is minimal. The subs rumble to life a bit for a passing train or during one of those hellish bus rides, while the rears subtly convey the chaos of a busy school hallway. On the other hand, the dialogue comes through wonderfully during the talking head interviews and when the subjects are out and about.

With the exception of “Alex After Bully” and “Good Morning America”, all of the bonus material is presented in HD.

Special Version of Bully Edited for a Younger Audience: (47:11) This version bleeps out the most objectionable curse words and almost exclusively features footage from Alex and Kelby’s segments. It’s not quite as impactful as the feature film, but the running time makes it fit neatly into most schools’ 50-minute class periods, which is probably the point.

Deleted Scenes: (12:35) Like the film, this collection of six surprisingly optimistic scenes mostly focus on Alex, as he reveals his “Popularity Scale” and discusses making some friends. We also see Kelby rocking out in a car with her friends, and an excised profile of Caine Smith from Haltom City, Texas. Features a Play All option.

The Bully Project at Work: (7:17) Chronicles how the 900 students at Taylor Middle School in Millbrae, Calif., went on a field trip to see the film and got involved with the cause, including adding anti-bullying discussion to the curriculum. Some students also got to meet Alex.

Alex After Bully: (4:27) We catch up with Alex a couple of years later as a high school freshman with a deeper voice, plenty of friends (thanks in large part to the movie, I’m guessing) and a more assured demeanor.

Alex’s Character Sketch: (1:45) Alex’s introduction and summary of his situation; taken directly from the feature film.

Alex Raps: (2:27) Alex is asked to perform a freestyle rap at the No Bull Teen Video Awards. At first he’s nervous, but once singer Sean Kingston drops a beat, Alex shows off a pretty decent flow.

Meryl Streep on Bullying: (2:07) The Oscar winner talks about watching a Bully screener with some friends and being deeply affected. Her big hope is that the discussion about the issue of bullying will continue long after people watch the film.

Communities in Motion: (5:16) A jaunty, partially-animated presentation gives some statistics about bullying while providing methods and tactics to help combat the issue. Chronicles the recent changes in the definition of what constitutes bullying.

Sioux City After Bully: (6:32) I liked this feature because it touched on one of two major questions I had about the movie: how did Hirsch get so much access? We learn the Sioux City Community School District gave the documentary team unprecedented access because, according to Superintendent Paul Gausman, they wanted to “shake the trees” (even at the risk of looking overmatched and indifferent). Gausman also informs us the district had worked with the Waitt Foundation on some anti-bullying curriculum a dozen years before filming for Bully began.

Good Morning America: (7:57) Katie Couric interviews director Lee Hirsch, Alex Libby, his mom Jackie, and David Long (Tyler’s dad) on Good Morning America. Hirsch talks about being bullied as a kid himself and answers the other major question I had about this film: how could kids behave so abhorrently when they know they’re being filmed. Hirsch states he and his small crew were there so often, the kids — already used to living in front of cameras thanks to the rise of smartphones — simply became used to them. Couric also wonders whether bullying has actually gotten worse or if it’s just awareness that has increased.

Kevin Jennings, An Advocate’s Perspective: (2:22) Former Assistant U.S. Secretary of Education gives an impassioned plea about listening to kids if they come to you and say they are being bullied. (Telling parents is often a last resort; so if a kid tells you they are being bullied, the problem is probably much worse.) Jennings also assures kids and parents the law is on their side and that “we will never end bullying if people stand by and watch it happen.”

We Are Daniel Cui: (3:17) Daniel, a freshman goalkeeper on a varsity soccer team in Hillsborough, Calif., took heat for his poor play on a winless team. Somebody posted a photo album on Facebook of him struggling on the field. Fortunately, some friends rallied to his defense, but this featurette made me realize the film didn’t even really touch on the topic of cyberbullying. (Yikes!)

Bully, The Book: A quick plug for the book that feels like it could’ve been some sort of interactive feature.

Bully is not the most subtle documentary I’ve ever seen, but maybe the time for subtlety is over when it comes to battling this widespread, insidious issue.

The important, compelling content of Bully became almost completely overshadowed when the film was slapped with an R rating by the MPAA. (An R-rating meant the film wouldn’t be seen by unaccompanied children under 17, and that it wouldn’t be shown in most middle or high schools.) In protest of the MPAA’s decision, The Weinstein Company released an unrated cut of the film, which effectively killed its box office chances. That really showed them(?)

Fortunately, the film now arrives on home video and with that school-friendly PG-13 cut. (I still recommend you watch the full version with your kids.) With a lot of documentaries, you’re sort of left hanging because real life hasn’t finished writing the subjects’ stories. The Bully Blu-ray does an admirable job of checking in on these kids — well, Alex at least — and giving interested viewers a way of getting involved.