Posted in: Disc Reviews by Jeremy Butler on February 15th, 2013 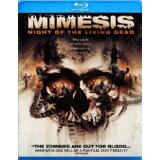 I was on the verge of writing this film off as another zombie flick hoping to capture on the popularity brought about by the AMC series The Walking Dead, but then….BAM! It brought forth a plot twist that veered it away from all other zombie movies and grabbed my attention. It was no longer a zombie film; it was much more interesting.

A group of strangers awaken after a horror convention after-party near a farmhouse. Groggy and confused, the group finds themselves in different clothes and stranded. As they try to piece together what has happened to them, they find themselves surround by zombies. Initially believing the entire spectacle to be a prank, the group attempts to find their way back home until they are attacked and the full severity of their situation sinks in.

Barricading themselves in the farmhouse, the group slowly comes to realize that the circumstance that they have found themselves in is familiar to them: the farmhouse location, the way they have been dressed, the zombies outside preparing to descend upon them, it is all from a movie: Night of the Living Dead.

Mimesis hits the ground running when the action starts with a strong opening move that I didn’t expect. I’m not going to tell you what is because it would diminish its effectiveness, but let’s just say you’ll know it when you see it. The film had a bit of a student film vibe; the opening credit for Motion Picture Institute and a slight continuity error, inconsistent lighting during the interior shot between Duane and Judith, gave me that impression. There’s a distinct difference in the sunlight coming in from the window lighting Duane, giving me an impression of a difference in time between takes. However, if it is a student film, it is quite possibly one of the best-illustrated films I have seen. I say that as a former film student, and the picture quality, especially the night sequences, impressed me. I know how difficult it can be to set up lights for night sequences; they have to be close enough to light the scene but not so close that they make the shot appear overblown; whoever lit the night scenes is very skilled.

My hat is off to the makeup and f/x team; this film had the most realistic portrayal of flesh eating I’ve seen in while. It was truly cringe-worthy watching the zombies bite and tear into the flesh of their victims; I found myself gripping the very same body part because it looked so very real.

As far as the acting goes, it was without a doubt a team effort. Separately the actors’ performances were decent but not really of note; however together they jelled and made the story all the more believable. Sid Haig has a cool monologue where he explains the meaning of the film’s title. Bravo, Sid, bravo.

Mimesis is presented in an aspect ratio of 2.35:1. The 1080p image is arrived with an AVC MPEG-4 codec at an average speed of 25 mbps. Very good picture quality, clear picture and lots of detail, the blood and flesh tearing are as good as if it were happening right in front of you. Minor lighting inconsistencies makes certain shots appear overblown as in the case of the sunlight coming through of the interior of the farmhouse. Black levels are good. Shadow definition, however, is a little weak; when the main character steps partially into the shadows, much of his shape is lost. Color-wise the film starts off warm, but as the film progresses transitions into a cooler color palette. Regardless, the colors blend well together; I especially like the use of blue during the night sequences.

The Dolby TrueHD 5.1 track gets the job with a few minor hiccups. Heavy emphasis was placed on the musical score and the ambient noise during the exterior scenes of the house; I enjoy the fact that this effort was made to provide a more immersive feel for the film, but it actually has the opposite effect, causing murder on the dialog in certain scenes such as the zombie realization scene: the two characters are on the porch of the house, the girl is trying to explain what just happened to her, and the only thing you can hear is the music. I had to use the subtitles to make most of her explanation.

There is also a separate audio commentary track featuring the director Douglas Schulze and his co-writer Joshua Wagner discussing how they came up with the concept for the film, describing what it was like working with Courtney Gains (Children of the Corn) and Sid Haig, an autograph scene that didn’t make the final cut, and paying homage to classic horror films.

It’s all about the plot twist for me; that’s what I enjoyed the most. Not to mention that any horror film that has the decency to pay homage to its predecessors, especially a horror classic like Night of the Living Dead, is worth watching.

Jeremy Butler is a film school graduate of the International Academy of Design and Technology. He is been writing for Upcomingdiscs since 2012; however, movies have played a big part of his life for much longer. Favorite genres include horror, science fiction/fantasy, and comedy. Favorite movies are V for Vendetta, Boondocks Saints, Kiss Kiss Bang Bang, and The Godfather.
Hello I Must Be Going Ben 10 Omniverse: A New Beginning, Vol. 1